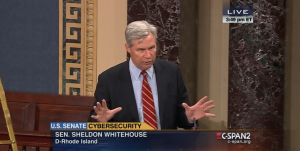 Sheldon Whitehouse just attempted (after 1:44) to rebut an epic rant from John McCain (at 1:14) in which the Arizona Senator suggested anyone who wanted to amend the flawed Cyber Intelligence Sharing Act wasn’t serious about national security.

Whitehouse defended his two amendments first by pointing out that McCain likes and respects the national security credentials of both his co-sponsors (Lindsey Graham and Max Blunt).

Then Whitehouse said,  “I believe both of the bills [sic] have now been cleared by the US Chamber of Commerce, so they don’t have a business community objection.”

Perhaps John McCain would be better served turning himself purple (really! watch his rant!) attacking the very notion that the Chamber of Commerce gets pre-veto power over a bill that (according to John McCain) is utterly vital for national security.

Even better, maybe John McCain could turn himself purple suggesting that the Chamber needs to step up to the plate and accept real responsibility for making this country’s networks safer, rather than just using our cybersecurity problems as an opportunity to demand immunity for yet more business conduct.

If this thing is vital for national security — this particular bill is not, but McCain turned himself awfully purple — then the Chamber should just suck it up and meet the requirements to protect the country decided on by the elected representatives of this country.

Yet instead, the Chamber apparently gets to pre-clear a bill designed to spy on the Chamber’s customers.