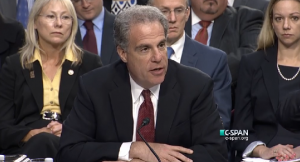 As part of today’s Senate Judiciary Hearing on DOJ OLC’s decision to make DOJ’s Inspector General ask nicely before it gets certain kinds of materials it needs to conduct its work, John Cornyn asked what changed in 2010 to make the FBI start pushing back against sharing information freely with the IG.

I was not the Inspector General at that time, but my understanding is that the memos and decisions from the legal counsel at the FBI followed several OIG reviews of the handling of National Security Letters, Exigent Letters, and other hard-hitting OIG reviews, because there was no other change in the law, no policy change, no regulatory change…

Horowitz is suggesting that because Horowitz’ predecessor, Glenn Fine, released reports that showed FBI abuse of national security programs, FBI started pushing back against sharing information. The claim is particularly interesting given that the Exigent Letters report, which was released in January 2010, significantly implicated FBI’s General Counsel’s office, including then General Counsel and now lifetime appointed judge (with Cornyn’s backing) Valerie Caproni.

The suggestion is also interesting given that Fine resigned in 2010 after starting an investigation into the use ofSection 215 and PRTT. It took years before DOJ had a working Inspector General again, resulting in a long delay before Congress got another report on how the government was using the phone dragnet.

All of which is all the more troubling, given that Horowitz revealed that,

Just yesterday, I’m told, in our review of the FBI’s use of the bulk telephony statute, a review that this committee has very much been interested in our doing, we got records with redactions, not for grand jury, Title III, or fair credit information, because those have been dealt with, but for other areas that the FBI has identified legal concerns about.

This is particularly troubling given that just weeks ago the USA Freedom Act mandated certain IG reviews of phone dragnet activities.

But the FBI is still obstructing such efforts.