Was the White House Involved in the Decision to Unapologize to Dianne Feinstein?

A must-read Jason Leopold piece on the fight between the Senate Intelligence Committee and CIA over the torture report reveals that John Brennan apologized about hacking the SSCI website — before he unapologized .

John Brennan was about to say he was sorry.

On July 28, 2014, the CIA director wrote a letter to senators Dianne Feinstein and Saxby Chambliss — the chairwoman of the Senate Intelligence Committee (SSCI) and the panel’s ranking Republican, respectively. In it, he admitted that the CIA’s penetration of the computer network used by committee staffers reviewing the agency’s torture program — a breach for which Feinstein and Chambliss had long demanded accountability — was improper and violated agreements the Intelligence Committee had made with the CIA.

“I recently received a briefing on the [OIG’s] findings, and want to inform you that the investigation found support for your concern that CIA staff had improperly accessed the [Intelligence Committee] shared drive on the RDINet [an acronym for rendition, detention, and interrogation] when conducting a limited search for CIA privileged documents,” Brennan wrote. “In particular, the [OIG] judged that Agency officers’ access to the… shared drive was inconsistent with the common understanding reached in 2009 between the Committee and the Agency regarding access to RDINet. Consequently, I apologize for the actions of CIA officers…. I am committed to correcting the shortcomings that this report has revealed.”

But Brennan didn’t sign or send the apology letter.

Instead, four days later, he sent Feinstein and Chambliss a different letter — one without an apology or admission that the search of their computer network was improper.

Leopold includes the letter as an image in his story (and also at page 299 in the SCRIBD embed). The letter he did send appears at page 11 of the embed.

In addition to the dramatically different content, the later letter does not include — as the earlier one did — notice that carbon copies of the letter were sent to DNI James Clapper, White House Counsel Neil Eggleston, and CIA’s Inspector General David Buckley.

You can see the earlier letter (see page 298) was sent by some emoticon-wielding (presumed) Assistant who explained — at 4:32 that same day — “Sending anyway, Just in case you need it soft copy for any reason. :)” 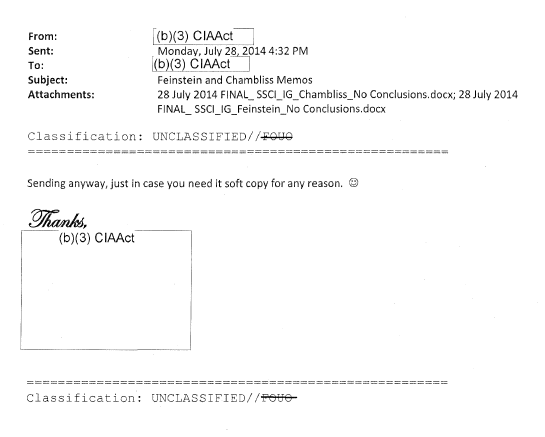 It’s as if by that point the CIA had already decided to pursue a different option (which, if we can believe the CIA’s currently operative story to Leopold, was to apologize to Senator Feinstein in person rather than memorialize such an apology in writing).

But I wonder … given that they were going to include Eggleston on the original but saw no need to include him (and Clapper and Buckley) on the finalized letter … was the White House in the loop in the decision to unapologize?