As Yahoo reported, yesterday the trial for upstate New Yorker, Glendon Scott Crawford, started. Crawford is the rare white man charged with terrorist enhancement charges — including Conspiracy to Use a WMD.

Back in 2012, Crawford, who is a member of the Ku Klux Klan, decided he was going to invent a radiation emitting device that could kill targets from a distance. He approached two local Jewish groups promising he would build them a weapon that would kill Israel’s enemies for funding; some of those he approached reported him to authorities. Then he drove to North Carolina and offered up the weapon to a Klan leader, who cooperated with the FBI in its investigation. The FBI set up undercover employees and an informant in both places to coax him along in a weapon he wanted to use against President Obama, Hillary Clinton, Andrew Cuomo, and some local Muslim organizations.

He allegedly wanted to target Obama because the “treasonous bedwetting maggot in chief … directed the ins to start bringing muzzies here without background checks” where “they don’t have to follow any laws.”

Crawford has argued — as many Muslims set up in elaborate FBI stings have before him — that nothing would have come of his conspiracy theories if the FBI hadn’t intervened.

Here, defendant Crawford had no financial resources with which to carry out the charged crime. Crawford did not have any money with which to fund this alleged scheme, and relied upon the money and debit cards provided by the government to purchase the parts necessary to assemble the remote initiation device. The defendant, identified on video as an acknowledged “conspiracy theorist”, worked as an industrial mechanic at General Electric.

He learned from the internet information that is taught in twelfth grade physics that a certain level of gamma rays directed at a source could cause radiation sickness. Defendant then contacted, among others, Congressman Gibson, area Jewish organizations and the Isreali embassy, with what he believed was a never-before considered idea – and idea only – to use on Islamic terrorists. Until his path crossed that of the government, he had never had a device or money or motivation to become involved in an actual device.

Even the complaint admits that Crawford and his alleged co-conspirator, Eric Feight, were queasy about actually using their death ray machine. 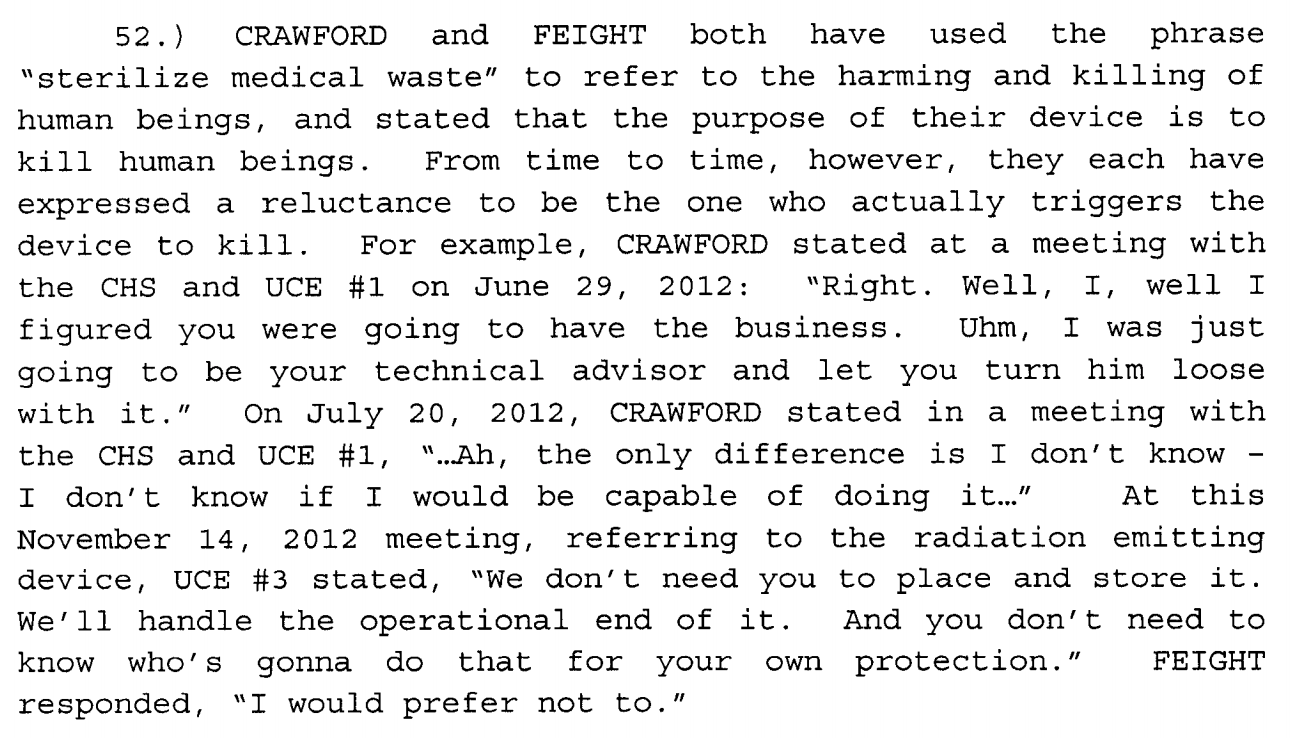 But Crawford’s arguments will be undermined because Feight has already pled guilty (and presumably will testify at trial). And he and Feight have actual expertise: Crawford is an industrial mechanic and Feight is some kind of contract engineer — both worked for a GE facility in Schenectady. While it’s true that the informant did give Crawford money to pay for his mad scientist project, he’s nowhere near as poor as many of the young men whose purported bombs the FBI funded (he could have just sold his Harley to pay for his Death Ray Machine). Basically, he was looking for investors and the FBI happened to invest.

The judge in the case, Gary Sharpe, has ruled prosecutors will be able to show off Crawford’s Death Ray Machine, which Crawford was just demoing when he was arrested.

It will be interesting to see whether an entrapment argument works any better for a white guy claiming to want to target Muslims than it has for a long string of Muslims who’ve gotten caught in the same fashion.

Update: The jury found him guilty.