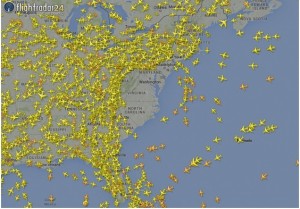 Air travelers along the U.S. east coast experienced flight cancellations and delays this past Saturday, due to initially unspecified “technical issues” attributed to the air traffic control system.

Beginning some time late morning, hundreds of flights were affected by the problem. The FAA’s service was restored around 4:00 p.m. EDT, though it would take hours longer for the airlines to reschedule flights and flyers.

Although 492 flights were delayed and 476 flights were canceled, the FAA’s Twitter account did not mention the outage or mass flight disruptions until 4:06 p.m., when it said service had been restored.

In a tweet issued long after the outage began, the Federal Aviation Administration said, “The FAA is continuing its root cause analysis to determine what caused the problem and is working closely with the airlines to minimize impacts to travelers.”

The FAA’s Safety Briefing Twitter account made no mention at all of the outage, though it has advised of GPS system testing at various locations across the country.

Various news outlets were conflicted: airports were blamed, then the FAA blamed, and the public knew nothing at all except they were stuck for an indeterminate period.

Get used to this. There’s no sign FAA will change its communications methodology after several air travel disruptions this year alone “due to technical issues” or whatever catchy nondescript phrase airlines/airports/government chooses to use.

Is this acceptable? Hell no. Just read the last version of WaPo’s article about the outage; the lack of communication causes as much difficulty as the loss of service. How can travelers make alternative plans when they hear nothing at all about the underlying problem? They’re stuck wherever they are, held hostage by crappy practices if not policies.

It doesn’t help that the media is challenged covering what appears to be a technology problem. The Washington Post went back and forth as to the underlying cause. The final version of an article about this disruption is clean of any mentions of the FAA’s En Route Automation Modernization (ERAM) system, though earlier versions mention an upgrade to or component of that system as suspect.

The most recent statement issued by the FAA on Monday evening blames an upgrade to ERAM for the outage. It’s troubling that an upgrade applied to a key regional air traffic control facility wasn’t identified more promptly as the problem. Software testing and change management processes are also in question; why was this problem identified in a production environment and not a test environment? Was this the slowest traffic period for implementation of an upgrade? And why so long to cut over to local, lower level air traffic control since they knew there had been a recent upgrade? Didn’t they anticipate a possible fail-over?

What happened after United Airline’s July 8th outage? Was there an investigation? If so, what were the findings?

Was the outage, characterized in some reports as automation-related, like this past weekend’s outage? It, too, was characterized by at least one news outlet as an automation issue.

Whatever the cause, how will outages like that on July 8th be prevented in the future?

And what happened after United Airline’s June 2nd outage? After the hour-long grounding of unspecified origin, was there an investigation and corrective action?

Were these two outages manifestations of the same problem — upgrades to existing software — or were they hardware problems?

Without follow-through by the FAA and follow-up by the media, the public can’t be certain that network equipment failures caused by hackers aren’t a wider problem. Or that airlines, airports, and the government have or haven’t done an adequate job of shielding air travel systems from solar storm radiation. 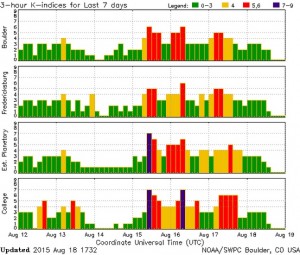 Oh, yeah, that…there was a G2-3 level solar storm, combined with the effects of an earlier coronal mass ejection on Saturday, too, which impacted electronics including ham radio.  This is at least the second time in a year when an air travel-related outage occurred about the same time as a solar event. The most obvious was New Zealand’s June 23 loss of aviation radar during one of the largest solar storms this solar cycle. Was it a coincidence that the radar went down during the storm? We don’t know because we haven’t heard anything specific about the outage’s cause.

It’s little comfort to know that New Zealand’s aviation system isn’t any better at communicating than the FAA.

You’d think the American public would learn more and faster about the loss of air traffic control of flights in and out of Washington, D.C.

Or didn’t any of the piles of tax dollars we spent post-9/11 actually do anything about communicating U.S. air traffic conditions?