Is the US Thwarting China’s Anti-Corruption (and Political Crime) Campaign to Retaliate for the OPM Hack? 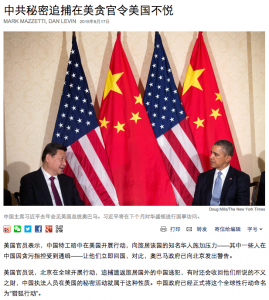 Two weeks after floating a story to the NYT the Obama asked for some creative ways to retaliate against China for the OPM hack, the NYT reported (in both English and a prominently linked Chinese translation) that “in recent weeks” the US told agents trying to chase down Chinese nationals accused of corruption to get out.

The Obama administration has delivered a warning to Beijing about the presence of Chinese government agents operating secretly in the United States to pressure prominent expatriates — some wanted in China on charges of corruption — to return home immediately, according to American officials.

The American officials said that Chinese law enforcement agents covertly in this country are part of Beijing’s global campaign to hunt down and repatriate Chinese fugitives and, in some cases, recover allegedly ill-gotten gains.

The American warning, which was delivered to Chinese officials in recent weeks and demanded a halt to the activities, reflects escalating anger in Washington about intimidation tactics used by the agents. And it comes at a time of growing tension between Washington and Beijing on a number of issues: from the computer theft of millions of government personnel files that American officials suspect was directed by China, to China’s crackdown on civil liberties, to the devaluation of its currency.

Operation Fox Hunt is not new — or secret. It has been covered before by the US press, including updates on how many people official Chinese sources claim they have gotten to return for prosecution. The NYT follow-up admits — though the original didn’t provide the same level of detail — that DHS agreed in April to prosecute Chinese economic fugitives (which would extend the US habit of asserting jurisdiction where none exists) if provided real evidence of corruption.

But in April, the Department of Homeland Security worked out a new arrangement with China’s Ministry of Public Security, which oversees Operation Fox Hunt, to assist Beijing’s efforts to prosecute economic fugitives according to United States law. American officials, however, say China has so far failed to provide the necessary evidence.

Both NYT articles mention what the WSJ reports in more depth, including details of how these operatives are working: Among the economic fugitives in the US China is aggressively pursuing is Ling Wangcheng, the brother of a former top Hu Jintao aide

Mr. Ling’s brother was a top aide to China’s previous president, Hu Jintao, but was placed under investigation by the Communist Party in December and formally accused in July of bribe-taking, adultery and illegally obtaining state secrets.

For much of 2014, Mr. Ling was living under an alias in a mansion in a gated community in Loomis, Calif., near Sacramento, with Mr. Yuan’s ex-wife, neighbors said. The couple hasn’t been seen there since around October.

Mr. Ling is now the focus of political intrigue that could overshadow a visit to the U.S. in September by China’s leader, Xi Jinping.

Diplomats and analysts said Mr. Ling might have had access through this brother to sensitive information about Chinese leaders. If he sought political asylum, Mr. Ling would be the most significant Chinese defector in decades.

It isn’t clear why Mr. Ling, 55 years old, moved to the U.S. in 2013 or 2014. He lost touch with many friends in China around last fall, a family acquaintance said, but later reassured friends he was safe in the U.S.

The implication from this — and other recent reporting on Ling — is that he did get asylum in October, and has been cooperating with US authorities.

All that is probably only tangentially related to the US leak of its earlier decision — taken precisely as the US tries to find a way to retaliate for the OPM hack — to start cracking down on this Chinese effort.

There are two things I haven’t seen mentioned in coverage of this. First, remember that the US has engaged in a similar effort, using an offer of amnesty for rich tax cheats who had stashed their money in Swiss banks (though there have been what I believe to be similar efforts on the part of the US to expose tax cheats that have mostly focused on non-US citizens).

And don’t forget the lengths to which the US went to get someone who had top secrets to come back to the US, including when it had Austria ground Evo Morales’ plane so it could search for Edward Snowden.

In any case, I suspect the US used Operation Fox Hunt as an opportunity to let China know it knew of these admitted agents. Sort of a way for the US to tell China we know where its operatives in the US are, just as it knows where our operatives are in China, thanks to the OPM hack.

For its part, China’s Xinhua paper has scolded the US for harboring crooks (and provided slightly different details of the agreement pertaining to Fox Hunt).

Corruption is not only a serious problem in China, but also in the rest of the world. And in a world which is more and more connected, countries should take coordinated efforts in fighting corruption.

Although there is no extradition agreement between the United States and China, the two countries actually have already agreed on anti-corruption cooperation.

They agreed not to provide shelter for the other side’s fugitives and would try to repatriate them in accordance with law. Specifically, Johnson also promised to actively support China’s “Sky Net” and “Fox Hunt” operations, which aim to bring back corrupt officials.

So the U.S. government’s decision to force China’s law enforcement stuff to leave the country obviously reveals that Washington lacks sincerity and has failed to translate its words into action.

Some analysts even say that the United States is reluctant to repatriate those corrupt officials for the sake of their money of course.

Therefore, the United States, as a country that often stresses the rule of law, should clarify the issue and by no means become a safe haven for Chinese criminal suspects.

The US may have decided this would be an easy way to push back on China, but that won’t prevent China from scoring points from it.