Mankiw’s tenth principle of economics is: Society faces a short-run trade-off between inflation and unemployment. He admits that this is more controversial among economists than his other principles. He says that most believe this explanation:

This line of reasoning leads to one final economy-wide trade-off: a short-run trade-off between inflation and unemployment.

This gives economic policy-makers a tool for influencing economic trends. “By changing the amount of money it prints”, says Mankiw, government can put more or less money into the economy, and thus influence unemployment, at least in the short run. The Great Crash of 2008 is an example. Mankiw explains that it was caused by “bad bets on the housing market”, and led to high unemployment and lower incomes. The Obama administration responded with a stimulus package of spending and tax cuts, and the Fed increased the amount of money in the economy, in an effort to reduce unemployment. He adds: “Some feared, however, that these policies might over time lead to an excessive level of inflation.”

The frightened people were, of course, proven absolutely wrong, though they won the policy argument with the imposition of the Sequester. The stimulus package was too small, though at least it more or less happened, and of course spending on the military increased, which helped, though it would have been nice to have something for the money besides the worthless F-35. This discussion is fleshed out beginning at about page 490 (in the 6th Ed.) with a long discussion of the Phillips Curve. This Wikipedia entry is at least cheaper than buying Mankiw’s book. for those not familiar with the subject.

This isn’t so much a principle in the sense of an axiom as it is a theorem, worked up from axioms. The source of the idea is a 1958 paper by William Phillips, showing an historical correlation between inflation and unemployment in the UK, and extended to US data by Paul Samuelson and Robert Solow. The correlation and the explanation worked together to persuade people that both the grounds of explanation and the relationship were more or less permanent features of the economy. The ideas behind the explanation are neoclassical, so the correlation served to validate those neoclassical ideas.

Recently the Wall Street Journal published an essay by Ben Leubsdorf discussing the current understanding of the Phillips Curve debate: The Fed Has a Theory. Trouble Is, the Proof Is Patchy. [Paywall]. Jared Bernstein discusses it in this post and links to this New York Times post; both are worth reading to see just how unhinged we are from the simple explanation offered by Mankiw. This chart is from the WSJ article. 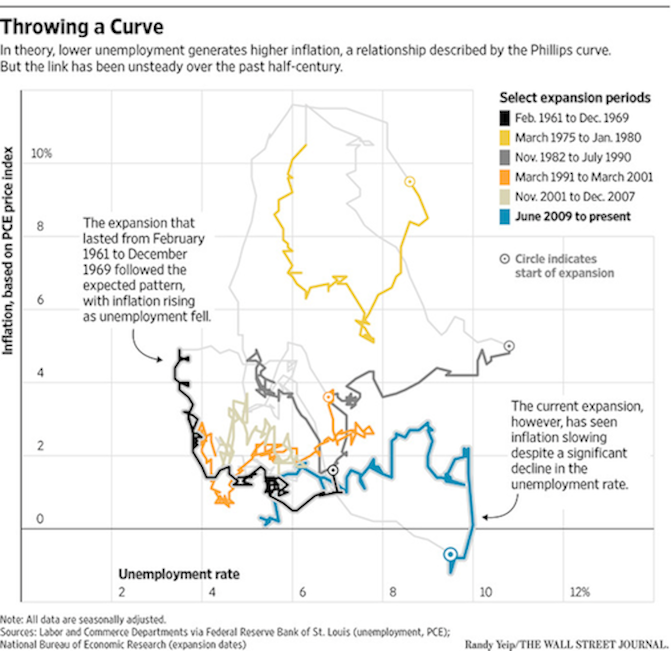 To read the chart, select an expansion, find the line in that color, and look for the circle, which is the beginning of the period. Then follow the line as it moves showing the changes in inflation (y-axis) and unemployment (x-axis). Here’s Leubsdorf’s explanation:

But the simple link between U.S. unemployment and inflation described by the Phillips curve appeared to break down after the 1960s. High inflation coexisted with high unemployment in the 1970s. In the 1990s, the jobless rate fell as price pressures weakened. Over the past three years, inflation has declined despite a falling jobless rate.

Mankiw says there is dispute among economists about this, and Leubsdorf confirms that. He says that a recent WSJ survey found that 2/3 of economists “believed that the link exists.” Here’s a quote from a believer, Atlanta Fed President Dennis Lockhart.

“In the absence of direct evidence that inflation is in fact converging to the target and in the absence of compelling or convincing direct evidence, I think a policy maker has to act on the view that the basic relationship in the Phillips curve between inflation and employment will assert itself in a reasonable period of time as the economy tightens up ….

Economists are fully aware of the problems with the Phillips Curve, and there are plenty of attempts to make it better. This is from the conclusion of an April 2015 Working Paper by Laurence Ball and Sandeep Mazumder of the International Fund:

One of Mankiw’s (2014) ten principles of economics is, “Society faces a short-run tradeoff between inflation and unemployment.” This tradeoff, the Phillips curve, is critically important for monetary policy and for forecasting inflation. It would be extraordinarily useful to discover a specification of the Phillips curve that fits the data reliably. Unfortunately, researchers have repeatedly needed to modify the Phillips curve to fit new data. Friedman added expected inflation to the Samuelson-Solow specification.

Subsequent authors have added supply shocks (Gordon, 1982), time-variation in the Phillips-curve slope(Ball et al., 1988), and time-variation in the natural rate of unemployment (Staiger et al.,1997). Each modification helped explain past data, but, as Stock and Watson (2010) observe, the history of the Phillips curve “is one of apparently stable relationships falling apart upon publication.” Ball and Mazumder (2011) is a poignant example.

Even today people are looking for a way to find something useful in past data to predict future outcomes. As Leubsdorf noted, the Fed is using some version of this curve in deciding when to raise interest rates.

So, how does this fit with neoliberalism? One of the goals of neoliberal economics is the protection of established wealth. Inflation erodes wealth. Returns to capital may or may not keep up with inflation, depending on the strength of labor and other factors of production. Debtors are able to repay their debt in less valuable dollars, which erodes the assets of creditors. If the increased returns are less than the erosion, wealth suffers. As we have seen in the wake of the Great Crash, the governing power structure of neoliberalism demands that capital be protected whether in the form of equity or debt. This principle tells policy makers to put people out of work rather than suffer inflation.

The Fed follows this principle. This is a chart of the labor share of income. 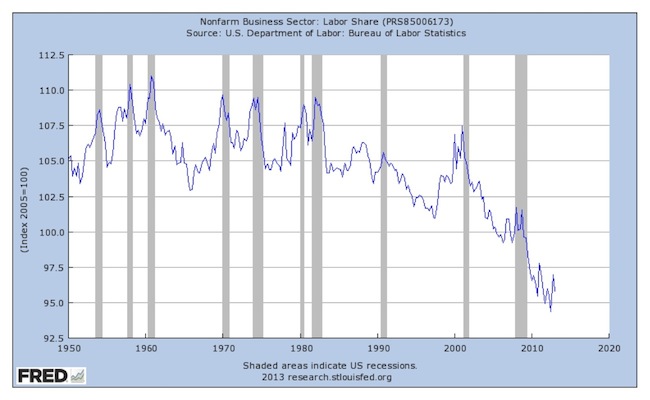 The gray vertical bars are recessions. The chart shows that as the labor share rises, we get a recession. The following chart shows bank prime rates. 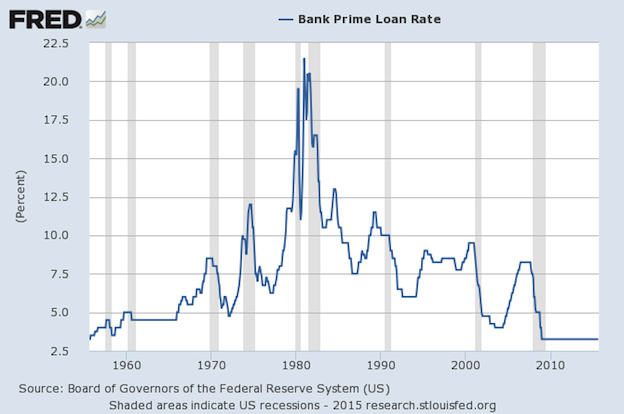 As interest rates rise, we get recessions. With the exception of the recession that followed the Great Crash, it’s fair to say that all of these recessions were engineered by the Fed because of inflation or fear of inflation.

The implications are fascinating. Before the Great Crash, almost all US money was created by bank lending and credit expansion. Mankiw’s Principle No. 9 tells us that when too much money is created, we get inflation. The Phillips Curve tells the Fed it has to raise interest rates to stem inflation, and that it does so at the cost of putting people out of jobs. So, businesses lend and borrow too much, creating inflation or fear of inflation, and to solve the problem created by the failure of capitalists, the Fed makes sure only the working people pay the price, by losing their livelihoods, and lately, by watching their incomes stagnate or drop. And that is the outcome of applying Mankiw’s Principles of Economics: damaging workers to protect the rich.