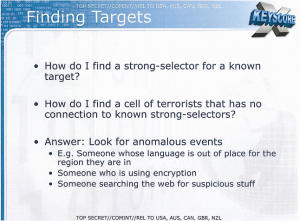 Just a few days after our Egyptian allies sentenced 3 Al Jazeera journalists to 3 years in prison, Turkey joined the club, charging 2 UK Vice employees and their Turkish fixer with terrorism. Today, Al Jazeera explained why the Vice journalists got charged: because the fixer uses an encryption technique that members of ISIS also use.

Three staff members from Vice News were charged with “engaging in terrorist activity” because one of the men was using an encryption system on his personal computer which is often used by the Islamic State of Iraq and the Levant (ISIL), a senior press official in the Turkish government has told Al Jazeera.

Two UK journalists, Jake Hanrahan and Philip Pendlebury, along with their Turkey-based Iraqi fixer and a driver, were arrested on Thursday in Diyarbakir while filming clashes between security forces and youth members of the outlawed and armed Kurdistan Workers’ Party (PKK).

On Monday, the three men were charged by a Turkish judge in Diyarbakir with “engaging in terrorist activity” on behalf of ISIL, the driver was released without charge.

The Turkish official, who spoke on condition of anonymity, told Al Jazeera: “The main issue seems to be that the fixer uses a complex encryption system on his personal computer that a lot of ISIL militants also utilise for strategic communications.”

Note, the Vice journalists were reporting on PKK, not ISIS, but it wouldn’t be the first time Turkey used ISIS as cover for their war against PKK.

A lot of people are treating this as a crazy expression of rising Turkish repression, that it conflates use of encryption — even a certain kind of encryption! — with membership in ISIS.

But they’re not the only one who does so. As the slide above — and some other documents released by Snowden — makes clear, NSA makes the same conflation. How do you find terrorists without other information, this slide asks? Simple! You find someone using encryption.

While the US might not arrest people based on such evidence (though it did hold Al Jazeera journalist Sami al-Hajj for years without charge), they certainly make the same baseless connection.