Did FBI Use Katrina as an Excuse for DIY Location Collection? 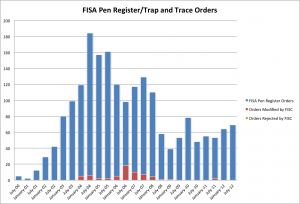 Last week, Muckrock’s Shawn Musgrave wrote a piece showing that, in the wake of Katrina and a slew of other 2005 hurricanes, in 2006 FBI’s Wireless Intercept and Tracking Team said they needed more equipment from Harris Corporation, the maker of Stingrays. They justified it because the hurricanes degraded the capabilities of something, which remains redacted. But as Musgrave notes, the storms took out a lot of the telecom infrastructure, which may be what the redacted passages describe.

“In the summer of 2005, the U.S. Gulf Coast bore the brunt of several hurricanes, including Hurricane Katrina which severely degraded the capabilities of the [redacted],” the memo reads in part. Subsequent, heavily redacted sentences suggest that the storm crippled the FBI’s capacity to conduct certain types of cell phone tracking operations via equipment on-hand at the time of landfall.

In other words, it appears that almost a year after Katrina, the FBI used the 2005 damage to telecom infrastructure as justification for getting an urgent purchase of Harris equipment, possibly Stingrays, approved.

I find the timing curious. After all, Congress approved a slew of funding right after Katrina. And Congress was debating budgetary issues in October 2005. While there’s nothing that ties this request to a budget request, it just seems odd that FBI would have identified a need in September 2005, and then sat on that urgent request until the following July. Though that July request specifically mentioning Katrina seems to be the same request that got filed in March and was in process in April that did not mention Katrina in unredacted sections. That’s not as distant from the hurricanes that purportedly identified the need, but still an odd delay for something urgent.

There’s something else that was happening in 2005 and 2006, though, that may have been as central in creating a need for Stingrays as damage to telecom equipment caused by hurricanes.

On October 14, 2005, a magistrate judge in Texas refused a request to yoke a Pen Register order onto a subscriber record subpoena to obtain location data from a telecom. Then some other magistrates started joining in. This created two problems. First, how would FBI get that location information in criminal cases. But also, in December 2005, Congress moved towards limiting the use of Section 215 orders to things that may be obtained with a subpoena, a move that would become official with the renewal of the PATRIOT Act on March 9, 2006. So even while magistrates were hashing out how the FBI might obtain such information from telecoms in garden variety criminal cases (a debate that is currently before SCOTUS), FISC and the government appear to have been having the same debate behind closed doors. In February 2006, FISC required briefing on what appears to be a parallel use of PRTT combined with a subpoena — a FISA PRTT yoked to a Section 215 order. And while the exact timing isn’t clear, we know those combined orders ended in 2006.

In other words, hurricanes may have damaged telecom infrastructure leading FBI to rely more on Stingrays. But at the same time, the legal landscape for location requests was changing, perhaps even more dramatically on the FISA side than on the criminal side.

And we know — yesterday’s change in policy admitted to FISA uses for Stingrays, though we knew this already — that FBI does use Stingrays to obtain location data under FISA as well as under criminal cases.

Katrina may have created part of the need for FBI to do more Do It Yourself location tracking, bypassing the telecoms. But legal issues created a need too, and I’d be willing to bet that the big urgency to expand FBI’s DIY location tracking abilities in 2006 had quite a bit to do with the need to find another way of location tracking, preferably one with a lot fewer people reviewing the paperwork involved.

If I’m right, then it would suggest some interesting things about the fluctuations in PRTTs (I stole the table above from EPIC). That is, in 2006, there were significant drops in PRTTs, followed by a huge drop in 2008.

On the criminal side, FBI still gets PRTT orders when it uses a Stingray. I assume the same is true on the FISA side (though it would be a lot harder to enforce here, especially because no defendant would ever get notice). But we also know the government has been hiding bulk collection under single orders, so it wouldn’t take too many orders to incorporate a lot of people.