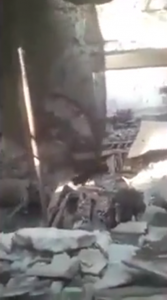 The MSF hospital in Kunduz after a US plane bombed it.

I noted yesterday how General John Campbell and Senator Dan Sullivan responded when Jeanne Shaheen raised the possibility of an independent investigation into the attack on the Médecins Sans Frontières hospital in Kunduz.

Since that time, MSF had a press conference reiterating its call for an independent investigation and released before and after video from the hospital, with lots of pictures of children receiving medical care.

Yesterday, when a journalist asked if President Obama planned to apologize to MSF, Press Secretary Josh Earnest said “we would want the investigations to be completed, to have a full accounting of what transpired, and some discussion about what next steps will be necessary,” suggesting the President would wait for the conclusions of the investigation.

While apology has been widely reported, what I have not seen reported is that Obama offered the same spiel that General Campbell offered yesterday, about how independent and swell DOD’s investigation would be.

President Obama spoke today by phone with Doctors Without Borders (MSF) International President Dr. Joanne Liu to apologize and express his condolences for the MSF staff and patients who were killed and injured when a U.S. military airstrike mistakenly struck an MSF field hospital in Kunduz, Afghanistan. During the call, President Obama expressed regret over the tragic incident and offered his thoughts and prayers on behalf of the American people to the victims, their families, and loved ones. Acknowledging the great respect he has for the important and lifesaving work that MSF does for vulnerable communities in Afghanistan and around the world, the President assured Dr. Liu of his expectation that the Department of Defense investigation currently underway would provide a transparent, thorough, and objective accounting of the facts and circumstances of the incident and pledged full cooperation with the joint investigations being conducted with NATO and the Afghan Government.

Shortly thereafter, Obama called Afghan President Ashraf Ghani, offered an apology to him too, then reiterated their ongoing cooperation.

I’m glad Obama apologized to MSF for DOD killing 22 people at their hospital, most of them MSF workers.

But given the effort to convince everyone that this investigation — which contrary to promises has already proven to be less transparent than leaks to the NYT — will be adequate, I can’t help but conclude that a similar effort at persuasion was as much the purpose of Obama’s call as any expression of remorse.

The US sure seems to want to avoid an independent investigation into this bombing. Why?

Update: And MSF isn’t buying it. Liu came reiterated her call for an independent investigation after the call.

We received President Obama’s apology today for the attack against our trauma hospital in Afghanistan. However, we reiterate our ask that the U.S. government consent to an independent investigation led by the International Humanitarian Fact-Finding Commission to establish what happened in Kunduz, how it happened, and why it happened.