The Great Transformation Part 6: Labor as a Fictitious Commodity

Previous posts in this series:

The Great Transformation: Mainstream Economics and an Introduction to a New Series

The Great Transformation Part 1: The Market

The Great Transformation Part 3: Neoliberalism Before It Got Its New Name

The Great Transformation Part 4: Reaction and Counter-Reaction To Self-Regulating Markets

In Chapter 6, Polanyi says that the theory of the self-regulating market, which is at the heart of laissez-faire and neoliberal economics, requires that all of the elements of production and consumption be subject to the price-setting mechanisms of a market, and that government is not allowed to interfere with those markets in any way. Polanyi defines commodities as things produced for sale; and markets are “contacts between actual buyers and sellers”. Following that definition, commodities are generally subject to market pricing, and that was generally true at the beginning of the Industrial Revolution, say the late 1700s. But three crucial elements of production were not at that time fully subject to markets: labor, land and money. In order for the self-regulating market to function, these three elements had to be brought under market control and freed from government regulation.

In Chapter 6, Polanyi calls these three elements “fictitious commodities”. That’s because they aren’t produced for consumption as the definition requires. Labor is human beings, who are part of society, not some product. Land stands for our natural surroundings, the place we live, and if we treat it like a cornucopia of goodies we’ll foul our own surroundings and make our lives miserable. Money is a social creation, not a commodity produced for sale.

And yet, for the self-regulating market to work, any element of humanity that extends beyond slavery, all efforts to preserve our home planet, and social control over our social creations must be stripped out, and the remains shoved into the same mold of one-dimensional value as potatoes and shoes. Anything less gives the defenders of laissez-faire and today’s neoliberals room to argue that the self-regulating market has never been allowed to do its magic and provide us with a material heaven on earth.

Polanyi discusses the impact of bringing the three fictitious commodities into market control in Chapters 14, 15 and 16. We start with the market in labor, which means the market in people’s lives. In Chapter 10, The Discovery of Society, Polanyi explains the separation of the economic and political spheres, starting with Joseph Townsend’s 1786 A Dissertation on the Poor Laws. Townsend tells the story an island populated by dogs and goats. The dogs eat the goats until there are too few to support the number of dogs. Then the dogs die down and the goats thrive. Then the dogs thrive and eat the goats, so the population of goats goes down. Here’s Townsend’s moral:

The weakest of both species were among the first to pay the debt of nature; the most active and vigorous preserved their lives. It is the quantity of food which regulates the numbers of the human species.

Here’s how Adam Smith explains it in Book 1 Chapter 8 of The Wealth of Nations:

Every species of animals naturally multiplies in proportion to the means of their subsistence, and no species can ever multiply be yond it. But in civilized society, it is only among the inferior ranks of people that the scantiness of subsistence can set limits to the further multiplication of the human species; and it can do so in no other way than by destroying a great part of the children which their fruitful marriages produce.

The liberal reward of labour, by enabling them to provide better for their children, and consequently to bring up a greater number, naturally tends to widen and extend those limits. It deserves to be remarked, too, that it necessarily does this as nearly as possible in the proportion which the demand for labour requires. If this demand is continually increasing, the reward of labour must necessarily encourage in such a manner the marriage and multiplication of labourers, as may enable them to supply that continually increasing demand by a continually increasing population. If the reward should at any time be less than what was requisite for this purpose, the deficiency of hands would soon raise it; and if it should at any time be more, their excessive multiplication would soon lower it to this necessary rate. The market would be so much understocked with labour in the one case, and so much overstocked in the other, as would soon force back its price to that proper rate which the circumstances of the society required. It is in this manner that the demand for men, like that for any other commodity, necessarily regulates the production of men, quickens it when it goes on too slowly, and stops it when it advances too fast.

It’s an unpleasant picture, but with decent nutrition and good medical care along with birth control and abortion, it’s an accurate description today. Birth rates decline in recessions and increase when the economy is booming. The difference, of course, is the element of choice available today, as this recent Wall Street Journal article explains:

While the uptick in fertility and birthrates is modest and could reverse, it appears the country’s improving economy is encouraging more couples to have children. The lingering financial toll of the recession prompted many young and less-educated Americans in particular to delay childbearing.

In Chapter 14, Polanyi describes the technique for bringing labor under market control.

To separate labor from other activities of life and to subject it to the laws of the market was to annihilate all organic forms of existence and to replace them by a different type of organization, an atomistic and individualistic one.

Such a scheme of destruction was best served by the application of the principle of freedom of contract. In practice this meant that the noncontractual organizations of kinship, neighborhood, profession, and creed were to be liquidated since they claimed the allegiance of the individual and thus restrained his freedom. To represent this principle as one of noninterference, as economic liberals were wont to do, was merely the expression of an ingrained prejudice in favor of a definite kind of interference, namely, such as would destroy noncontractual relations between individuals and prevent their spontaneous reformation.
P. 171.

Could that be closer to the neoliberal view of humans? Economic freedom is the only kind that matters, say the neoliberals. And government is to be used to enforce the kinds of contracts the neoliberals want, and strike down all contracts neoliberals don’t like. All debts are to be enforced to the letter against human beings and cities. All cooperation among workers is a restraint of trade, and is stopped by courts. All labor is available for consumption by employers, and if you don’t want to work, you are free to starve. 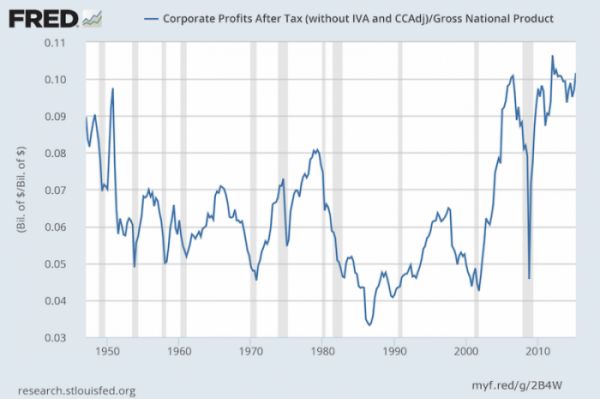 Meanwhile, the capitalists will not accept the possibility of any reduction in their take from the system, currently at absurd levels. When Donald Trump, who represents the Republican consensus, says that wages are too high, he means that returns to capital must be kept at the highest possible level. In order for profits to remain high, we have to keep wages low. Then we have to destroy the social safety net so workers will be forced to work for whatever wages are available. The lash of hunger should do the job, along with a militarized police force. This is the society envisioned by the early economists.

And, this is what Polanyi means when he talks about the dangers of treating labor like any other marketable commodity. It means the subordination of every aspect of the lives of workers to the maintenance of the wealth of the filthy rich.