As a number of outlets have reported, the Second Circuit last month upheld the government’s effort to keep a March 29, 2002 OLC memo pertaining to targeted killing secret; the opinion was unsealed yesterday. The government is probably doing so to keep changes in their rationale for why assassinations don’t violate the prohibition on assassination in EO 12333 secret.

The judges on the panel — especially Judge Jon Normand, who wrote the opinion — had pushed during an ex parte hearing in June to release language in that earlier memo because the dog & pony show around drone strikes in 2012 to 2013 had used closely related language. But after some more secret briefing, the court decided the application of EO 12333 was different enough such that it remained properly protected.

It seems highly likely the specific part of EO 12333 under discussion pertains to the assassination ban. Between the earlier hearing and the opinion, the court pointed to language in the March 25, 2010 Harold Koh speech, the March 5, 2012 Eric Holder speech, and the April 30, 2012 John Brennan speech on targeted killing (they also pointed to two Panetta comments). Each of the cited speeches discusses the assassination ban — and little else that might directly pertain to EO 12333, besides just generally covert operations authorized under Article II. There’s this language in Koh’s speech.

This language in Holder’s speech,

Some have called such operations “assassinations.” They are not, and the use of that loaded term is misplaced. Assassinations are unlawful killings. Here, for the reasons I have given, the U.S. government’s use of lethal force in self defense against a leader of al Qaeda or an associated force who presents an imminent threat of violent attack would not be unlawful — and therefore would not violate the Executive Order banning assassination or criminal statutes.

And this language in Brennan’s speech.

In this armed conflict, individuals who are part of al-Qa’ida or its associated forces are legitimate military targets.  We have the authority to target them with lethal force just as we targeted enemy leaders in past conflicts, such as German and Japanese commanders during World War II.

But even though all these public speeches commented on this interpretation of the assassination ban, the 2nd Circuit still permitted the government to shield the earlier memo.

The transcript of the June ex parte hearing reveals one explanation for that: the earlier memo was a “far broader interpretation” of the issue.

That’s consistent with the government’s earlier claim (which I wrote about here).

In other words, while the earlier memo discusses the same aspect of EO 12333 as these public speeches (again, the assassination ban is by far the most likely thing), the earlier memo uses significantly different analysis, and so it may be hidden.

The June transcript also reveals that OLC lawyers reviewed and wrote on the 2002 memo at a later time — the implication being that someone in OLC reviewed the earlier memo in 2010 when writing the Awlaki one (and curiously, that hard copy with handwritten notes is the only one DOJ claims it can find). 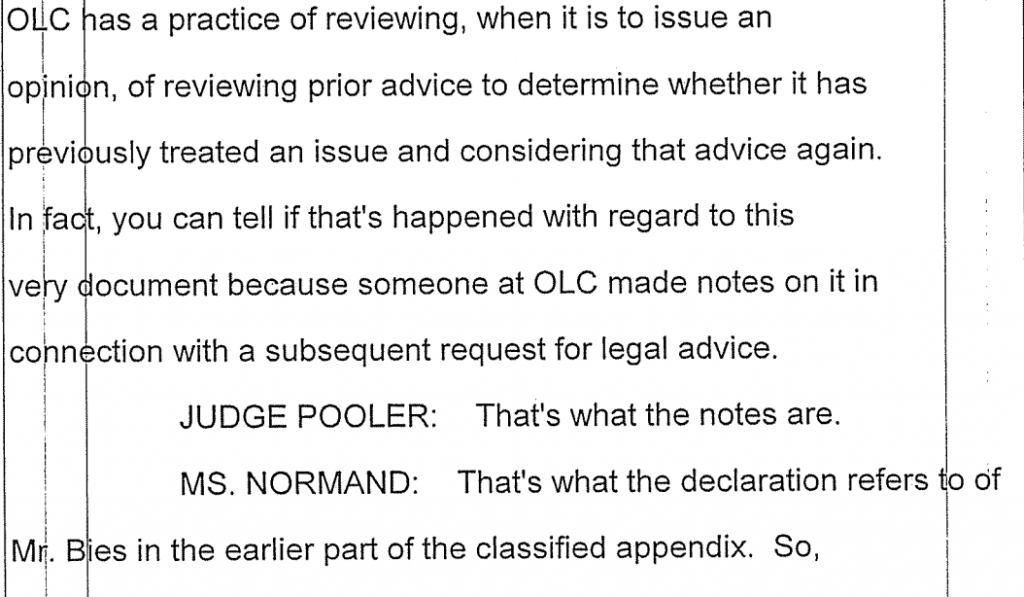 There are two things I find increasingly interesting about this earlier memo about EO 12333 — including at least one part presumably about the assassination ban. First, the implication that one of the lawyers reviewing it in 2010 saw the need to write a new memo (perhaps seeing the need to clean up yet more crazy John Yoo language? who knows). As I repeat endlessly, we know there’s a memo of uncertain date in which Yoo said the President could pixie dust the plain language of EO 12333 without changing the public language of it, and it’s possible this is what that memo did (though the President was clearly pixie dusting surveillance rules).

But I’m also interested in the date: March 29, 2002. The day after we captured Abu Zubaydah (who, at the time, top officials at least claimed to believe was a top leader of al Qaeda). The SSCI Torture Report made it clear the CIA originally intended to disappear detainees. Were they planning to execute them? If so, what stopped things?

In any case, CIA won its battle to hide this earlier discussion so we may never know. But it appears that DOJ may have felt the need to think thing through more seriously before drone assassinating a US citizen. So there is that.