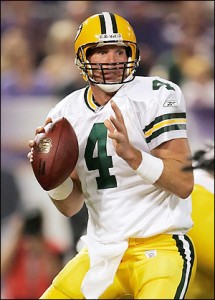 Welp, here we are upon another Thanksgiving. All of us here at Emptywheel – Marcy, Jim White, Ed Walker and me [EW: Hey! You forgot Rayne!] – are thankful for your readership, commentary and friendship. Some of you are newer, some have been with us forever, but thanks to all of you.

Marcy did a wonderful Thanksgiving food post earlier this morning. Frankly, I might not have bothered with Trash since there was a great discussion going on there. But, today is momentous. It is Brett Favre Day baybee! That’s right old man geezer himself is getting honored in the late game from The Frozen Tundra of Lambeau. And no way that could slip by without some trash talking.

I am getting old now and, still, for my money, there has never been a more joyous and exciting free spirit to watch in the NFL. Yes, obviously, it helps that he played for the team I have rooted for since I was a child. But what a joy he was. At any given instant, Favre could do something incredible or catastrophic….you never knew! But you knew he would do something. And it was usually incredible in the good direction. And on any Sunday, he was always there. Always. Only eight quarterbacks in the history of the NFL have had streaks of a hundred games or more started in a row, and only two with 200 or more. Favre had 297. 321 if you count the playoffs. That is not just the most by a quarterback ever, it is the most by any positional player in NFL history. Until last year when Peyton starting overtaking him, Favre also held nearly every meaningful passing record too. A pretty fine career. He was unique, and he was awesome. Thanks for the memories Brett.

So the Packers host the Bears tonight, where the festivities for Favre will be featured. Rodgers got a bit of his mojo back last week against the Vikings, but I still wonder about his health. The Bears took a step back against the Broncos last weekend, but played tough. They may not be great, but this years’ Bears don’t suck. This should be a great game. And what better setting to end a Thanksgiving day on?

The Lions simply destroyed the Eagles earlier. Wow, where has this version of the Kittehs been all year? Apparently it took creaky old Martha Ford to kick their asses into gear. And the Panthers at Cowboys just started, and already the Panthers have scored on a pick six off of Tony Romo. That is not what the Cowboys needed at all.

So there it is, Happy Turkey Day folks. Eat large and enjoy. Music today is by a friend of mine from long ago from the Scottsdale blues club scene. She is beautiful, and man can she sing. Please give a listen to Janiva Magness, you won’t be sorry.