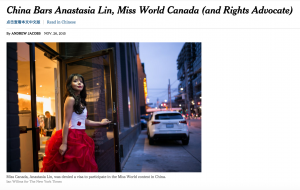 The front page of the NYT today features the story of Anastasia Lin, Chinese-born and Canadian-raised Miss Canada, who was denied entry to China for the Miss World contest.

Clasping hands with youngsters in red Communist Youth League scarves, contestants from more than 110 nations descended on the southern Chinese island of Hainan this week for the 65th annual Miss World contest.

But one contestant was absent from the opening ceremony: Miss Canada, otherwise known as Anastasia Lin, a 25-year-old actress and classically trained pianist who has been denied a Chinese visa to attend the monthlong pageant, apparently because of her outspoken advocacy for human rights and religious freedom in China.

After waiting in vain for weeks, Ms. Lin packed up her Canadian-designed eveningwear on Wednesday and quietly boarded a Hong Kong-bound flight with the hope she might obtain an on-demand visa at the border and perhaps slip unnoticed into mainland China.

It was not to be.

The Chinese authorities, tipped off to her arrival, barred her from flying onward to Hainan.

You can read the story in English or–on the web–in Mandarin.

You can also read this story, on opposition to a new cloning technology center opening in China, in Mandarin.

But Mr. Xu must contend with skeptical consumers in China, where food safety is a near obsession after scandals like melamine-tainted baby formula and recycled industrial “gutter oil.” Online reaction to the project has been overwhelmingly negative.

You can’t read this story, on Xi Jinping’s efforts to revamp the military, in Mandarin (though as the article notes, it was available in and almost entirely derived from China’s official news service, Xinhua).

You also can’t read this story, on the sentencing of human rights activist Guo Feixiong, at which he was sentenced with an extra charge on top of those he was tried on.

Yang Maodong [Guo Feixiong], a hardened veteran of political protest in southern China, knew he had virtually no hope of winning his freedom on Friday when he was brought into a courtroom to face a judge’s verdict on charges that he had disturbed public order.

Chinese judges, after all, convict and imprison indicted dissidents with metronomic consistency, reflecting the ruling Communist Party’s control of the courts. Mr. Yang — a human rights campaigner better known by his pen name, Guo Feixiong — had already prepared a statement denouncing his imprisonment.

But the Tianhe District People’s Court in Guangzhou, the capital of Guangdong Province, erupted in denunciations from Mr. Yang and his lawyers when the presiding judge revealed that he had added a new charge against the defendant — one that his lawyers had been given no chance to defend him against.
The new charge, “picking quarrels and provoking trouble,” meant that Mr. Yang would spend an additional two years in prison, according to his lawyers. Mr. Yang, who stood trial almost exactly a year ago, was convicted Friday on that charge and the original one and was sentenced to a total of six years.

Chinese law allows judges to add new charges to convictions at their own discretion. But the lawyers said that the power was rarely used, and they denounced the judge’s refusal to grant them time to prepare a considered response.

Asked by telephone Friday about the addition of the new charge, an official at the court in Guangzhou who deals with news media inquiries said, “I don’t know, and even if I did, I couldn’t tell you.” She would not give her name.

This is not the first time I’ve been struck by NYT’s selection of articles to translate into Mandarin; it did so as well with a curiously incomplete story about US expelling its Operation Fox Hound agents. I’ve noticed a few others in passing without recording what they are (but will now do so).

It really is time for NYT to explain the process by which it selects stories for translation into Mandarin. In general, it seems as if the stories that would have good propaganda value get translated — though that doesn’t explain why the Guo Feixiong story did not get translated.

But if it is basing these decisions off of propaganda value, it should also explain how it selects them. Does the State Department get a vote?

It is great for NYT to translate articles. But if it’s only doing so for those that serve US interests (and pointedly not doing so for articles that serve Chinese interests) it is really serving as a propaganda organ, not a news site.