Why the AP’s Call Record Article Is So Stupid

Update, 12/8: After ignoring corrections on Saturday, letting their story be a key prop on the Sunday shows, having me write this post on Sunday, and then re-tweeting their story Monday morning, the AP has now fact checked the AP, effectively conceding I was right and they should have fixed their story before it became a propaganda tool.

The AP engaged in willful propaganda yesterday, in what appears to be a planned cutout role for the Marco Rubio campaign. Rubio’s campaign immediately pointed to the article to make claims they know — or should, given that Rubio is on the Senate Intelligence Committee — to be false, relying on the AP article. That’s the A1 cutout method Dick Cheney used to make false claims about aluminum tubes to catastrophic effect back in 2002.

And because editor (and author of the article) Ted Bridis has ignored the multiple people pointing out the errors in the article, I’m going to take the effort to explain how stupid it is.

Here’s how it started: 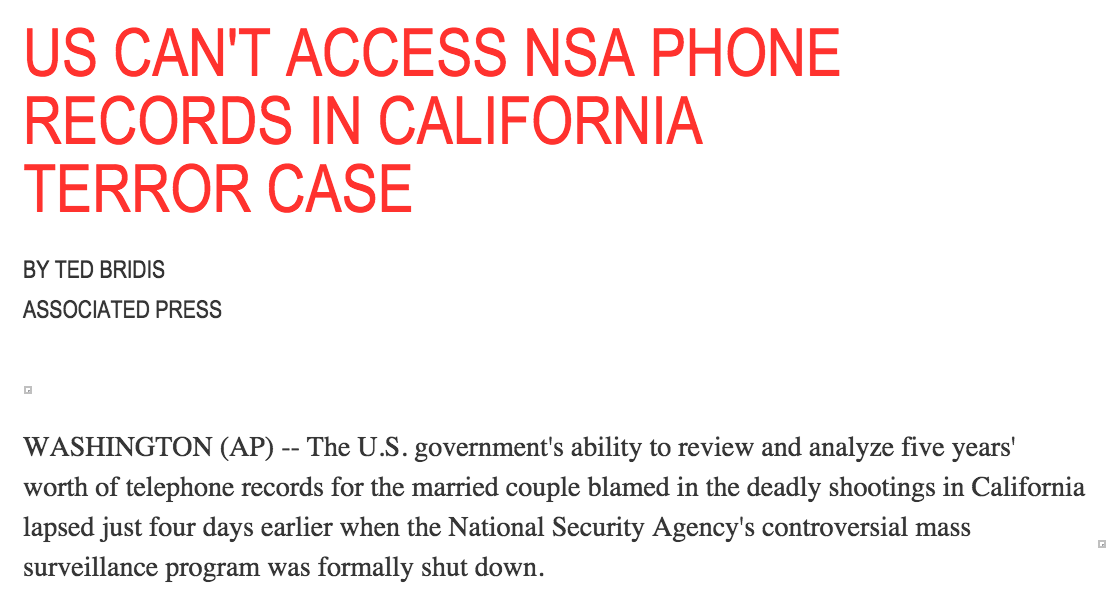 Notice how there’s no mention, in the headline or the lead, of the FBI? They’re the agency that will lead the investigation of the San Bernardino attack. That’s important because FBI has their own databases and the ability to obtain records from phone and Internet companies directly going forward (and already had, given reports from Facebook, before this article was written). The PCLOB report on the 215 phone dragnet showed that the FBI almost always accessed the information they otherwise might have gotten from the 215 dragnet via their own means. “[O]ur review suggests that the Section 215 program offers little unique value here, instead largely duplicating the FBI’s own information-gathering efforts.”

But the real problem with this utterly erroneous article is that it suggests the “US government” can’t get any records from NSA, which in turn suggests the only records of interest the NSA might have came from the Section 215 dragnet, which is of course nonsense. Not only does the NSA get far more records than what they got under Section 215 — that dragnet was, according to Richard Clarke, just a fraction of what NSA got, and according to NSA’s training, it was significantly redundant with EO 12333 collection on international calls to the US, which the NSA can collect with fewer limits as to format and share more freely with the FBI — but there are plenty of other places where the FBI can get records.

So the AP didn’t mention all the ways FBI gets records on its own, and it didn’t mention the larger NSA EO 12333 bulk collection that NSA can share more freely with FBI.

And Bridis, the author of this piece, knows it. Among the things he admitted in 140 character tweets to me was that the government also gets EO 12333 and FAA 702 information, and that his reference pertained to the Section 215 phone dragnet only.

His article, mind you, was around 700 words long. But nowhere in that 700 word article did he make what he said in a 140-character tweet clear, that Section 215 was just one program among several from which NSA (to say nothing of FBI) gets records. From that, we can only assume the AP deliberately chose to mislead its readers.

And the AP continued to do so. In the 2nd paragraph, it again suggested all historical phone records in bulk were unavailable. It also failed to mention that query results from the old dragnet — meaning the call records of anyone the NSA has deemed interesting enough to query in the past, presumably including the “subjects” government sources say Syed Rizwan Farook had communicated with — will be available to the NSA and FBI going forward and probably would have already been shared (that was made clear by the FISC order Bridis cited in the article).  In the 3rd paragraph, AP suggested the only means to get phone records was under the new USA Freedom approach. In the 4th and 5th paragraph, AP chose to cite Jim Comey not providing details on an ongoing investigation rather than Comey’s testimony to Congress (or ODNI’s recent statement on the new program) that authorities will get more records under the new program.

It wasn’t until paragraph 7 before the AP finally got around to talking about what the AP claims the story was about: the coincidence of the shut down of the old program and the beginning of the new one. Before that point, of course, the propaganda had been done.

There are two other key misleading points in this ridiculous article. AP misstated how many years of records the FBI might be able to get, claiming it was just two, rather than 28 or more in the case of AT&T’s backbone, covering virtually the entire period during which the husband from the San Bernardino couple, Farook, presumably could speak. Even while doing so, Bridis made a remarkably ironic admission: that the 2 year period of phone records allegedly available covered the entire time Tashfeen Malik was in the US.

The period covered the entire time that the wife, Tashfeen Malik, lived in the United States, although her husband, Syed Farook, had been here much longer. She moved from Pakistan to the U.S. in July 2014 and married Farook the following month.

This means that to get records for the period when, it now appears, Malik embraced radical Islam, the NSA would have to rely on EO 12333 collection, because Section 215 only included records involving someone in the US. That is, at least as it pertains to Malik, all the records the AP wrote their story about would be useless.

There’s one other irony about this story. AP has been — both as an institution and through its NatSec beat reporter Ken Dilanian, who was credulously reporting the story even before he moved to AP — among the dead-enders for the misleading claim that the Section 215 dragnet only got 30% of the phone records in the US. So if the AP believes the AP’s still uncorrected reporting, it believes that the phone dragnet only captured 30% of the calls that might help explain the San Bernardino attack. As I noted, they chose not to mention the multiple official assertions that the new program will get more records than the NSA used to get. But if the AP believes the AP’s reporting, then the AP knows that from their past reporting. Given that fact, the AP’s story should be about how great it is that this attack happened after that old gap-ridden program got replaced by one that will pull a far more comprehensive picture of anyone 2 degrees away from Farook and Malik. But the AP didn’t mention that detail.

Why isn’t the AP willing to rely on the AP’s reporting?