After some conflicting reports today about what would happen to Enrique Marquez — the long time friend of San Bernardino killer Syed Rizwan Farook, who purchased two guns used in the attack — DOJ charged Marquez on a 3-count complaint, including conspiring to materially support terrorism associated with a contemplated 2012 attack he and Farook started planning in the weeks after Anwar al-Awlaki got executed. Marquez had been cooperating for 10 days without a lawyer until yesterday (he almost demanded a lawyer part way into the first day, but was persuaded he didn’t need one). It’s unclear whether he stopped cooperating or the FBI just got bored interrogating him before charging him today. 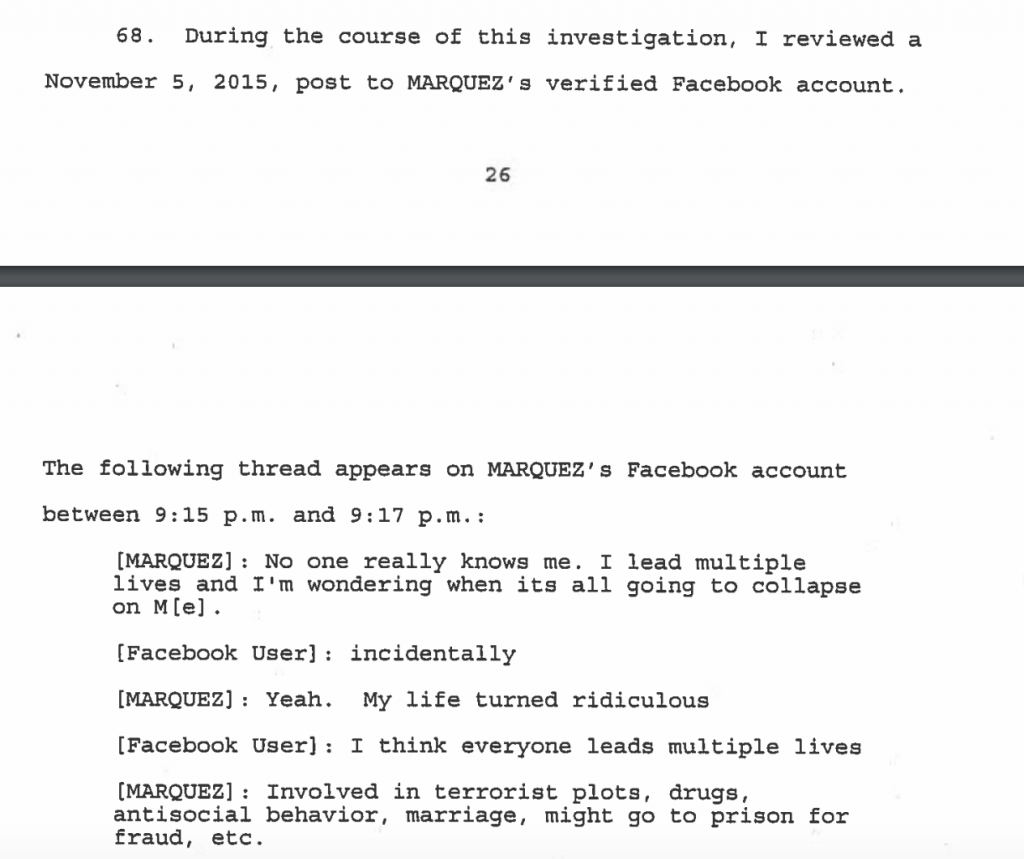 Given the timeline in the complaint, Marquez could not have been involved in the attack on the Christmas party, though he did take lunch during the period when the couple was on the run. The timeline after that is not provided: In a short period of time (though after midnight the day of the attack), he called 911, checked himself into the hospital (both times admitting he was Farook’s friend), and missed the immigration interview for his fake marriage, which will lead his fake wife (the sister of Farook’s brother’s wife) to be deported to Russia.

After Farook and Marquez called off the 2012 attack, Marquez claims he drifted apart from Farook (though how that’s consistent with fake-marrying his sister-in-law’s sister, I don’t know).

After having given extensive details of Farook, and through him, Marquez’ embrace of extremist culture up until 2012, the complaint goes silent about what Farook was consuming, raising questions for me about whether he continued to plan, or resumed plans after Tashfeen Malik came to the US.

One thing that raises questions for me is the powder allegedly used in pipe bomb intended to go off in the attack. Early on, the complaint claims the pipe bomb was “ready to detonate” ¶16. Later, it makes it clear the pipe bomb malfunctioned. Immediately after explaining that it had malfunctioned (without providing the details included in a report why it might have), the complaint ties the smokeless powder to Marquez’ purchase (for which no purchase record appears in the complaint) in 2012. 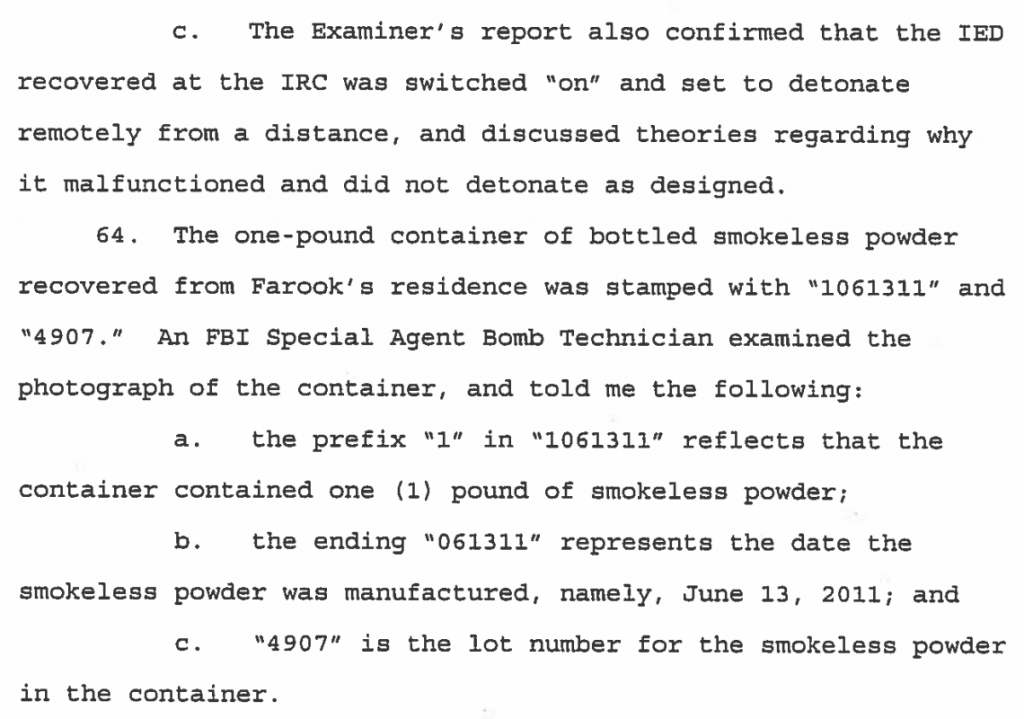 One obvious explanation for why the pipe bombs didn’t go off (aside from the fact they used a really simple Inspire recipe) is that the powder was over 4 years old by the time of the attack. Given that they had considered using bombs for the 2012 attack, the container was likely opened. Which leaves open the possibility it had degraded.

If you’re planning a new attack — and spending money to train all through that period — why not buy new powder to ensure your bomb goes off?

But there’s a counter point having to do with Farook’s apparently meticulous accounting for the attack, which he called a wedding. Farook did a spreadsheet (FBI found it on a thumb drive) of his planned attack in 2011-2012, with the earliest date October 29 and the latest presumed to be January 2, 2012. The spread sheet tracks payments for a number of things, including one of the two guns Marquez bought, as well as gun range sessions and other equipment. It stops before the purchase of the second gun (which was purchased February 22, 2012) and doesn’t resume leading up to the 2015 attack.

So either Farook got bored playing terror accountant, or there’s a continuation of this spread sheet, but we don’t know how long. There have been reports that FBI is still looking for a hard drive missing from the house, so it’s quite possible a continuation of the spread sheet continued on, perhaps up to the present, track all the money spent on shooting practice. But why track this stuff? Was someone reimbursing him? And why put it on a thumb drive?

Which brings me to the thing most outlets are focusing on, Malik’s statement of allegiance to ISIS. I have always thought this statement felt like an attempt to distract (which, if it was, it succeeded), and the description in the complaint only makes me wonder more.

The timeline in the complaint shows Malik searching for info on ISIS literally the minute before her husband arrived at the Christmas party. 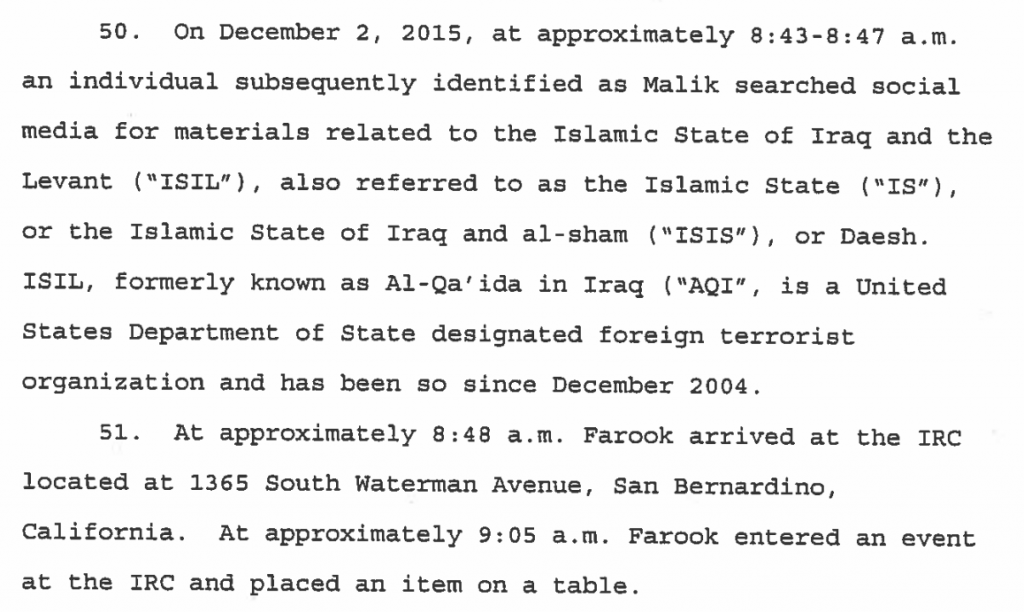 And it shows a post on a “Facebook page associated with Malik” (when the complaint talks about Marquez’ Facebook they described his verified account, though Malik is not the one being charged here) posting allegiance to Abu Bakr al-Baghdadi just 16 minutes after the SUV returned to the county center.

There’s no other mention of ISIS in the complaint (or, for that matter, what other radical Islamic propaganda the couple were consuming between 2012 and 2015).

How many involved in the shooting

Finally there’s a small but, given initial reports there were three people involved in the shooting at the county center, potentially significant discrepancy. Early in the complaint, the FBI describes two individuals conducting the shooting.

Whereas later the complaint is not so sure how many people there were.

There were reports that survivors recognized Farook when the shooting started, which says if there was just one shooter, it was him. But at least given what we know, there’d be no reason for Malik to stay in the SUV, as there’s no reason to believe she drove (she had no driver’s license mentioned, and of course lived much of her life in Saudi Arabia). Remember, too, there were four guns total used in the attack.