Just before the election this fall, the US war in Afghanistan will pass its fifteenth birthday, making it old enough to obtain a driving learner’s permit in most states. Despite the fact that the Taliban government fell after only eight days of the war, the US has inexplicably stayed in the country, ostensibly maintaining peace, eliminating a small force of al Qaeda and “training” Afghan defense forces to take over. During that time the US has expended an ungodly amount of money, lost thousands of US troops and been present for much larger losses of life throughout a country that also has seen unacceptable numbers of internally displaced people. All of this has taken place while Afghanistan has continuously been found at or near the top of the list of the most corrupt nations on the globe.

Now, nearly fifteen years into the misadventure, we see that conditions in Afghanistan are deteriorating at an ever increasing rate. The Special Inspector General for Afghanistan Reconstruction today issued its 30th in its series of quarterly reports to Congress (pdf). Nothing in the report provides any hope that Afghanistan will emerge from the US war nightmare as a functional country any time soon.

Violence levels in Afghanistan are at an all-time high. SIGAR relied on UN data to provide this illustration of violence levels over time: 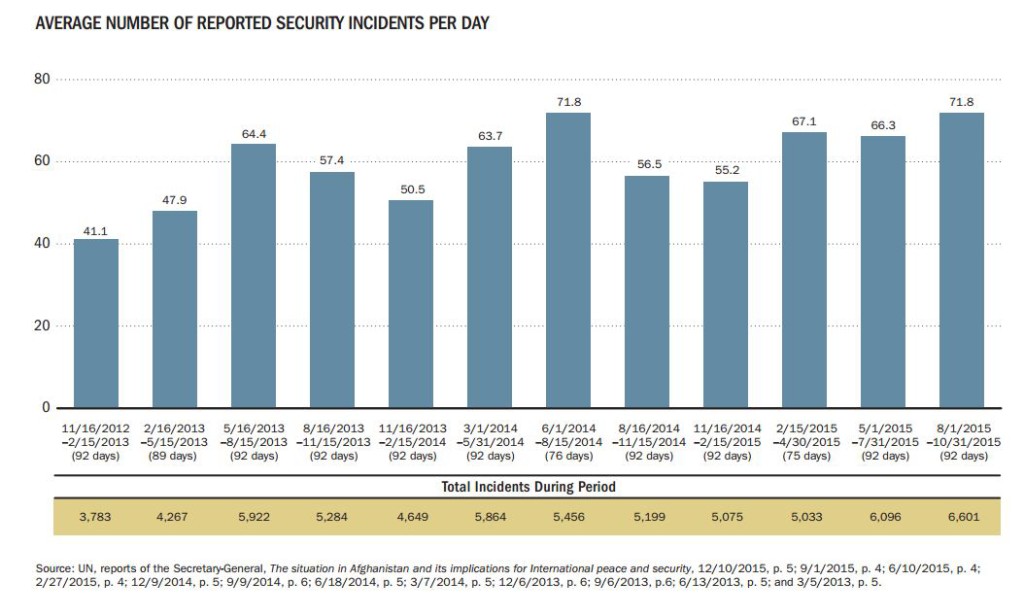 Another key feature of the US “activities” in Afghanistan has been the “training” of Afghan forces to step up and take over primary responsibility for defense of the the country. The US has disbursed over $56 billion in this training and equipping effort. After years of SIGAR reports carefully documenting the numbers of Afghan troops trained and the capabilities of those forces, we suddenly encountered a wall of classification of Afghan troop capabilities last year as the US effort in Afghanistan was “ending”.

Today’s report states that Afghanistan reports a fighting force of 322,638 out of a target size of 360,004. However, SIGAR notes that AP has seen through the ruse that Afghanistan uses in its self-reporting of troop numbers:

However, a January Associated Press report alleged that the actual number of ANDSF security forces is far less because the rolls are filled with nonexistent “ghost” soldiers and police officers. In that report, a provincial council member estimated 40% of the security forces in Helmand do not exist, while a former provincial deputy police chief said the actual number was “nowhere near” the 31,000 police on the registers, and an Afghan official estimated the total ANDSF number at around 120,000—less than half the reported 322,638. The success of military operations is at risk, because as one Afghan soldier in Helmand said, they do not have enough men to protect themselves. Additionally, an Afghan lawmaker claimed the government is not responding to the crisis because a number of allegedly corrupt parliamentarians are benefiting from the “ghost” security forces salaries.

SIGAR points out that they have long questioned the reliability of ANSF size and capability reporting, so the AP report should be of no surprise to anyone. Given these issues of the real fighting force size for Afghanistan, it also should come as no surprise that the Pentagon has cut back on how much information it releases. In today’s report, that is marked by this statement:

This quarter, details of ANDSF force strength at corps level and below remained classified. SIGAR will report on them in a classified annex to this report.

A key aspect of what remains classified is most of the information on Afghan troop capabilities. However, the abject failure of these troops can be seen in the assessment of how much of the country has fallen back into Taliban hands:

And yet, the mass delusion within the Pentagon persists, as that bleak paragraph above ends with this unbelievable sentence:

However, DOD remains optimistic that the ANDSF continues to improve its overall capability as the capabilities of the insurgent elements remain static.

This completely unfounded and contrary to all available data assessment by DOD of the situation in Afghanistan says everything we need to know about how these geniuses have failed at every step of the way in a mission that has mired the US in a quagmire that anyone could have predicted before the first bomb fell.