DEQ Employees Seem Unwilling to Take the Fall for Flint

During yesterday’s Congressional hearing — and really, since the Governor’s hand-picked Task Force first gave him an interim report in December — employees from Michigan’s Department of Environmental Quality have come in for most of the blame for poisoning Flint.

But today, Progress Michigan published some emails that suggest DEQ’s employees are unwilling to take the fall, at least not by themselves. They show that in March of last year, a supervisor in Gennesee County’s health department wrote people in Flint and at DEQ asking for help with data on water quality after getting no response to a FOIA in January 2015.

In the email, the supervisor noted that a spike in Legionnaires coincided with the switch to Flint’s water. Jerry Ambrose was then the Emergency Manager of Flint; it’s unclear why he was using a GMail address as EM. 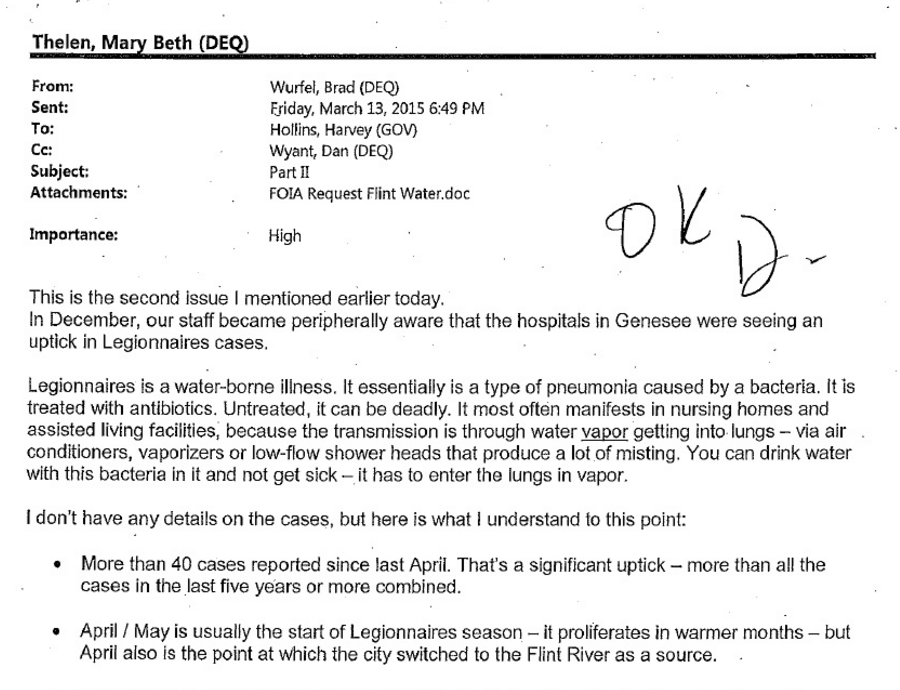 As I noted here, in December, in response to a recommendation from Governor Snyder’s hand-picked Flint Task Force, the governor picked Hollins to be the single “independent” person overseeing response to the Flint crisis. It was absurd to pick him in the first place, because (as this shows) Hollins had been personally involved all along. But he is, at least on paper, in charge of response.

In other words, the email chain shows that both Snyder’s hand-picked EM and the guy in charge of liaising with Flint knew, over a year ago, that Legionnaires (which has since killed at least 9 people) might be tied to the water switchover.

Progress Michigan doesn’t note how they came by this email. But it’s pretty clear it was Wyant’s personal copy of it. In December — in response to another suggestion by the Task Force — Snyder had Wyant resign. Since then, Attorney General Bill Schuette pointed to Wyant’s resignation (which he originally expressed sadness about) to justify opening up his own investigation into the crisis.

All of which suggests to me that Wyant is unwilling to be the sole scapegoat for this crisis.