When your Monday begins to drag — and you know it will at some point — put on a little mambo.

Especially Perez Prado‘s Mambo Number 5 and Mambo Number 8. They’ll spice up your day, get it back on track. There are some more recent covers and mashups of Prado’s mambos, but they just aren’t the same as the originals.

Be careful where you play this stuff; it’ll make your mother or grandmother move in ways you may not want to watch.

“Damn it Jim, what the hell is the matter with you?”* 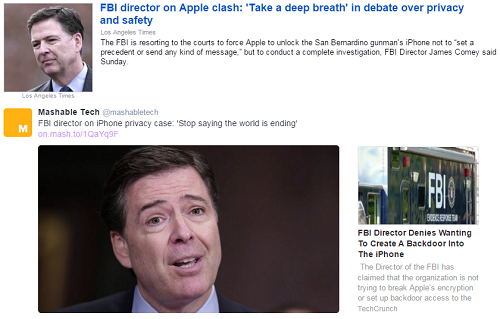 FBI was still trying to dig itself out of a hole on Saturday evening, resorting to damage control mode yesterday. Note, though, Director James Comey’s statement at Lawfare and subsequent coverage at the Los Angeles Times don’t mention at all the screwed up handling of San Bernardino shooter Syed Farook’s iPhone. Take that deep breath, then save it to cool your soup, eh?

So I’m following the map that leads to you
Nope, not Maroon 5, but Facebook’s Connectivity Lab, building a map of the network it claims will help it understand how best to reach populations with poor to no internet. A map, to people not on the map? Creepy, like a stalker ex-boyfriend with global reach. Can’t wait for the conditions by which the U.S. government claims it needs access to that.

Radioactive materials gone walkabout in Iraq now found
This is a strange story. Not the part about a testing device containing radioactive Ir-192 used by a Turkish oil pipeline inspection services company that went missing in November but not reported by media until last week, or the part where the device turned up this weekend, dumped by a gas station. Nor even the odd description of the discovery:

“A passer-by found the radioactive device dumped in Zubair and immediately informed security forces,” the chief of security panel in Basra provincial council, Jabbar al-Saidi, said.
“After initial checking I can confirm the device is intact 100 per cent and there is absolutely no concern of radiation.”

What’s strange is the coverage of this story: picked up by mostly conservative outlets, not widely covered in large news outlets. Huh. Weird. Pick out some key words from the story and do a search yourself, compare to coverage on other stories. Heck, it doesn’t even show up on Reuter’s Middle East and Africa site this morning, though they first broke the story.

Not-so-happy anniversary, Q-1 Predator drone
15 years now this death-from-the-sky has been in use. Sadly, it’s become embedded in our culture now.

All right, time to set this aside and put on my dancing shoes. ¡Vamonos! ¡Baile!