I Con the Record has just released the May 17, 2002 letter John Yoo wrote to Colleen Kollar-Kotelly justifying Stellar Wind. This either lays out for the first time or repeats Yoo’s claim — which I first reported in 2007, based on a Sheldon Whitehouse Senate address, here — that the President doesn’t have to follow EO 12333.

This will be a working thread.

(2) Yoo mentioned the anthrax attack. Did NSA use Stellar Wind to investigate it?

(2) Yoo uses a more moderate justification here — military being deployed to protect buildings — than Goldsmith did in his 2004 memo, where he talked about specific military flights.

(2) As soon as Yoo starts talking about Stellar Wind, he adopts the conditional tense: “Electronic surveillance techniques would be part of this effort.” This of course follows on Yoo admitting Congress modified FISA (though he doesn’t name the statute).

(2) Note in this really squirrelly hypothetical section, Yoo says the surveillance could include email “within” the US, which would be entirely domestic.

(3) Yoo points to absence of a charter as basis for doing whatever NSA wants.

(3) “Congress, however, has not imposed any express statutory restrictions on the NSA’s ability to intercept communications that involve United States citizens or that occur domestically.” (based on the absence of such language in NSA)

(4) I believe the second redaction is designed to enable the wiretapping of people claimed to be tied to the anthrax attack.

(4-5) I find Yoo’s language the more troubling given what precedes it — the rationale.

I’ll come back to this, but note how “domestic” gets defined here. Much of this is still on the books and explains why Muslims get treated differently.

(5, 6) Note Yoo’s explanation for doing this off the books.

That’s not speed, which later became the excuse

(5) “FISA only provides a safe harbor for electronic surveillance, and cannot restrict the President’s ability to engage in warrantless searches that protect the national security.”

(5) Note Yoo refers to the metadata dragnet as “general collection,” which sounds an awful lot like a general warrant.

(7) The redactions on 7 are especially interesting given likelihood they conflict with either what K-K, Bates, or Howard subsequently approved.

(8) The timing of this is remarkable. This letter was written on the same date that Ashcroft changed the rules on the wall, which Lamberth unsuccessfully tried to impose some limits on. Then, on July 22, OLC further expanded the GJ sharing address in FN 8.

(8) Note, again, how Yoo is rewriting Keith and Katz.

(10) again, Yoo seems to be laying the groundwork for back door searches, which makes me wonder whether that’s why this got released?

(12) I don’t believe this border exception appears in Goldsmith. Which suggests there’s something with the way this was applied that is particularly problematic.

(13) This must be the language in question. Goldsmith used another means to justify cross-border collection, while admitting it outright.

(14) This language also disappears from later justifications, suggesting it is part of the problem.

The discussion continues onto the next page. It is of particular interest that K-K got this letter, given that her category distinctions probably addressed these distinctions.

(15) Bingo. This might be a very simple explanation for why they had to go to FISC.

(17) This passage about picking the Defense Secretary rather than AG is pretty much what I noted in my post on the underyling 4A argument, but it has ramifications for the post-2004 program. Also note how closely it piggybacks with the changes to AG guidelines and the

This language explains why they weren’t looking in Stellar Wind for Brady material, and also explains how they do parallel construction (which plays out in the IG Report).

(19) This section lays out the need for the scary memos, without revealing to K-K they exist. 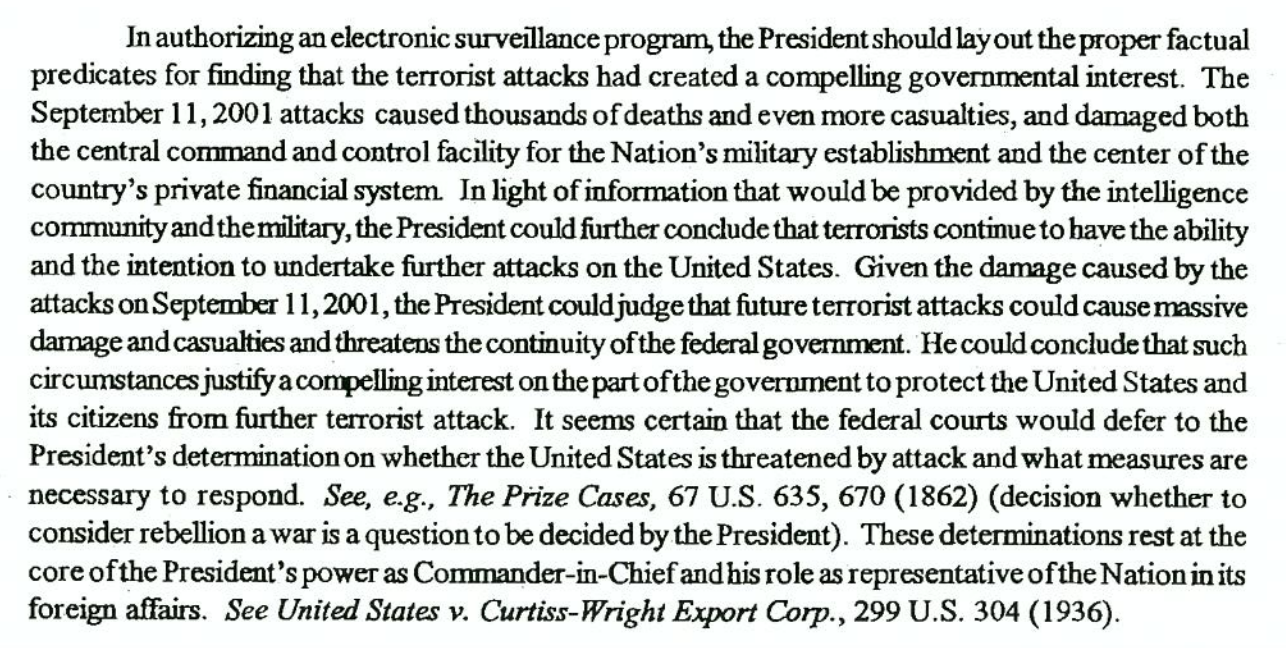 (21) The big redacted section–the biggest redaction in the letter–suggests they’re still hiding the capture and pull up method of this, and therefore the sheer bulk of all this. That’s all the more interesting given that the wall was coming down at that moment. The other redactions in this section, too, seem to track the indexing function. Again, it’s interesting K-K had read (or reviewed) this before the PRTT discussion.