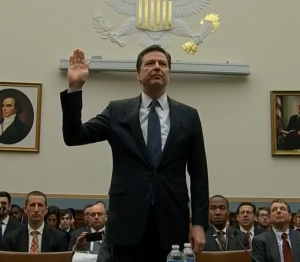 Apple today revealed that the FBI intends to call two witnesses in the March 22 hearing regarding the All Writs Act order to help crack Syed Rizwan Farook’s phone: what I understand to be Privacy Manager Erik Neuenschwander and its Law Enforcement Compliance lawyer Lisa Olle. The tech company declined to say whether it will call the FBI personnel who made sworn statements in the case.

Things could get interesting fast, especially if Apple calls FBI’s forensics guy, Christopher Pluhar — or even better, FBI Director Jim Comey — as there’s an apparent discrepancy between their sworn testimony.

Here’s what Jim Comey had to say in response to a Jerry Nadler question in the March 1 House Judiciary Committee hearing.

As I understand from the experts, there was a mistake made in the, that 24 hours after the attack where the County at the FBI’s request took steps that made it hard later — impossible later to cause the phone to back up again to the iCloud. The experts have told me I’d still be sitting here, I was going to say unfortunately[?], I’m glad I’m here, but we would still be in litigation because — the experts tell me — there’s no way we would have gotten everything off the phone from a backup, I have to take them at their word.

Comey’s comments appear to conflict with this sworn declaration of FBI Christopher Pluhar.

To add further detail, on December 3, 2015, the same day the Subject Device was seized from the Lexus IS300, I supervised my Orange County Regional Computer Forensics Laboratory (“OCRCFL”) team who performed the initial triage of the Subject Device, and observed that the device was powered off, and had to be powered up, or booted, to conduct the triage.

That’s true for several reasons. First, as I understand it, once the phone was turned off, such a backup would no longer be possible, so it would have not been a mistake to change the password. And while Pluhar’s assertion that you can’t get everything from an iCloud backup is consistent with Comey’s claim (presumably Pluhar is one of the experts Comey relied on), Neuenschwander explained that that was false in his own supplemental declaration.

Note, this passage is also the first confirmation that the FBI had already told Apple this phone was part of the investigation by December 6, meaning it must have been one of the ones Apple provided metadata for on December 5.

There is just one way that Pluhar’s declaration and Comey’s statement (again, both were sworn) can be true: if the FBI turned off the phone themselves [update: or let it drain, h/t Some Guy]. That would also mean Comey’s claim that “a mistake was made in that 24 hours after the attack” would make more sense, as it would refer to the decision to turn off the phone, rather than FBI’s direction to San Bernardino County to change the password.

That said, I wonder whether FBI isn’t trying something else by calling Olle and Neuenschwander to testify.

As part of its reply, Apple had Senior Vice President for Software Engineering Craig Federighi submit a declaration to rebut government claims Apple has made special concessions to China. After making some absolute statements — such as that “Apple has also not provided any government with its proprietary iOS source code,” Federighi stated, “It is my understanding that Apple has never worked with any government agency from any country to create a “backdoor” in any of our products or services.”

I was struck at the time that the statement was not as absolute as the others. Federighi relies on what he knows, without, as elsewhere, making absolute assurances.

Which got me wondering. If any country had demanded a back door (or, for that matter, Apple’s source code) would Federighi really need to know? From Neuenschwander’s declaration, it sounded like a smallish team could make the back door the FBI is currently demanding, meaning he might be as high as such knowledge would rise.

So I wonder whether, in an attempt to be dickish, the government intends to ask Neuenschwander and Olle, who would be involved in such compliance issues, if they also back Federighi’s statement.

We shall see. For now, I just bet myself a quarter that Apple will call Comey.

tweets from our circle
Jim White@JimWhiteGNVRT @stephenbottomly: Like Trump, #DeSantis is all about funneling tax dollars to his corporate pals. #CronyCapitalism #FollowtheMoney htt…19 minutes ago29 June 2022
emptywheel@emptywheelAnother column DEMANDING that DOJ indict Trump before lining up the witness testimony. twitter.com/DeanObeidallah…54 minutes ago29 June 2022
emptywheel@emptywheelI love that Area Substacker is adopting the "Beast logistics don't work like that" attack on Hutchinson after it ha… twitter.com/i/web/status/1…56 minutes ago29 June 2022
emptywheel@emptywheelPat Cipollone Predicted the Obstruction and ConFraudUS Prosecutions emptywheel.net/2022/06/29/pat…1 hour ago29 June 2022
Jim White@JimWhiteGNV"Okay, it can't be this word, but I'll try it anyway because it will at least give me information on placing the ye… twitter.com/i/web/status/1…2 hours ago29 June 2022
Jim White@JimWhiteGNVRT @dakine100: For anyone who actually thought Ginni Thomas would voluntarily testify to the J6 committee, I've got a couple of bridges you…12 hours ago29 June 2022
bmaz@bmazRT @modernista64: @bmaz @Karen_Palmer Her isolated vocal track is powerful. youtu.be/njAuEGRthuw13 hours ago29 June 2022
Ed Walker 🍞🌹💉💉@MasaccioEWRT @jordanklepper: The image of a small, feckless man doom scrolling on his phone as the Capitol is stormed, shrugging and pouting as his a…15 hours ago28 June 2022
Ed Walker 🍞🌹💉💉@MasaccioEWRT @AshleySchapitl: A man who tried to grab the steering wheel of the presidential suburban so he could lead a violent mob to the Capitol a…15 hours ago28 June 2022
RayneToday@raynetodayFeels like a tipping point has been reached. twitter.com/Acosta/status/…16 hours ago28 June 2022
RayneToday@raynetodayRT @girlsreallyrule: Michael Stenger, who served as the Sergeant at Arms for the United States Senate during January 6 riot at the US Capit…21 hours ago28 June 2022
RayneToday@raynetodayRT @kyledcheney: JUST IN: The Jan. 6 committee has scheduled a short-notice hearing to share recently obtained evidence. https://t.co/Ijn96…2 days ago27 June 2022
RayneToday@raynetodayWait for it... wait... twitter.com/UrbanAchievr/s…2 days ago27 June 2022
Friday Morning: F for Free and Favorite The Problem of the Liberal Elites Part 3 on Trade
Scroll to top