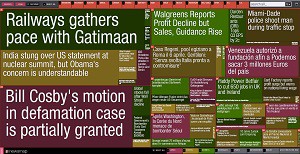 It’s the day belonging to Tiwes, the Norse god of single combat. What will we engage in battle about today? Looks like sketchy news coverage is a good reason, after taking a peek at Newsmap this morning to check global media coverage of the Panama Papers.

Very thin reporting, according to the results. Canada, come on — Bill Cosby is bigger news than global corruption?

Don’t get all peeved off about the U.S. media, which hasn’t done a particularly good job over the last 24 hours. It’s not just us; the lack of coverage may say something about media ownership around the world.

One possible example on shore here: the acquisition of the Las Vegas-Review Journal last year. Nevada happens to be the eighth most popular tax haven in the world, and Las Vegas is its heart. Was this paper acquired in order to influence reporting in and about this topic?

Mossack Fonseca has a subsidiary in Las Vegas, by the way.

Let’s take a look at science and technology news…