On Friday, I described how, for four years after the FISA Court ruled that NSA couldn’t keep otherwise unlawfully collected information from a single traditional FISA order, the NSA continued to do just that with data from 702 orders.

Hogan was [] surprised to learn NSA was doing the same thing — and had been! — with Section 702 data that had otherwise been purged, which the NSA confessed to Hogan in July of last year. That is, having stopped the practice with a single traditional FISA order, they kept doing it with programmatic 702 data.

In light of the May 2011 [redacted], the Court was very surprised to learn from the July 13, 2015 Notice that the NSA had not been deleting from [redacted] Section 702 records placed on the NSA’s Master Purge List (“MPL”).

As the Court explained to the government at the October 8 Hearing, it expects the government to comply with its heightened duty of candor in ex parte proceedings at all times. Candor is fundamental to this Court’s effective operation in considering ex parte submissions from the government, particularly in matters involving large and complex operations such as the implementation of Section 702.

That’s pathetic, given the history of material misstatements to FISC.

All the more so given that it happened after NSA implemented an effort to make sure it started telling FISC the truth (the date is redacted, but it probably happened sometime between October 2011 and March 2013).

As laid out in a 2013 reissue of a 2012 NSA IG report (this report starts at PDF 55; Charlie Savage liberated this via FOIA), NSA implemented a fact-checking process on its own FISC submissions. (See PDF 101) 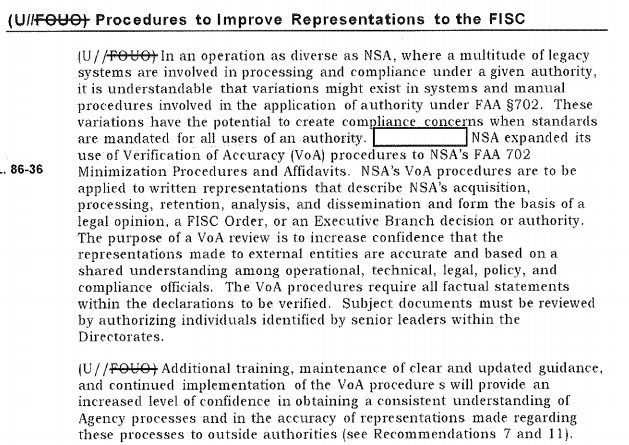 NSA is hiding when they first started fact-checking themselves, but it happened by March 2013. Which means the 2013 and 2014 702 recertification submissions were fact-checked. “The [Verification of Accuracy] procedures require all factual statements within the declarations to be verified.” Yet neither told FISC that NSA continued to retain communications from selectors on the Master Purge List in a management database two and three years after the time (at that point) FISC had told NSA, in an order titled, “Opinion and Order Requiring Destruction of Information Obtained by Unauthorized Electronic Surveillance,” it could not do so, not even with data unlawfully obtained on a single targeted FISA order. It took another year before NSA confessed to FISC it was keeping 702 data that should have been purged.

Perhaps the continued discovery of three to four violations every time NSA submits its recertification process reflects the slow implementation of fact-checking. Or perhaps there are just too many databases in which willing NSA employees can stash information before it gets purged off all the other databases.

But if the VoA was supposed to “increase confidence” in what NSA says to courts and Congress, it’s not clear how continuing to miss things like ongoing retention of unlawfully collected information does that.

FBI’s Back Door Searches: Explicit Permission … and Before That
Last July, NSA and CIA Decided They Didn’t Have to Follow Minimization Procedures, and Judge Hogan Is Cool with That

Please consider a donation to support this work.