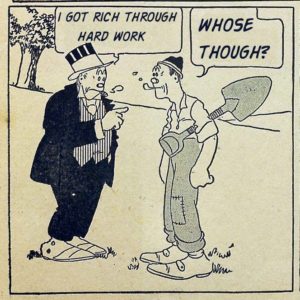 By principles, Veblen means the overarching habits of mind that enable one to participate effectively in a society or a subset of society. Before the machine age, the age of the industrial process, people thought about themselves and the world around them in terms of “…the principles of (primitive) blood relationship, clan solidarity, paternal descent, Levitical cleanness, divine guidance, allegiance, nationality”. Veblen thinks these principles are in decline as of 1904, replaced by habits of mind of thinking in terms of cause and effect, a scientific habit of mind, because that is what a machine culture needs. These habits relate to the pecuniary nature of the machine age. And the basis for the pecuniary culture is the ownership of property, which is the only one of the primitive standards to survive into the machine age. It not only survives, it becomes the dominant principle of the machine age. Every transaction, it seems, is settled with a payment of money.

Veblen says that the theory of property as used in the machine age comes from John Locke. Before Locke, the general theory was that the Deity gave dominion over the earth to humans, and specifically the King, who in the name of the Deity gave control over land and the things in it to those he desired, who in turn gave it to others. Locke offers a different view, which Veblen describes this way; the quotes are from Locke’s Second Treatise on Government.:

This modern European, common-sense theory says that ownership is a “Natural Right.” What a man has made, whatsoever “he hath mixed his labor with,” that he has thereby made his property. It is his to do with it as he will. He has extended to the object of his labor that discretionary control which in the nature of things he of right exercises over the motions of his own person. It is his in the nature of things by virtue of his having made it. “Thus labor, in the beginning, gave a right of property.” The personal force, the functional efficiency of the workman shaping material facts to human use, is in this doctrine accepted as the definitive, axiomatic ground of ownership; behind this the argument does not penetrate, except it be to trace the workman’s creative efficiency back to its ulterior source in the creative efficiency of the Deity, the “Great Artificer.”

I had never read any of Locke’s works, so I took a look at the Second Treatise. Here’s the original, and here’s a translated version that is somewhat easier to grasp. As I read Chapter 5, Veblen seems to be accurate. There is a lot of scholarly material attempting to understand and apply Locke’s ideas; here’s an example. For those interested in a polemical current view of Locke (and who isn’t?), here’s a fascinating essay by John Quiggan in Jacobin, Locke Against Freedom. Quiggan says that David Hume offered a rejoinder to this view:

As Hume objected, “there is no property in durable objects, such as lands or houses, when carefully examined in passing from hand to hand, but must, in some period, have been founded on fraud and injustice.”

It became a principle of the natural order of things that free labor is the original source of wealth and the basis of ownership. In point of historical fact, no doubt, such was not the pedigree of modern industry or modern ownership; but the serene, undoubting assumption of Locke and his generation only stands out the more strongly and unequivocally for this its discrepancy with fact.

He thinks that Locke’s general idea came from a time when most useful work was done by small artisans like cobblers and blacksmiths, and farmers. He traces it on to the needs of merchants, and into his time. Veblen saw that while that this idea might work in earlier times, it’s application was not suited to the machine age. Still it was the dominant theory.

Veblen describes two other business principles. The first is the stability of money values, which at the time stood on the stability of the price of gold and to a much lesser extent, of silver. It was an assumption of businessmen, but not of economists, says Veblen. The second is a regular rate of profit. This enabled businessmen to capitalize their plant and equipment and their industrial processes, so that value turned on the capitalization rather than output, livelihood of the owner, or serviceability of products.

Veblen’s discussion of Locke is strikingly contemporary. Locke’s theory of ownership by reason of work done certainly doesn’t seem like a useful principle to me. Suppose a person sets up a factory, buys raw materials and machines, and hires some people to work for him. Who exactly is mixing labor with goods so as to “own” the resulting product? Or, consider a scientist working in a lab on identifying anti-virals for the Zika virus. The project will require the current work of thousands of people, and past work of uncounted numbers. Who exactly do we identify as the owner of the finished protocols and the final results? Whatever it is, it has little to do with the work done by those uncounted people. Ownership is divorced completely from substantially all of the workers who created the new solutions.

On the other hand, those old ideas that Veblen dismissed so casually never died. I don’t think many ideas ever die, but the ties of kinship, nation, and the Church are especially hardy. Even the idea of Levitical cleanness remains, as we can see in the unending efforts to control the lives and health of women, not just here, but around the world. There are even theoretical frameworks in which such principles have an important place, such as Moral Foundations Theory, discussed here:

In the US the rise of the anti-Enlightenment right wing and its sponsors forces us to question whether the scientific mind continues to be a form of self-governance and of shared cultural values. And, of course, Natural Law lives on in the jurisprudence of Clarence Thomas, at least according to an astonishing article in the Regent University Law Review which I couldn’t make myself read because the sections I did read were appalling, google it if you have to know.

Locke’s ideas generally are associated with the Founding Fathers. No doubt his positions on slavery and expropriating the lands of Native Americans, and his idea that ownership of private property free of governmental interference is a crucial element of freedom, were congenial to their personal desires and philosophical positions. We may need to think about property more closely, as we have done with the other two.