When Does a Random Taxi Driver Become a Lawful Combatant? 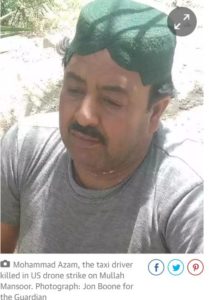 Mohammad Azam, in a photo at the linked Guardian article.

A couple of weeks ago, I wrote a post questioning the Obama Administration’s logic in killing the leader of the Afghan Taliban in a drone strike in Pakistan. It turns out that the Defense Department also employed some very suspect reasoning surrounding the drone strike.

On June 1 (apologies for the delay, but as most of you know, our site was hacked and has migrated to a new host) Brigadier General Charles H. Cleveland, who heads the US effort in Afghanistan, took part in a press conference in which he was patched into Washington via a video link from Kabul. At the end of the transcript, we have a very telling exchange:

Q: General, Lucas Tomlinson, from Fox News. Just a quick follow-up to Louis’ question. Were you or General Nicholson concerned that Mullah Mansur was in Iran? And are you concerned about Iran sheltering Taliban officials? Thank you.

You know, our — our real focus on it, again, continue to be Afghanistan and I know it sounds like I’m dodging your question and I don’t mean to, but again, you know, the location of Mullah Mansur and where he was either before or during the strike, et cetera, are really questions that probably the team back in Washington, D.C., has got a better answer for you.

Our real role, again, as I think you’re well aware — Mullah Mansur was a threat to U.S. forces, he was an obstacle to peace. An opportunity presented, the president made a decision and he was targeted and he was killed. And so really, the rest of the aspect of that really is better to answer — better answered back in Washington, D.C.

Q: And lastly, was the taxi cab driver — was he part of the Taliban, too? Did he — did he have that same threat to U.S. forces?

General Cleveland’s response to Tomlinson here would have us think that Mohammad Azam, the taxi driver who was killed along with Mansour, was a member of the Taliban who posed a direct threat to the US. That would seem to make him an appropriate target for killing.

It seems that a suitable reference on which to rely for DoD’s thinking on combatants is to go back to William Haynes’ memo dated December 12, 2002 and titled “Lawful Combatants”. This memo comes from Haynes as General Counsel to DoD and is addressed to a Roundtable assembled by the Council on Foreign Relations. It appears that this exercise was geared toward providing legal cover for the Bush Administration’s “new” reading of international law and especially its attempts to shield prisoners from the Geneva Conventions.

In the memo, Haynes says this with regard to combatants:

An “enemy combatant” is an individual who, under the laws and customs of war, may be detained for the duration of an armed conflict. In the current conflict with al Qaida and the Taliban, the term includes a member, agent, or associate of al Qaida or the Taliban. In applying this definition, the United States government has acted consistently with the observation of the Supreme Court of the United States in Ex parte Quirin, 317 U.S. 1, 37-38 (1942): “Citizens who associate themselves with the military arm of the enemy government, and with its aid, guidance and direction enter this country bent on hostile acts are enemy belligerents within the meaning of the Hague Convention and the law of war.”

The President has determined that al Qaida members are unlawful combatants because (among other reasons) they are members of a non-state actor terrorist group that does not receive the protections of the Third Geneva Convention. He additionally determined that the Taliban detainees are unlawful combatants because they do not satisfy the criteria for POW status set out in Article 4 of the Third Geneva Convention. Although the President’s determination on this issue is final, courts have concurred with his determination.

So according to the 2002 DoD interpretation of a “determination” by President George W. Bush, members of the Taliban are enemy combatants. But they also are unlawful combatants instead of lawful combatants, so that is one bit of misleading information from Cleveland.

A much bigger problem, though, is that from all appearances, Mohammad Azam was not a driver affiliated with the Taliban and certainly not Mansour’s personal driver. The Guardian looked carefully into the circumstances of how Azam came to be driving Mansour and it appears that Azam was randomly assigned to drive Mansour:

It was a series of chance occurrences that led to Azam finding one of the US’s most wanted men sitting in his white Toyota Corolla.

Azam got much of his work though a small local transport company owned by Habib Saoli, which has its office near the exit of the Iranian-Pakistani border facility that straddles the border.

Mansoor emerged from that building shortly after 9am on 21 May, returning to Pakistan after a long visit to Iran which, it has been reported, was for both medical attention and to visit members of his family.

He immediately began looking for a ride for the 600km journey to the city of Quetta.

Said Ahmed Jan, an employee of a bus company, was trying to fill up the final seats of his Quetta-bound minibus but Mansoor wasn’t interested.

“He said, ‘I want to go in a car’, so I called Habib and asked him to provide a car,” said Jan. “Habib took a little commission and gave the job to Azam.”

It’s very hard to see how a taxi driver randomly assigned to transport a legitimate target of the Defense Department suddenly becomes transformed into a lawful combatant himself. Despite Cleveland’s assurance to the contrary, I seriously doubt that DoD considered Azam a lawful combatant at the time they authorized the strike. The most logical assumption is that DoD came to the decision that Azam’s life was acceptable collateral damage for taking out Mansour. Cleveland simply lacked the honesty to deliver that sad truth.

There also may be legal reason for this lie, however, since Azam’s family has started the paperwork within Pakistan to sue the US over his death. It will be interesting to see whether the case proceeds, especially in light of the previous ruling in the Peshawar High Court that US drone strikes in Pakistan are war crimes.

Postscript: I suppose that one might argue that Cleveland was referring to Mansour rather than Azam when he was making his assurance that “he was a lawful combatant”, but then that says Cleveland completely ignored the question about the status of Azam.