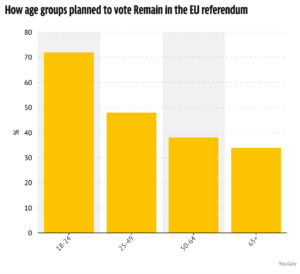 As you surely know, Britain voted to Brexit the European Union yesterday, confounding predictions and setting off a great deal of uncertainty.

One detail people are focusing most closely on is the age differential shown in a YouGov exit poll. It showed that voters 18-24 voted overwhelmingly to stay in the EU. “The younger generation has lost the right to live and work in 27 other countries,” a widely linked FT comment laid out. “We will never know the full extent of the lost opportunities, friendships, marriages and experiences we will be denied.”

That Millennial sentiment, and the overwhelming support for Remain, has been celebrated as wise by the punditocracy — and it probably is.

But the same people celebrating this Millennial view — one that embraced tolerance and opportunity — often as not attacked the overwhelming support by American Millennials for Bernie Sanders. That disproportionate support, coming from a much smaller part of the electorate but by very similar margins, was deemed a naive belief in empty promises (promises, of course, that largely resembled adopting the policies that the EU used to and in some places still represents).

I suspect the reality is that, on top of a real cosmopolitanism among younger people, both votes were just a vote for perceived self-interest, no more or less wise than the votes of their older, less cosmopolitan parents.

Still, those celebrating the UK’s Millennials for their wisdom might give some consideration as to why the underlying cosmopolitanism and interest in European style social policies of the young would be the perceived self-interest of the young on both sides of the pond.