The pages are actually more damning than I expected. It lays out many damning details we already knew of: including that Bandar bin Sultan’s wife was providing money to one of the suspect Saudi intelligence people, several Saudi apparent agents provided support for the hijackers, and an apparent dry run for the attack was conducted by someone paid by the Saudis.

One really damning detail that I didn’t know, however (or had forgotten if covered in Bob Graham’s book), is that it wasn’t until the Joint Inquiry focused on the Saudis that FBI established task force to look into Saudi Arabia’s role in the attack.

That means over a year elapsed before the FBI really started investigating this angle. It goes on to reveal FBI was not focusing any counterintelligence resources on Saudis before 9/11, because “FBI received ‘no reporting from any member of the Intelligence Community’ that there was a [redacted] presence in the United States.” A very heavily redacted passage implies that’s because they were an “ally” [scare quotes original].

It goes on to note that CIA did have records of such ties (we knew that); it makes no mention of NSA, though they knew of Saudi ties as well.

The report even reveals that Robert Mueller learned about the Saudi role in the attack from the Joint Inquiry: 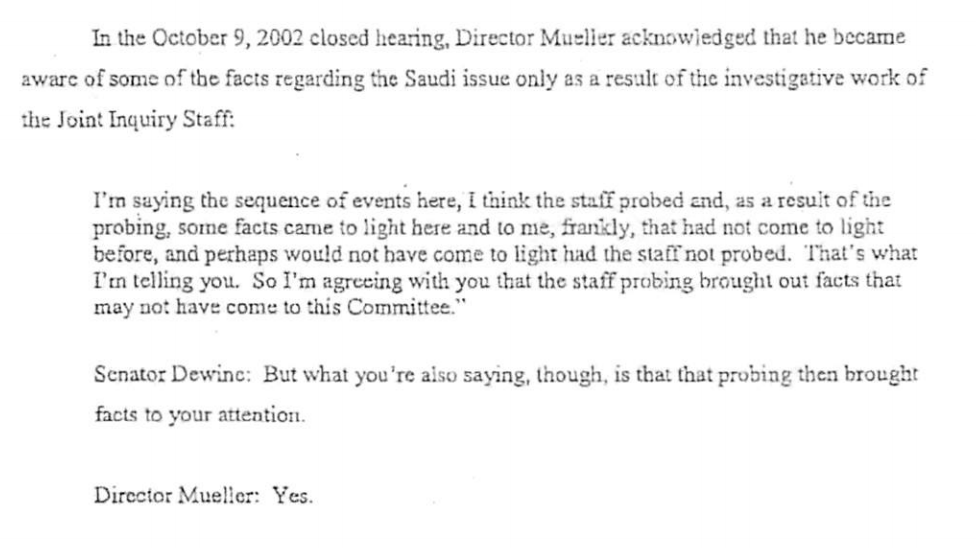 This is fairly unbelievable, but all too believable.

The end of the report provides multiple reports of Saudi refusal to cooperate in the investigation.

I’m particularly interested in the detail that they demanded information that would show sources and methods. I know that the Saudis had notice of Stellar Wind well before it got exposed in 2005. That means they were getting tips on what we knew even as refusing to tell what they knew.

Between that and the failure to investigate, it explains how the Saudis could get away with assisting an attack on the US.

Update: Kristin Breitweiser rightly rails on mainstream coverage of the report that dismiss the seriousness of the allegations in the report.

When CIA Director John Brennan states that he believes the 29 pages prove that the government of Saudi Arabia had no involvement in the 9/11 attacks, recognize that John Brennan is not a man living in reality — he is delusional by design, feeding and protecting his Saudi vice.

When Assistant Secretary of State for Near Eastern Affairs, Anne W. Patterson, testifies — under oath — that the Kingdom of Saudi Arabia is an ally that does everything they can to help us fight against Islamic terrorism, recognize that her deep, steep Saudi pandering serves and protects only her Saudi vice.

Read the 29 pages and know the facts.

Do not let any person in our government deny the damning reality of the 29 pages.