I want to make a really minor point about one of the documents produced to ACLU with the Drone Rule Book — which the White House calls a Presidential Policy Guidance — last week (here’s my working thread on the Rule Book). The Rule Book itself has a section that “requires” Congressional notification (but may be more important for the requirement that the White House must learn about information sharing before it happens, which might end up in less notification). 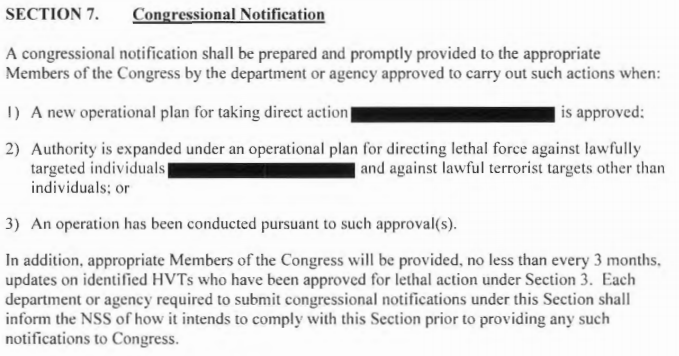 As part of its implementation of the Rule Book, DOD released a Report on Congressional Notification of Sensitive Military Operations and Counterterrorism Operational Briefings (DOD released several related documents; CIA released nothing). Throughout the short document, it says the 2014 Defense Authorization (which was introduced after the Rule Book was signed but before DOD issued its Drone Rule Book implementation procedures and signed into law on December 23, 2013) and the PPG require Congress be informed of sensitive military operations. That’s the Executive Branch’s way of saying, “Congress has required we tell it what we’re doing but so has the President” as if they came up with the idea to do that additional reporting in the first place.

Those bullets don’t come from the Rule Book (its notice requirement is far less detailed than that). Rather, they come from this section of the Defense Authorization. 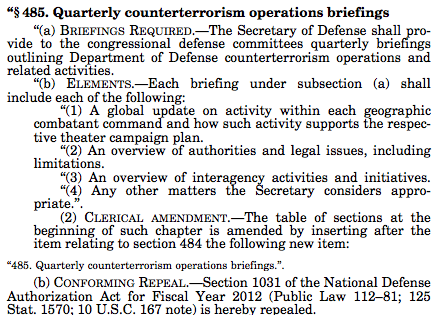 As you can see, that section mandates answers to bullets 1 through 4 (the unredacted ones), and then includes a conforming amendment that repeals this section from 2013’s Defense Authorization.

The only difference in the unclassified portion of the 2014 Defense Authorization that replaced the 2013’s version is the deletion of the phrase “involving special operations forces.”

Of course, we can tell from the Report there’s a fifth, Top Secret bullet. It may well be that’s why they eliminated the prior year’s requirement and added a new almost identical one: to provide an opportunity to put that fifth bullet into the Defense Authorization’s classified appendix. That’s a wildarse guess, of course, but also a logical explanation for that fifth bullet: at a time when the White House was releasing fluffy documents pretending to be more open and orderly, Congress was secretly mandating additional reporting they weren’t getting.

There are a number of things that might be in that fifth bullet. Perhaps the least controversial of those would be a requirement that DOD tell Congress — actually just a tiny handful of members — which countries the US engages in lethal force in, and which groups we partner with to do it (this would be consistent with a number of items that are redacted in the Rule Book itself). You could imagine why, in 2013 and 2014, members of Congress might want to be told if the US was partnering with al Qaeda affiliates on lethal operations anywhere in the world, seeing as how we are ostensibly at war with al Qaeda.

As a reminder, Senate Intelligence Committee member Ron Wyden spent part of 2012 and 2013 unsuccessfully trying to get a list of all the places the government was engaging in lethal operations.

As I said, this is a fairly minor point. But it also suggests that even while the Executive was leaking wildly to get good press about this Drone Rule book, Congress was at the same time mandating specifically some of the things the Rule Book only nodded to in theory.

tweets from our circle
emptywheel@emptywheelRT @SeamusHughes: A short thread on Buffalo, the shooter and what we can learn. 🧵3 hours ago16 May 2022
bmaz@bmazNever heard of Boban before, but the beatdown of the Suns at the Arena was the most disappointing Suns loss in my l… twitter.com/i/web/status/1…5 hours ago16 May 2022
bmaz@bmazLol. Chris Paul has 3 (THREE) points. twitter.com/dpottzzz/statu…8 hours ago16 May 2022
bmaz@bmazFair: twitter.com/Pat_Benson_Jr/…8 hours ago16 May 2022
emptywheel@emptywheelReup, since Kash Patel is making shit up again. Scene-Setter for the Sussmann Trial, Part One: The Elements of th… twitter.com/i/web/status/1…12 hours ago15 May 2022
Ed Walker 🍞🌹💉💉@MasaccioEWWaiting for that little freak's parents and friends telling us he's just a confused kid. Journos: we need clicks. Normal people: GFY.18 hours ago15 May 2022
Ed Walker 🍞🌹💉💉@MasaccioEWLest we forget, Dylann Roof showed the way for this murderer. bit.ly/37MkXeR twitter.com/Phil_Lewis_/st…18 hours ago15 May 2022
Jim White@JimWhiteGNVGoodbye Cyprus, hello Germany. Strange changes happened mid-route on the train, and we wound up on the wrong side o… twitter.com/i/web/status/1…20 hours ago15 May 2022
Jim White@JimWhiteGNVVery pleasant final breakfast in Cyprus. Strolling saxophone. And then the champaign came out… pic.twitter.com/yLIVs02GHL2 days ago14 May 2022
RayneToday@raynetodayLet's not ignore the plea for others to be "awake & watching!" is the entitled cis-het white dude version of "stay… twitter.com/i/web/status/1…3 days ago13 May 2022
RayneToday@raynetodayRT @marceelias: I am concerned about what might be behind this.👀 clickorlando.com/news/local/202…3 days ago13 May 2022
RayneToday@raynetodayRT @EmmyA2: I’m a lot less interested in the infuriating, but inevitable, outcome of this vote than I am in how much hell Democrats are goi…4 days ago11 May 2022
RayneToday@raynetodayRT @DougJBalloon: Whether it’s the right painting Swastikas in blood on synagogues, or the left writing pro-choice slogans in chalk on Susa…5 days ago11 May 2022
Drone Rule Book, Working Thread Just Another Misogynist Monday
Scroll to top