Covers are often treated like poor relations in hand-me-downs. It’s not the performer’s own work, how can they possibly do the original justice?

Yeah…and then this. I think it’s an example of an exceptional cover. It’s one of my favorites. There are a number of other fine covers of this same piece — some are sweet, some have better production values, and some are very close to Radiohead’s original recording. But this one has something extra. Carrie Manolakos, a Broadway performer known for her role as Elphaba in Wicked, takes a breath at 2:19 and watch out. Her second album will release next month if you enjoy her work.

In Sickness and Health
Here, read these two stories and compare them:

Leaving you with the actual heds on these articles. How isn’t this simple extortion? You know, like, “Nice national health care system you’ve got there. It’d be a shame if anything happened to it.”

Cry me a river about corporate losses. Last I checked Aetna’s been paying out dividends regularly, which means they still have beaucoup cash.

If only we’d had a debate about offering single payer health care for everyone back in 2009 so we could say Fuck You to these vampiric corporate blackmailers.

Still in Shadow
A timeline of articles, analysis, commentary on the hacking of NSA malware staging servers by Shadow Brokers — no window dressing, just links:

You know what this reminds me of? Sony Pictures’ email hacking. Back and forth with Russia-did-it-maybe-not-probably, not unlike the blame game pointing to North Korea in Sony’s case. And the linguistic analysis then suggesting something doesn’t quite fit. 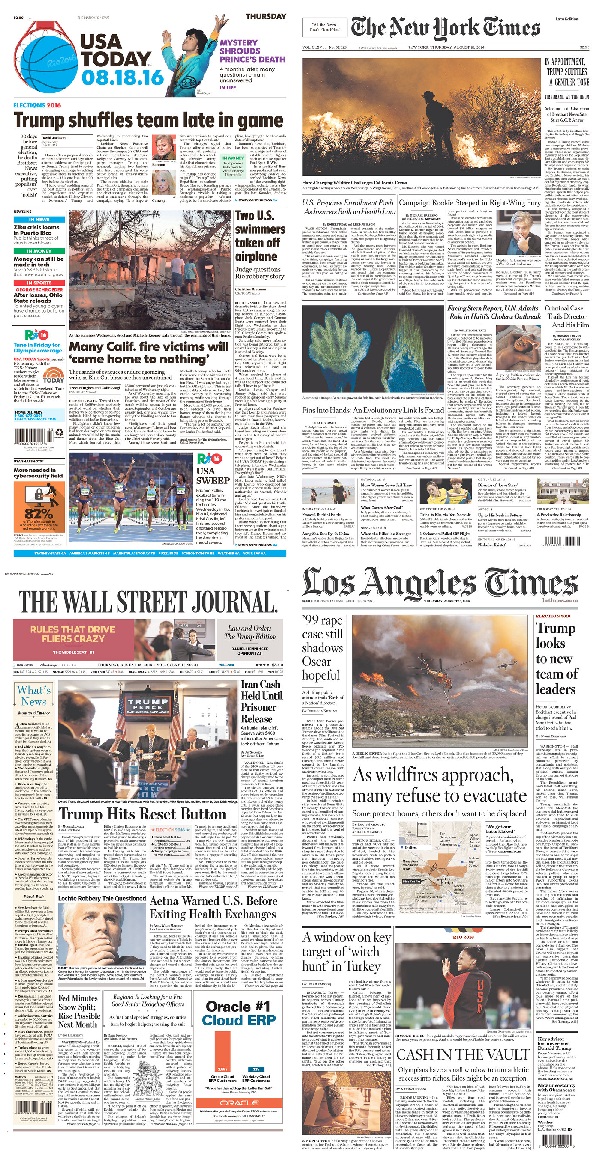 American Refugees
I read in one of my timelines today a complaint by a journalist about Louisiana flooding news coverage. Wish I’d captured the thread at the time; they were put out that the public was unhappy about the media’s reporting — or lack thereof. They noted all the links to articles, videos, photos being shared in social media, noting this content came from journalists.

Except there really is a problem. The embedded image here is the front page of each of the four largest newspapers in the U.S. based on circulation, total combined circulation roughly six million readers. NONE OF THEM have a story on the front page about the flooding in Louisiana, though three of them covered the California Blue Cut Fire. Naturally, one would expect the Los Angeles Times to cover a fire in their own backyard, and they do have a nice photo-dense piece online. But nothing on the front page about flooding.

The Livingston Parish, Louisiana sheriff noted more than 100,000 parish residents had lost everything in the flood. There are only 137,000 total residents in that parish.

Between the +80,000 Blue Cut Fire evacuees and more than 100,000 left temporarily homeless in Louisiana, the U.S. now has more than a couple hundred thousand climate change refugees for which we are utterly unprepared. The weather forecast this week is not good for the Gulf Coast as unusually warm Gulf water continues to pump moisture into the atmosphere. We are so not ready.

Longread: The last really big American flood
Seven Scribes’ Vann R. Newkirk II looks at the last time a long bout of flooding inundated low-lying areas in the south, setting in motion the Great Migration. This is the history lesson we’ve forgotten. We need to prepare for even worse because like the Blue Cut Fire in California and Hurricane Sandy in New Jersey and New York, disaster won’t be confined to a place too easily written off the front page.