Since it was first proposed, I’ve been warning (not once but twice!) about the FISCR Fast Track, a part of the USA Freedom Act that would permit the government to immediately ask the FISA Court of Review to review a FISC decision. The idea was sold as a way to get a more senior court to review dodgy FISC decisions. But as I noted, it was also an easy way for the government to use the secretive FISC system to get a circuit level decision that might preempt traditional court decisions they didn’t like (I feared they might use FISCR to invalidate the Second Circuit decision finding the phone dragnet to be unlawful, for example).

Sure enough, that’s how it got used in its first incarnation — not just to confirm that the FISC can operate by different rules than criminal courts, but also to put down a judges rebellion.

As I noted back in 2014, the FISC has long permitted the government to collect Post Cut Through Dialed Digits using FISA pen registers, though it requires the government to minimize anything counted as content after collection. PCTDD are the numbers you dial after connecting a phone call — perhaps to get a particular extension, enter a password, or transfer money. The FBI is not supposed to do this at the criminal level, but can do so under FISA provided it doesn’t use the “content” (like the banking numbers) afterwards. FISC reviewed that issue in 2006 and 2009 (after magistrates in the criminal context deemed PCTDD to be content that was impermissible).

The government didn’t deal with it for three months until just as they were submitting their next application. At that point, there was not enough time to brief the issue at the FISC level, which gave then presiding judge Thomas Hogan the opportunity to approve the PRTT renewal and kick the PCTDD issue to the FISCR, with an amicus.

This minimized the adversarial input, but put the question where it could carry the weight of a circuit court.

Importantly, when Hogan kicked the issue upstairs, he did not specify that this legal issue applies only to phone PRTTs.

At the FISCR, Mark Zwillinger got appointed as an amicus. He saw the same problem as I did. While the treatment of phone PCTDD is bad but, if properly minimized, not horrible, it becomes horrible once you extend it to the Internet. 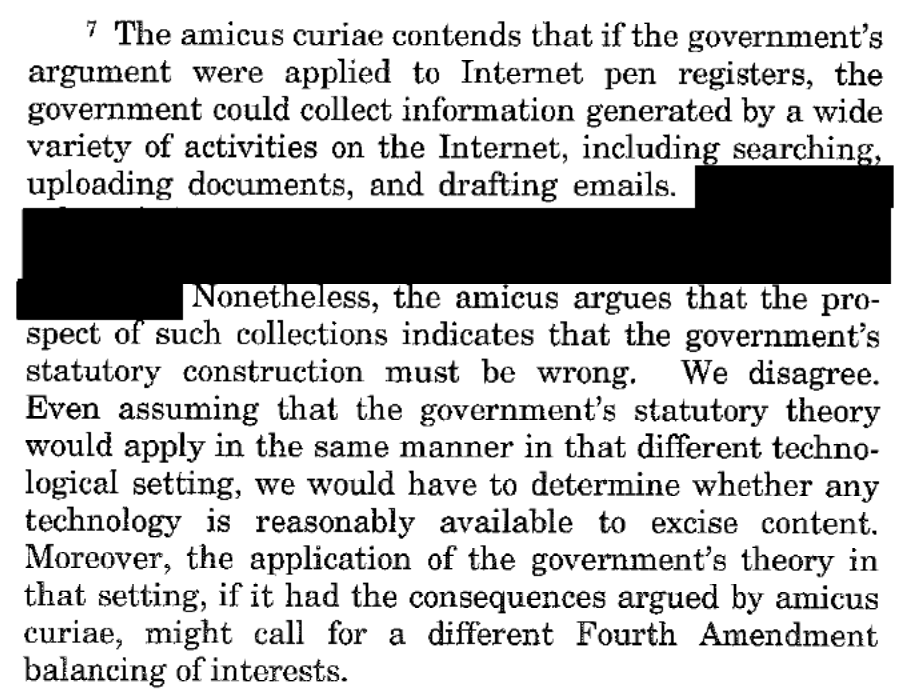 The FISCR didn’t much care. They found the collection of content using a PRTT, then promising not to use it except to protect national security (and a few other exceptions to the rule that the government has to ask FISC permission to use this stuff) was cool. 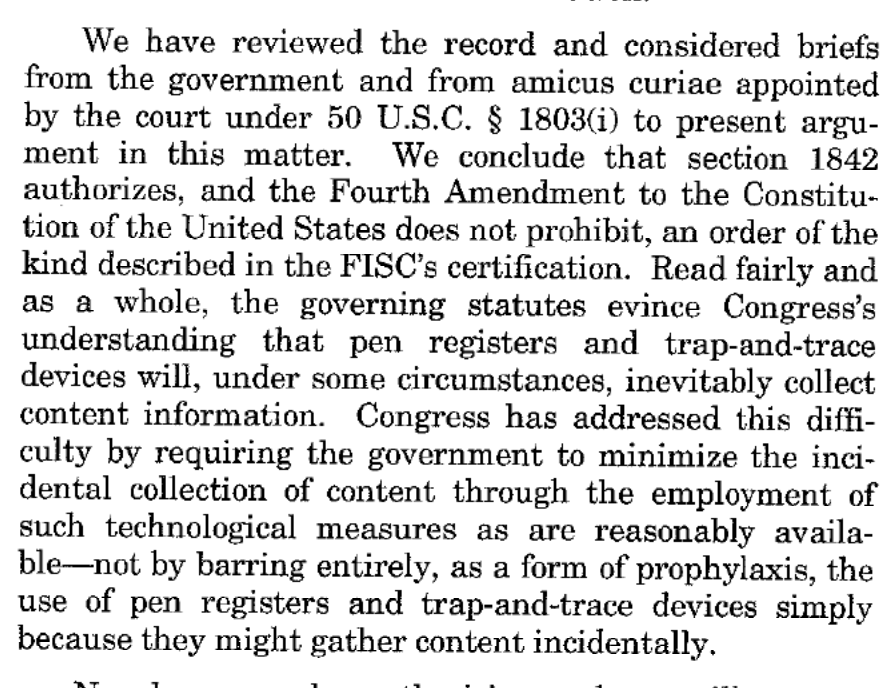 Along the way, the FISCR laid out several other precedents that will have really dangerous implications. One is that content to a provider may not be content. 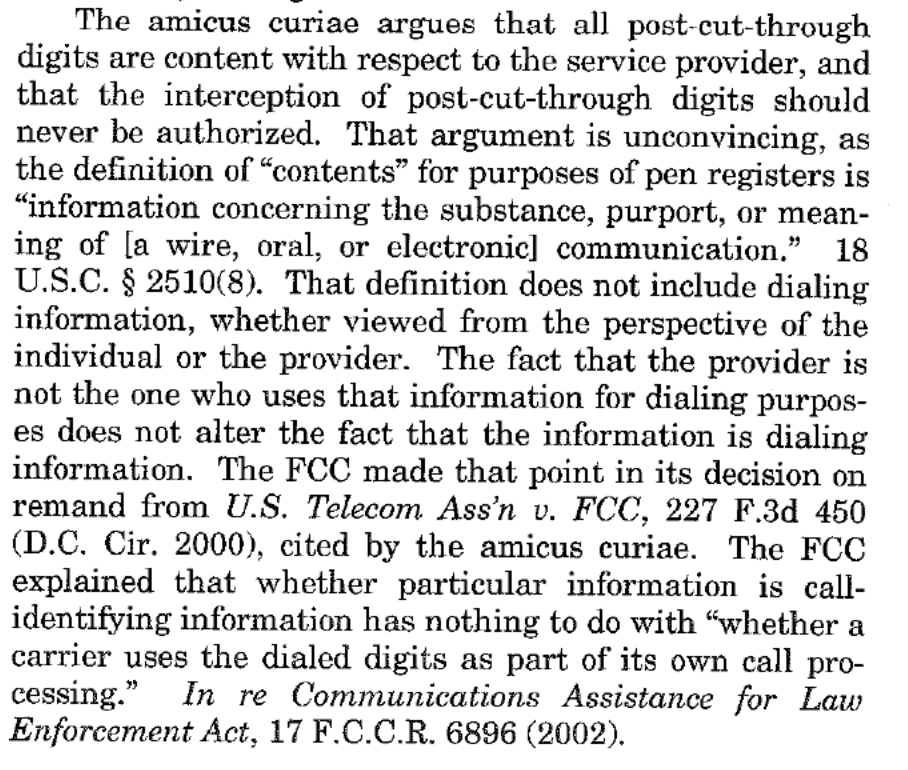 This is probably the issue that made the bulk PRTT dragnet illegal in the first place (and created problems when the government resumed it in 2010). Now, the problem of collecting content in packets is eliminated!

Along with this, the FISCR extended the definition of “incidental” to apply to a higher standard of evidence. 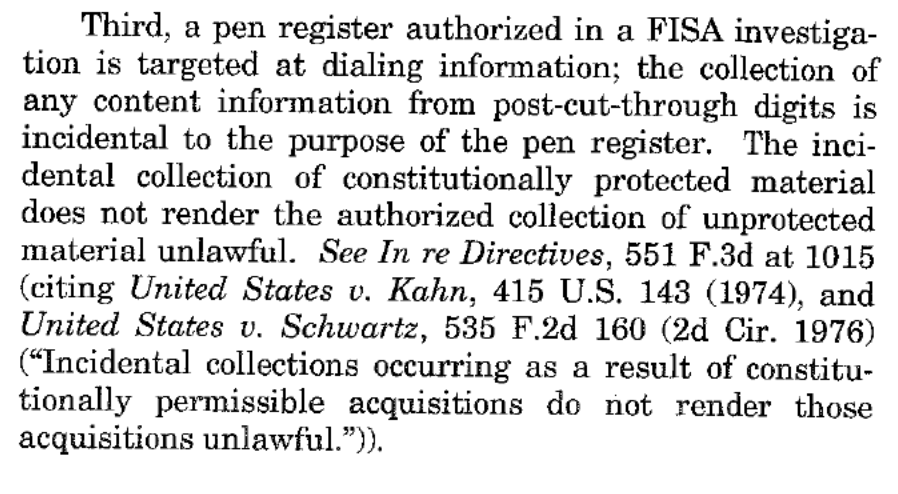 Thus, it becomes permissible to collect using a standard that doesn’t require probable cause something that does, so long as it is “minimized,” which doesn’t always mean it isn’t used.

Finally, FISCR certified the redefinition of “minimization” that FISC has long adopted (and which is crucial in some other programs). Collecting content, but then not using it (except for exceptions that are far too broad), is all good.

In other words, FISCR not only approved the narrow application of using calling card data but not bank data and passwords (except to protect national security). But they also approved a bunch of other things that the government is going to turn around and use to resume certain programs that were long ago found problematic.

I don’t even hate to say this anymore. I told privacy people this (including someone involved in this issue personally). I was told I was being unduly worried. This is, frankly, even worse than I expected (and of course it has been released publicly so the FBI can start chipping away at criminal protections too).

Yet another time my concerns have been not only borne out, but proven to be insufficiently cynical.