America, Friday Night Lights and Ditka Is An Ass Trash 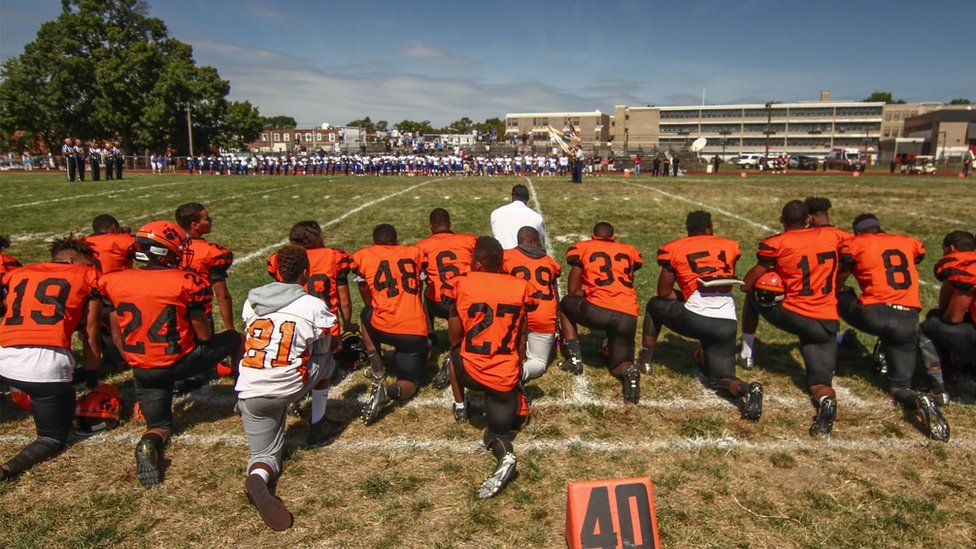 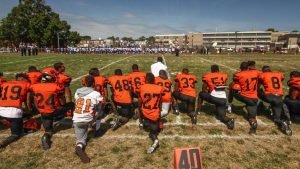 Colin Kaepernick started something when he sat, and then kneeled, for the Star Spangled Banner. Not sure he knew or fully intended the scope of reaction he generated, but generate it he did. It has led to much consternation and discussion across sports, media and the nation’s conscience. Not yet to the significance of the #BlackLivesMatter effort, but remarkably substantial.

“I am not going to stand up to show pride in a flag for a country that oppresses black people and people of color,” 49ers quarterback Colin Kaepernick said of his decision to kneel during a pregame performance of the national anthem.

The action, which Kaepernick said was intended to draw attention to the way law enforcement, and American society in general, treats minorities, has since been adopted by other athletes, professional and otherwise, around the country.

Critics, like Donald Trump and Ted Cruz, have upbraided Kaepernick and others for an action that they say is disrespectful and unpatriotic. Kaepernick recently shot back, saying “there’s a lot of racism in this country disguised as patriotism.”

I always had some doubts about Kaepernick as an upper tier QB in the NFL, but nobody who has listened to him talk about his basis for doing what he has, and read about his backstory, can doubt his sincerity and motivation in what he is doing as to seeking social commentary, action and remediation.

Oh, and before you get too wrapped up in your flag, patriotism and the holier than thou national anthem, take a gander at the third verse Francis Scott Key wrote, and that is now oh so conveniently omitted from the hallowed singing of it:

And where is that band who so vauntingly swore
That the havoc of war and the battle’s confusion,
A home and a country, should leave us no more?
Their blood has washed out their foul footsteps’ pollution.
No refuge could save the hireling and slave
From the terror of flight, or the gloom of the grave:
And the star-spangled banner in triumph doth wave,
O’er the land of the free and the home of the brave.

Yeah. Our precious national anthem, from the conveniently omitted third verse, to other descriptions of only “free men”, was really a racist ode to slavery and oppression. Go figure. How dare Colin Kaepernick, or any other citizen possibly object??

Now there is a distinction, often poorly understood, between free speech, and free speech that is protected by the Constitution. The former is what we pretend to ascribe to, the latter is that which the Constitution, mostly, protects from from impingement from government law and/or censorship. There is a difference. And, no, please, do not even think about netsplaining to me that there are limits because “fire in the theater”, lest I have to reach through the inner tubes and strangle the last ounce of life out of you.

Even the craven cop unions which have predictably displayed their belligerence and ignorance over national anthem protests are likely not government actors per se impinging on Kaepernick and others free speech. Unamerican jerks who have no clue what the founding principles (including life other than those in blue) stand for, sure, but that is it.

Before this morning, I might have ended there with a few more words about the dubious antics of jacked up militarized police unions. But then Hall of Fame coach and player Mike Ditka went off in full ignorant racist bigot mode:

Anybody who disrespects this country and the flag, if they don’t like our flag then get the hell out,” he said on Dallas’ 105.3 The Fan. “That’s what I think. So if you’re asking me, I have no respect for Colin Kaepernick.

Yikes. That is not the lovable, if cantankerous, “Da Bears” guy Ditka has made a living existing on. Not to be impolitic or anything, but Mike Ditka can go fuck himself. And, since we are all entitled to our opinion without having to leave the country of our birth and residence, there will be no call here for him to go elsewhere. But I’d sure rather have a thoughtful human like Colin Kaepernick, concerned about racism and fundamental rights, than a blowhard fat jackass like Mike Ditka if it came down to a choice for a neighbor.

And then I saw the story of Coach Preston Brown and the Woodrow Wilson Tigers of Camden, New Jersey. The Tigers don’t play on Sunday like the oh so important NFL, nor even on Saturday with the NCAA elite. They play on Friday nights (okay, sometimes Saturdays), and make it through the week to get there through grit, determination, character and the love of their coaches, led by Preston Brown.

As the head coach of the Woodrow Wilson High School Tigers, he took on the 24-hour-a-day job of being a mentor and a father figure to 68 young men and boys who are growing up in one of the poorest cities in the US. The 31-year-old spends his own money to feed them when they’re hungry. He gives them a place to stay when they have nowhere to go.

So why do so many strangers want him out of a job?

“You are a disgrace to your high school and a coward.”

“I will help them fire you … I hate you with all my heart.”

“Get the f*ck out of this country if you don’t like it you anti-American asshole.”

Brown – a married father of three – wakes up every morning to emails, Facebook messages and voicemails questioning his intellect, his humanity, his patriotism.
For the past two weeks, the Camden City School District has received dozens of calls from across the country, calling for Brown’s dismissal. A local radio personality denounced his “ignorance, shame and stupidity” on the air.

The sin that Brown committed: on 10 September, at the Woodrow Wilson Tigers’ first game of the season, Brown refused to stand for the playing of The Star-Spangled Banner. Instead, he took a knee in a silent protest.

With the exception of two players, the entire Tiger football team joined him. A local sports reporter captured the incident on video – a row of players kneeling in their black and orange uniforms – and posted it online. By evening, the story had gone viral.

Ain’t that America? It is not all little pink houses and white picket fences. The American ethos will not succeed from the top down. Decades of income inequality, land barons, corporate depravity and arrogant Trumpism have proven that. It will come, if at all, from the streets and ground up.

Read the full story. I implore you, read the thing. It is long, but oh so worth it. Preston Brown is a man, a teacher, a leader, and everything that is America. At least that we are supposed to cherish and that we deign to claim with the drumbeat of “American exceptionalism”.

Colin Kaepernick and Preston Brown clearly don’t know each other in the least. but while Kaepernick started a valuable conversation, let the story of the Preston Browns, and the students he is shaping, be the bigger story. And that is the thing, a single man like Brown or Kaepernick can start a fire, even tend it somewhat, but it is up to those it touches to absorb the heat and take it further. So, for all the focus on Preston Brown, let the admiration also be for the students and players at Woodrow Wilson High who are buying into the message and taking it to heart. This is how a difference is made, both small and large.

Okay, moving along to the games, there are a few good choices in the NCAA. The best of the lot is probably Wisconsin at Michigan State. Sparty, despite their 2-0 record looks off this year, and the Badgers look on. But the game is in East Lansing, so I rate it a pick em. Georgia is at Ole Miss, and I will take the home team in an upset. Jim White’s Gators are at Neyland stadium to take on the Vols. Shaky on this, but will take another home team for the upset. And then there is the Stanford Trees at UCLA. There is an old joke that goes “what happens when the smog lifts in Southern California”? The answer is “UCLA”. Okay, lame joke, can’t pick against a McCaffrey, but this has trouble for the Trees written on it.

In the pros, Jacoby Brissett and the unstoppable Patriots have already dispatched Houstonians. But Brissett injured his thumb, and I am calling for the signing of Tebow to play and win the next game. That would truly cement the Belichick legacy. Broncos at Bengals and Lions at Green Bay will be critical games. The Cheese has looked Swiss with holes early on this season. The Kittehs look dangerous. We shall see. The really exciting matchup is the Steelers versus the Eagles in Philly. Carson Wentz and the revamped Iggles under Doug Peterson have been great so far. But Big Ben, Antonio Brown and D’Angelo Williams are rolling. This should be a great game, but have to take the Stillers. Lastly, Honey Badger and Pat Peterson are coming for these two clowns.

Music this week by John Mellancamp. That is it. Go, set forth, and make America great again (by voting against Trump).