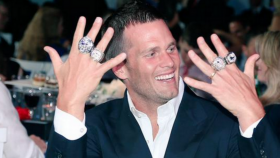 It may not be the biggest game of week five, but all eyes will be on Tom Brady and his return from the idiotic, dishonest and petulant suspension manufactured by Roger Goodell and the NFL. That is going to be the story.

What can we expect? I think I’ll bet on Brady being Brady, especially with the Pats also getting Gronk and Rob Nincovich back. In fairness, Gronk suited up and played a few snaps last week as a test drive, but this will be his first real game back from hamstring recovery time out. Is there some analogue? Yes, there is! Ben Roethlisberger came back from a suspension against the same Cleveland Browns in 2010:

The only real parallel for Brady is two-time Super Bowl winner Ben Roethlisberger and his four-game suspension in 2010 for violating the league’s personal conduct policy.

The Steelers went 3-1 in his absence. They won their first three games without Roethlisberger, but lost the fourth at home. His first game back came against the Browns. (How’s that for a parallel?)

Roethlisberger said during his suspension he worked with his private coach, George Whitfield, four days a week. In the week leading up to the game, the Steelers extended individual drills in practice by 30 minutes to give Roethlisberger more work with his receivers.

Then came his season debut, a Week 6 game against the Browns (because of a bye the previous week). On his opening drive, Roethlisberger threw an interception to Joe Haden inside the red zone.

“I just got a little antsy,” Roethlisberger admitted after the game. “The ball was coming out what we call ‘hot,’ coming out high and strong.”

But he settled down after the first drive, and completed 16 of 27 passes for 257 yards, three touchdowns, and an interception as the Steelers rolled to a 28-10 win.

The Steelers went on to finish the 2010 season with a 12-4 record, and Roethlisberger led them to an appearance in the Super Bowl.

I think Pats fans would be fine tracking that parallel.

In other games, on Thursday night the Cardinals rebounded with a solid win over the hapless 49ers, and look to have Carson Palmer back next week against the Jets on the Monday Night Football game. Hopefully the Cards have righted their leaky ship. We’ll see.

The Falcons at Broncos could be a really good game. The Dirty Birds are flying high so far this year with Matt Ryan and Julio Jones. Last week, Ryan threw for over 500 yards, and Jones hauled in 300 yards worth of that. But this is the Broncos defense, not the suddenly porous Panthers, and the game is in Mile High. The really interesting thing here is that Denver is starting rookie Paxton Lynch even though Trevor Siemian is on the active roster. Be interesting to see if Siemian ever gets his job back.

The 3-1 Texans visiting the 4-0 Vikings is also a great matchup. The Texans are not flashy, but have been surprisingly solid on both sides of the ball so far. The Vikes all world on defense and surprisingly effective with Sam Bradford at QB. Houston is a decent team, and Brock Osweiller will only get better as he settles into his job, but hard to see the Vikes not moving to 5-0. Have to admit, the Bills at Rams doesn’t sound like a great game, but it may really be! Jets don’t look like their bleak road is going to get any easier as they are visiting Big Ben and the Steelers, who are suddenly clicking on all cylinders. Then there is the Giants at Lambeau to see the Packers for the SNF game. Should be an easy call, but the Cheese have had some Swiss like holes in them, and are only 2-1 coming off an early bye. Pack are favored by 7, but this game worries me for Pack. Going to be hard to watch the debate with the Packers on the TV.

Okay, with all the Trumpian excitement, it is a short Trash Talk week, but off we go! Today’s music is an awesome slow burn up to crescendo with I Ain’t Got Nothing But The Blues by the great Joe Williams. It starts off slow, but watch out.