The Jetzon’s Self Driving Auto Car Drone Aint Here Yet 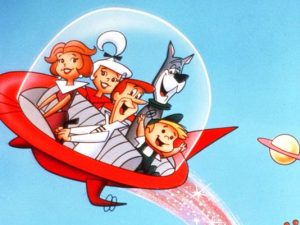 History shows again and again
How nature points out the folly of men.

Yeah, truer words never spoken. Even if in relation to Godzilla. And you can apply that to the relentlessly ballyhooed “autonomous driving automobiles”.

Seriously, this stuff is Henny Youngman type of slapsick comedy. It ain’t happening.

Okay, I am cribbing from Atrios, but dammit, what the hell do you think us conspiracy propagators are supposed to do??

I’m just saying these cars won’t ever (in our lifetimes – sure, eventually the singularity might arrive) really work as hyped and certainly don’t deserve all of the press they’re getting. I also don’t think that even if they did work they’d be a big improvement for all (some) of the reasons people think they will be, but those are more debatable issues which I rarely bother to debate because the fact is the things aren’t going to work. Okay, I’ll define “work.” Basically, you have to be able to tune out 100% over 90% of the time. I’ll even allow for a “last mile” kind of “time for you to drive” thing as long as the rest of the time you can kick back and read your book or whatever. Because if you have to pay attention but usually not doing anything, what’s the point? It’s just better cruise control. A neat feature for some, but nothing more than that.

Ya. I am sure that all of you out there driving their Tesla 3’s will squawk [oh, wait, they are not out yet!]. As I am sure all of you on the waiting list for Tesla 3’s [good luck with that!] that is already years behind technical and production capability at Tesla are oh so defensive of the giant Elon Musk dream. Surely the dream will catch up to reality, it must!

Also, the supertrains between Los Angeles and San Francisco (okay, forget the “cheaper” stuff, that was a joke!) and between New York and Washington DC are totally gonna be ready to roll after New Year’s Eve.

When the candidates talk about their totally awesome “infrastructure and jobs” proposals, maybe ask what the hell they are talking about. Because it is probably bullshit. Hold them to it.