Consent of the Governed 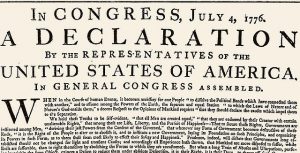 The last time a man touched me inappropriately at work, he tried to massage my shoulders while looking down my blouse. I had only been on my new job a few days at that time; I later found out this same man did this (and worse) with nearly every female co-worker younger than him. He had access to them all as their IT representative. They avoided asking for IT help unless they were desperate.

When I told the division president — our mutual boss at a Fortune 100 company — that every woman had a sexual harassment problem with the IT guy, the president asked me what he was supposed to do about it.

The last time I ever talked with my father about women in the workplace we had been discussing the Anita Hill hearing. “Why didn’t she tell somebody sooner?” my dad asked. “Why report it only after Clarence Thomas’ nomination? It just looks suspicious.” My father had been a supervisor to both men and women for nearly two decades at this point. His naivete and blame-the-victim mentality shocked and disappointed me so badly I couldn’t talk about this topic with him ever again.

I can’t think of any women I know who’ve worked in mixed gender environments who don’t have stories about sexual harassment or sexual assault in the workplace. Even my daughter, so new to the workforce, now has her own stories to tell. And this is just the workplace — these are not the stories women have to tell about harassment, abuse, assault outside of work. They often have worse stories to tell, though even the ones on the job can be harrowing.

Like my friend who was slapped in an elevator by a male foreign national co-worker who called her all manner of awful things. She was so rattled she called me immediately afterward; she asked if she should report it as sexual harassment. I told her that it was assault and battery. But she was so worried about keeping her job she only reported it to her boss and human resources. The batterer, when confronted by management, said it was perfectly normal to treat women this way where he came from. So they sent him back to work overseas without further repercussions.

When Donald Trump’s victims say he acted inappropriately — touching them sexually without permission, taking advantage of their vulnerability as teenagers in dressing rooms, or worse — I believe them. I feel their deep discomfort. I know why they didn’t come forward sooner.

Because even their own kin may shame them or not believe them. Because the problem and the blame will be put on their shoulders and not on the perpetrators or on the authorities responsible for protection. Because the victimization doesn’t end with the revelation of the harassment or abuse.

Because their agency and power to consent will be violated again by a misogynist culture. The only exercise of autonomy they have is suppression of the facts to prevent re-victimization. They have emerged now because the stakes are incredibly high, just as they were in Thomas’ nomination to the Supreme Court, and because there is limited safety in numbers.

Conservative men denouncing Trump after the “grab pussy” video emerged recently revealed something about them. They weren’t upset by Trump’s overt racism against Mexicans or xenophobic rants against Muslims. They only drew the line when Trump appeared to be a threat to their (white) women — “as a husband, as a father of daughters,” they prefaced their rejections of Trump’s behavior.

It’s no surprise they objectify women as things belonging to them. Women are just chattel to be controlled according to their ideology; female votes are to be corralled by cultural subjugation. Conservatives weren’t worried about their women’s votes.

But touching their property without permission is beyond the pale. It is not to be borne. This is the heart of the matter, why Trump’s support is weakening among conservatives. Trump threatens their exercise of control when he takes without their consent.

And while they can’t articulate this very well, it’s the nebulous threat Trump poses to the concept of consent of the governed which now bothers them. If he’ll grab their (wife’s/daughter’s) pussy without their consent (never mind women’s/girls’ consent), what else might this man grab non-consensually?

I’m taking a risk here and making a statement which the rest of the emptywheel contributors may or may not agree with.

Apart from our posts on sports and the arts, this site is about consent. For example, we’ve written about:

— the march toward and conduct of an illegal war, illegal primarily because it was authorized without fully informed consent and the means by which the authorization was obtained was hidden even as it was investigated;
— the collapse of the economy in 2008, after the machinations of investment banks hid the perils of fraudulent subprime mortgages inside unregulated financial vehicles, in a manner to which the public could not fully consent;
— the ramp up to the Affordable Care Act, when single payer as an alternative was never fully considered, thwarting our true, mutual consent; when key representatives were shut out and suppressed, like Planned Parenthood for women’s reproductive health;
— the implementation of pervasive surveillance on U.S. citizens in ways which prevented our representatives from truly understanding the nature and scope of monitoring;
— the rise of technology foisted on consumers without public consent by way of adequate government oversight to ensure its safety and security.

It is this common theme, the consent of the governed and non-consensual acts of bad faith, which moves us to research and write.

Some argue that consent of the governed is rare or untenable. Obtaining unanimous consent is nearly impossible in complex societies. This is a key reason why representative democracy is necessary. We’ve constructed a framework over the last 240 years, though not perfect, operating at the consent of the governed. Government acts without consent — outside of the social contract we’ve built as constitution and law — are illegitimate and deserve vigorous pushback.

The threat to this one concept — our consent to be governed — about which conservatives have finally become concerned with Donald Trump’s candidacy for office. His personal behavior shows gross disregard for both personal and collective consent.

It’s puzzling that so many conservative voters ignore the baggage Trump brings with him. It says something about the depth of their desperation to change the status quo that they would support someone with such an egregiously tainted background. Granted, the rest of the field competing for the GOP’s presidential nomination was pretty lackluster when not flawed. None of them possessed adequate charisma to overcome their individual problems.

Trump, in contrast, has more than a decade of constructed persona at his disposal. His name is a brand polished by highly produced television content aimed at both lower and middle-class Americans, from World Wrestling Federation appearances, to NBC’s reality TV show The Apprentice, to Miss USA and Miss Teen USA pageants. The banality of these appearances during prime time built an expectation among the broadcast TV viewing audience that Trump was benign. Safe, even, afforded repeated access to American homes through their televisions every week.

Their political consent was constructed without their full consciousness.

The public had already become inured to the idea of a broadcast entertainment personality becoming a politician, especially conservatives. Their favorite president, Ronald Reagan, had successfully made the transition from film and TV to the presidency. Many other politicians have since spent a considerable amount of time moving between broadcast entertainment and politics. It’s become normative to expect the thinnest of separations between these roles, to the point that Americans can’t see the production process between the human as a politician and the produced personality as branded content. They haven’t realized they are being sold a product which they buy with attention.

And they bought Donald Trump — hook, line, and sinker.

Conservatives shot themselves in the foot, aided and abetted by Bill Clinton’s administration (oh, the irony). The elimination of the Fairness Doctrine prevented exposure to alternative views over broadcast networks, relying wholly on licensees to operate for the greater public welfare under the terms of their Federal Communications Commission license. The increasing consolidation of broadcast networks under a smaller number of media companies — coincidentally owned or controlled by conservatives as major shareholders or as editors — assured a consistency of content across the entire country. Large swaths of rural America had few if any alternatives to networks carrying conservative content.

Over time, internet access improved to rural America offering access to other alternative media, but not before the same regions with limited media had been fully indoctrinated in either conservative perspectives via talk radio or a narrow world view acquired from a small number of TV broadcasters. When they took to the internet, the indoctrinated sought the same perspectives.

In short, conservatives built their version of Radio Rwanda.

Decades of the Overton Window applied to conservatives’ ideology — gradually promoting the unthinkable and unacceptable to popular and policy — both assured conservatives with an authoritarian bent would remain corralled under the Republican Party, to serve the corporate interests of those who funded the party. But assuring these voters were captive and clearly separate from liberal ideology also assured another corporatist wolf was allowed in with their sheep.

Trump was on TV, and nobody on talk radio was bashing him. He must be safe, especially since he looks and sounds like everything conservatives promote as positive: anti-tax millionaire with family. America’s Radio Rwanda propelled Trump-as-construct everywhere.

And now we know the rest of the story — or most of it. Conservatives brought a viper to their breast after making a pet of it, and now their political party is dying from its bite.

Like Rep. Jason Chaffetz, now voting for Trump, though only weeks ago he said Trump’s “locker room talk” was offensive; only months ago Chaffetz railed against the poisoning of Flint. Does Chaffetz really believe that Trump as president would do anything to support Flint let alone prevent other similar crises from happening? Does Chaffetz really believe Trump will protect the women of his family, let alone halt his locker room talk about women? What is it that Chaffetz as a conservative is really conserving, along with the rest of his House cohort? What is it his political party really stands for?

Ditto for Senator Mitch McConnell, who can’t be bothered to do anything more than laugh off Trump as his party’s leader.

And now they find they have been assaulted; their party has been taken from them.

Do they muddle along with and enable the abuser, trying not to make waves until they are rid of him, a la Paul Ryan?

Do they openly reject him and fight back when Trump turns on them, hoping like hell he is not elected and won’t raze them to the ground afterward?

Do they tack back and forth during these last two weeks of the election season, risking the displeasure of Trump’s supporters while trying to retain their position?

They could ask any woman who’s been sexually harassed or assaulted how they lived with their situation. They understand only too well what it’s like to suffer the loss of their agency and autonomy without their active, informed consent. Especially when no one else believes in them.

The rest of us will have to fight like hell to make sure this serial abuser doesn’t grab our country along with our pussies.

Security, Territory and Population: Foucault on Power FBI Has Almost 20 Cybers Stationed around the World