Waveland and The North Side, Sweet Home Chicago 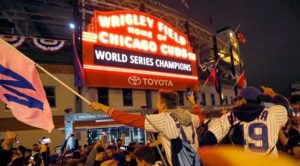 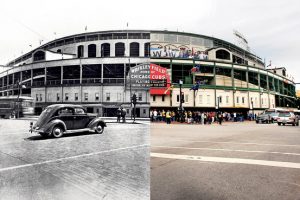 I was raised in a pretty educated house. We travelled too, from Phoenix to El Paso to Dallas, Houston, New Orleans, Memphis, Miami and Detroit. But those were hit and run trips, most by air, some by car, when visiting grandparents and other relatives during the summer. Nevertheless, I thought I knew the country well. I had also already spent portions of summers working in Santa Monica restoring glorious cars and sometimes meeting stars.

I was just turned 18, a man or the world, and god I knew it. But I was really none of that at all. I didn’t know shit.

Then I started college and moved into a dorm. By happenstance, at Arizona State University, I was assigned to an asylum, er floor, chock full of similar kids, on that floor almost all from Chicago and New Jersey. The first few days were an amazing, though not rude in the least, awakening. One group dragged me, literally almost kicking and screaming, to see Bruce Springsteen rock the venerable, and historic, Grady Gammage theater at ASU almost to the ground. That was life changing in a way.

The others were the Chicagoans. They taught me the love and misery of the Cubs and the perpetual Windy City. And Chicago blues and rock. Many of the Chicagoans I met that way in college are still friends to this day. Their parents all came out, then and now as they can, for Spring Training to see their Cubbies. Being from here, I always took spring training for granted growing up as a kid. It was kind of a yawner. But the Cubs fans had a love, purpose and passion that was incredible. Anybody that went to the old Hohokam Park knows how greatly insane, drunken and wonderful it was.

Fast forward to the present day. One of those Chicagoans had parents who, when they retired, moved here permanently. To be close to their son and the winter home of their beloved Cubs. I knew them well. The father wanted to see the Cubs in the World Series before he died. He did, but not by much. He slipped into peaceful sleep right after they won the National League Championship, and never woke up. But, ain’t that a Cubs fan? This is for you Richard, RIP.

That is my own personal story of how and why the Cubs touched me, not just this year, but long ago. The stories are legion. Tell us yours.

The inestimable Wright Thompson has penned a simply beautiful piece that captures so much of the everything goodness that is the Cubs World Series win:

CUBS FANS awoke Wednesday to one last wait, with little to do before Game 7 but think, about themselves and their families, about the people who’ve come and gone during these 108 years of failure. Hundreds found themselves drawn to Wrigley Field, where workers were already breaking down the concessions and cleaning out the freezers. Some people said they didn’t even mean to come. They started off on a trip to the store and ended up standing in front of the stadium’s long brick wall facing Waveland Avenue. Many wrote chalk notes to the dead. Some dedicated messages. This one’s for you, Dad. Others wrote names. Dan Bird. Ben Bird. Eugene Hendershott. A man with a bright smile but melancholy eyes wrote the name of his late wife, Andrea Monhollen. They met four blocks from here, on Racine. She’s been gone six years.

He looked around at the names, each one as special to some stranger as his wife’s name is to him. All these chalk ghosts longed to see a day like this one. Each name represented an unfulfilled dream. The big bright murals made the wall seem fun and festive from afar, but a closer look revealed life stripped of romanticism. “A lot of people waited their whole lives,” Motiejunas said. He took a picture of the wall and then left, walking through the light rain that had begun to fall.

There is no way for me to recommend you reading Thompson’s entire piece enough, it is fantastic and a tear jerker. And if you think that quote from the top is good, you REALLY need to see the rest.

Sports are a lazy diversion from reality in America I guess. Or they are a metaphor for everything that is awesome about America. Or it is just a game. Or, just maybe, all of the above.

It has been a long and painful slog through the swamp of an ugly political season. One that started far too early, and promises to never stop even after the election. I could insert links and cites, and yadda, yadda, yadda but what difference does it make anymore? One candidate was born a Cubs fan, and the other literally thinks he was the second coming of Babe Ruth and the world simply was deprived of recognizing his narcissistic awesomeness because he went into the business (of bankruptcy and fraud) world instead.

TWENTY MILES NORTHWEST, cars parked in groups along the winding paths of the All-Saints Cemetery. An hour remained until the 5 p.m. closing time. It’s a Catholic burial ground, out in the middle-class suburbs, and there are dozens, maybe hundreds, of Cubs flags and hats and license plates and signs. It’s one of many places around Chicago this past week where the conflicting ideas of joy and pain leave the realm of the psychological and become attached to action. People come here for many reasons, to say a little prayer, or talk to someone, to themselves, or to believe that their loved one knows what is happening tonight. Last Friday, an old man in a Cubs jacket stood over a grave and left a pennant and a Cubs pumpkin. Yesterday, a middle-aged woman named Maureen stood for the longest time at a grave not far away. A sign said “Believe.” Maureen touched her hand to the Cubs logo on her chest and smiled, looking back at the ground.

Then she pointed across the rolling hill to the most famous grave in the cemetery, which is where she was headed next, to pay respects to Harry Caray before going to watch the game. His stone has green apples on top, an inside joke referencing a quote about the Cubs one day making it to a World Series just as surely as God made green apples.

Wright Thompson has painted the perfect picture of the Cubs fan. It touched me. And made me remember so many things, and so many people. I know them. You know them. They are us, and we they. Wright also made me forget for a bit the intellectually demeaning tornadic hell that is the 2016 election. I hope you will find the same moment of peace.

Right now, football is boring, Formula One sucks and the NBA doesn’t yet matter. So, this is yer Emptywheel Trash Talk for this week. Share your stories and thoughts. Music is Sweet Home Chicago. There were a lot of versions to choose from, but this seemed to be the right one. The original Robert Johnson version. Keep in mind, when Robert Johnson first recorded that song, the Cubs had already not had a World Series victory for 28 years. That string only ended this week. As a bonus, I also include a newer version by Eric, BB, Buddy, Mick and some dude named Obama. Have a great weekend folks.

Friday: When the Beau Breaks and Brakes FBI’s Demographics: No Pot Smokers, but Lots of Middle Aged White Men