When Trump Brought Romney To Heel, or Further Adventures in the Cabinet of Deplorables 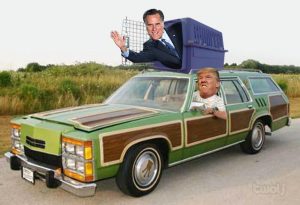 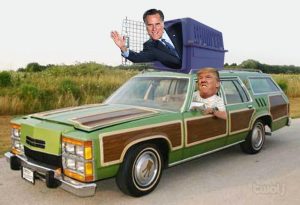 Karma is a bitch, or so it is said. I think it is currently. Back in the day, Mittens was famous for being such a cheapskate cheeseball (yeah, despite the car elevator, which seems quaint now compared to Trump’s ostentatiousness) that he loaded the family dog into a small box coffin mounted to the top of the family station wagon to go on family vacations.

The dog was named Seamus, Mittens was an anus, and the incident became famous. But the long ago incident dogged Romney in the 2012 election. Sometimes, things come back to bite you in the ass.

Welp, here we are deep in 2016 and that dog bites Mitten man story is back. Romney, who seems a decent chap in relation to the current Cabinet of Deplorables under consideration by Team Transition Trump, is suddenly – supposedly – under consideration for a Cabinet post. Reportedly the Secretary of State slot, but possibly others as well.

Seems hard to square since Mittens was there ripping the Donald a new anus as recently as last March. But that was then, and this is now. And…..now…..the major media is all agog that the Trumpeter could be soooo rational and awesome as to be assembling the vaunted “Team of Rivals”. Here is everybody’s favorite Mark Halperin replacement stooge, Chris Cillizza of WaPo’s “The Fix”, milking the mad cow for every drop he can:

Again, this would, largely, run counter to how Trump ran his presidential campaign. But that would also make picking Romney all the more powerful a symbol. Campaigns are one thing, Trump would be saying, but being president is another. I want to be surrounded by the best people for the job — no matter what we said about each other in the past.

This is, of course, the whole “Team of Rivals” concept that garnered President Obama so much good press in his own transition period back in late 2008. Trump has further to go — a lot further to go — than Obama did to heal the rifts within his own party and answer doubts about his readiness to do the job to which he was elected. But the Romney meeting is a step in the right direction. Getting Romney to sign on would be an even bigger one.

This is, of course, a boatload of steaming shit. Hey, it is the Cillizza Fix, what did you expect? There are a plethora of others in the major media, including cable, deep diving into the same ridiculous bunk.

Take a look at who Trump has signed on to officially so far for his chosen team: Mike Flynn, Jefferson Beauregard Sessions, Steve Bannon. Notice anything in common there? Perhaps near insane levels of bigotry, hatred and ostracization of others? Gannon may seem the most inert, but that is wrong, he is just the least known outside of the annals of white neo-Nazi Breitbart nationalism. But they are all of a core.

So, let us be honest, will the Senate Judiciary Committee put up any real roadblock to a dyed in the wool unreconstructed racist like Jeff Sessions? Hahahaha, no, of course not. Republicans own the SJC, and even the Dems will ultimately give in to Sessions’ nomination. They will put up a nominal “stern questioning” as DiFi has already so gallantly promised, and then they will cave completely.

Will discerning Republicans with morals object to Sessions’ nomination? Hell no. The single most quirky and sometimes actually moral GOP member of SJC, Jeff Flake, has already strongly and early come out in favor of Beauregard’s nomination. If you know SJC, this is over, and welcome to unreconstructed racist Jeffrey Beauregard Sessions as AG.

The point is that Trump is the racist bigot he has always promised to be. Do NOT buy in to the cloying clickbait rationalizing and normalizing pablum of the main and cable media. They already know they are under siege from Trump, and are already cowering in the midst. The media we ought be able to count on are already “asking questions” about what they will do, while they do nothing to stop the nonsense. It is already a stunning abdication, as if the performance during the election were not proof enough.

So, what does Trump’s meeting with Mitt Romney Saturday really mean?

That Trump is reasonable and might let Mittens, who insulted the hell out of Trump not long ago, be one of his key Cabinet members? 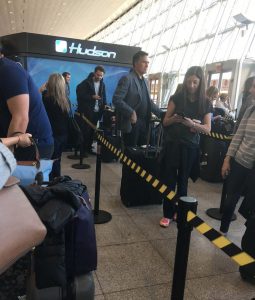 Hahahaha, no. Don’t be foolish. This is a staged clownshow for the idiot media who, of course, are lapping it up. Secretary of State for Mittens? Hahahahaha, not likely, Trump is not that gracious, forgiving or intelligent. Heck, Mittens had to carry his own shoes through TSA, all by himself. If the Trumpalo wants you, that is not how it happens.

No, what is going on here is that Trump is bringing Romney, who insulted him and disrespected him, to heel. Like a dog. Chris Christie, who supplicated and humiliated himself over the better part of a year to support Trump, was sent packing like he had the plague. That was only because Christie had slighted the son-in-law’s father in the past.

Romney fired all his guns in anger in a direct broadside against Trump himself. Sure, yep, totally, Trump will now make Mittens Secretary of State.

Probably ought roll with that meme media members. Uh huh. Trump is taking you, and Mittens, on a ride if you think Romney is getting any significant policy post like SOS. Nope. Oh, but the way, Ted Cruz isn’t either. Give it a rest.

[The graphic at the top, which is totally awesome, is by the one and only TWolf, our friend for a long time. Follow Tom at @twolf10]