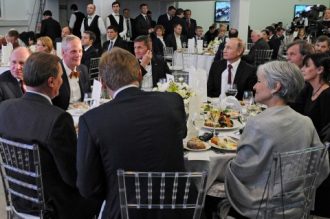 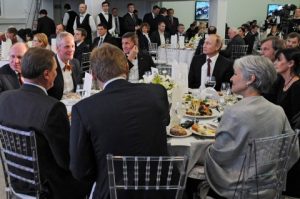 Jill Stein, admittedly, always struck me as a bit of a naive and somewhat unhinged candidate. But, Stein was the “Green Party” candidate and, once Bernie Sanders lost, became the go to darling for ill advised voters and activists that were far too willing to wreck the world with Donald Trump than consider the circumstances and vote for an eminently qualified, albeit terribly flawed, candidate in the form of Hillary Clinton. It is hard to argue with anarchist, blow it all up, demagogues when trying to protect a lame, and status quo, candidate. Even when the ultimate opponent is a raging racist, bigoted, misogynistic, female choice hating and torture loving shill like Donald Trump.

So many otherwise Democratic voters went off and voted for Stein and/or Gary Johnson. Did it make the “final difference”? I have no idea, but there is certainly an argument that could be made.

Was it the Jim Comey FBI factor from the stunningly inappropriate rogue actions by the FBI Director putting his self righteous thumb on the electoral scale in both the start of the critical summer elections season and, then, yet again in the last two weeks before the election? It is easy to make that argument, irrespective of any other factor.

Was it that Hillary did not expend personal and campaign time and dime in Wisconsin and other Rust Belt states when she did a lost, but very much growing, cause venue such as Arizona? Easy case for that argument as well.

The actual data and competent reportage seems to indicate that all of the above were significant factors. It strikes me that is right.

All of the above factors fed into the defeat of Clinton and the election loss by her, if only by the electoral college, at the tiny hands of Trump. So be it. That is what happened under the electoral laws and process (yes, let us not forget the pernicious meddling of Russia and/or Wikileaks, whether they are coupled or not) pertinent to the 2016 US Presidential election. But, like the result or not, that was all pursuant to the Constitution and election laws as are currently extant in the United States. There is not one competent piece of evidence that the actual vote itself was “hacked” or “rigged”. Just none.

Which brings us to the much ballyhooed action of Jill Stein to crowd fund and conduct audits and or recounts in the key states of Wisconsin, Michigan and Pennsylvania. The second she started her effort, I opined it was an attention grabbing craven play by Stein, and not a legitimate effort with any eye to any substantive results. On a more private forum I intoned:

But that is the thing: It IS bomb throwing, and stupidly so. There is NO evidentiary basis for fraud or mistake that I have seen. The guy who started it, [J. Alex] Halderman himself, admits as much legally when he says he thinks it is most likely poll inaccuracy, not anything nefarious.

I know all the beaten down, especially Clinton diehards, that cannot fathom how she blew this election, want to grasp for something. But it just isn’t there.

I stand by that completely. What Jill Stein is doing is blatant self promotion, list building, reputational repair where it is undeserved, and slush funding for an incoherent Green Party. It is detestable to the extreme. Stein has glommed onto this recount scam as a way to serve herself, she certainly is not serving anything else.

To quote a significant Democratic election law attorney, and longtime friend of this blog, Adam Bonin:

“If there were something to do here, there are a lot of us who would be jumping on it”

Early on the hashtag #AuditTheVote was attached to this chicanery. Here is the problem with that – two out of three of Stein’s target states already “audit the vote” as a regular matter of law without the need for Stein’s self serving injection into the matter. In fact, Stein’s primary target, Wisconsin, has a reasonably robust random audit provision in Wisconsin Revised Statute 7.08(6), which has been generally deigned to require:

Well, that is actually pretty robust. And all of which would have been, and will be, performed without the preening self interjection of Jill Stein in her first state of concern, Wisconsin.

Just Wisconsin? Nope. Pennsylvania also has an inherent audit provision, though not quite as robust as Wisconsin. The bottom line is, though, there are already “audit the vote” provisions in two out of three of Jill Stein’s targets, even though she declined to say so in her propaganda seeking funding to stay in the spotlight and reconstruct her reputation. In fairness, Michigan has no such automatic audit provision, so there is that.

Next, you need to consider that there is a substantive difference between “audits” of the vote and flat out recounts. Stein has always been about recounts, despite the bogusly applied #AuditTheVote nomenclature applied by Stein and her glommers on. Recounts are expensive, labor intensive, and time consuming. And they are asinine where there is not a single shred of competent evidence to support fraud or mistake that could, even in the remotest possibility, change the outcome in a given state or states.

And, let us be crystal clear here, there is still NO competent evidence whatsoever of fraud, mistake or other irregularity that could change the result. None. And that is the thing, unless there is fraud, mistake or systematic error, recounts can do nothing to legally support a challenge to the election results. A challenge has to stand up in court. It cannot be thin and based upon rote supposition and suspicion. Even if Stein’s folly turns up a minor discrepancy here and there, that will not suffice.

The vote differential, again in Wisconsin for instance, between Clinton and Trump currently stands at 27,259 votes. Yes, that is less than the total of Stein, so despite the wild claim she threw the election that some Clinton supporters have thrown, I will not. Some Stein voters were never going to vote for Clinton; so while Stein’s vanity run deserves ridicule, it does not, in and of itself, “prove” Clinton would have won but for Stein. Close enough for ridicule given that Trump is the result? Sure. But, again that, too, holds for ridicule of Clinton’s own arrogant and detached campaign and the fatally pernicious effects of the completely rogue arbiter of his own justice, James Comey.

So, where does that leave us? With a Norma Desmond like self promoting grifter, dying to redeem her name and stay in some/any spotlight, in the form of Jill Stein. She was a cancer on the election (hey, her dinner with Putin and Mike Flynn was cool though!) that, at a minimum, helped elect Trump, and she is sticking around to create more hell now that said deed is done.

This is absurd. Jill Stein is a grifter and a fraud. And she is playing this opportunity to, first off, list build for herself and the Greens, secondly, resuscitate her and their name, thirdly, stay in the press, and lastly, create an amorphous slush fund to continue those things. Stein is succeeding beyond wildest expectations if your idea of the normal course of business is Donald Trumpian level grifting.

For a woman who raised only $3.5 million during her entire vanity run for President, Stein has now raised nearly $6 million dollars in far less than a week on this scam. That is NOT because Stein has dedicated Green Party followers wanting to bleed yet more money into their candidate after the election; no, it is because desperate Clintonians are seeking some way, any way, to stop Trump. And playing on that desperation is exactly the fraud of Jill Stein.

A common refrain I see is that, “golly, there is no harm, and much good, that can come from confirming the vote”. But that is just more self serving balderdash from the desperate and/or Stein acolytes. In fact, there is great harm that can come from Stein’s shenanigans. Here is Rick Hasen from the Election Law Blog, quoting the Wisconsin Journal Sentinel:

Wisconsin could be at risk of missing a Dec. 13 deadline to certify its 10 electoral votes if clerks can’t complete an expected recount by then.

Hitting the deadline could be particularly tricky if Green Party presidential nominee Jill Stein is able to force the recount to be conducted by hand, Wisconsin’s top election official said.

Stein — who received just 1% of the vote in Wisconsin — has promised to file for a recount by Friday’s 5 p.m. deadline in Wisconsin. She is also planning to ask for recounts in Michigan and Pennsylvania, which have deadlines next week.

A federal “safe harbor” law requires states to complete presidential recounts within 35 days of the election to ensure their electoral votes are counted. This year, that’s Dec. 13.

What is the upshot of this? Easy, Stein’s effort could easily place Wisconsin, in light of the December 13 deadline, of missing the deadline and disenfranchising all voters in Wisconsin. Yes, there are potential repercussions from actions like Stein is taking, especially when there is no known basis or grounds whatsoever evidentiary wise to support them. And that is just Wisconsin. Michigan and Pennsylvania are in even bigger jeopardy thanks to the self serving hubris of Jill Stein, should she actually continue on to file in those states as promised, without any rational basis for challenging the vote therein.

Lastly, while I have been writing the instant post, the attorney for the DNC and Clinton Campaign, Marc E. Elias, has weighed in on Medium with an official take for both himself and, by all appearances, the aforementioned campaign entities. The Reader’s Digest version, by my eyes, is that, while the DNC and Clinton camps are going to join into the Stein effort, they have never seen any basis for it, and are being dragged into a position of noticing their appearance and joinder simply in order to preserve their rights to be involved should Stein’s group go so far off the rails or, in the remotest of all potentialities, find anything. That is not joinder with enthusiasm, it is joinder to protect your legal voice. Trump is now doing the same for similar reasons. I do not blame either Clinton or Trump for doing so, in fact, Stein’s idiocy put both of said parties in that regrettable posture. Don’t cast your eye askew for one second at Elias and the Dems, nor even Trump and the Repubs, ….Stein and her idiotic self serving publicity play made them do it.

In short, this effort by Jill Stein is nothing more than a self promoting vanity play. If you want to donate to that grift, by all means, go ahead. But don’t blather about how it is going to help democracy or promote fair elections. That is absurd. In fact, just exactly as absurd as Jill Stein’s cynical grift on her current donors who are far different than her few and far between Green donors.

Stein is scamming the dispossessed. That is a Trumpian level fraud.