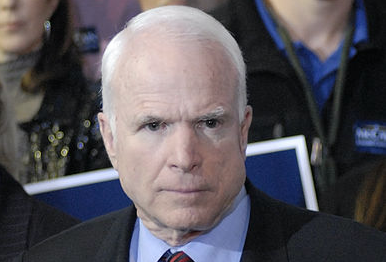 The Saturday before Thanksgiving, John McCain made some strong statements about whether President Trump will be able to resume torture.

“I don’t give a damn what the president of the United States wants to do. We will not waterboard,” McCain told an audience at the annual Halifax International Security Forum. “We will not torture people … It doesn’t work.”

McCain’s comments have gotten quite a lot of approving press since.

But that approving press is misplaced.

After all, tough words will not prevent Trump from resuming torture — no matter what NYT’s rather bizarre story claiming there are obstacles to doing so claims. As I laid out weeks ago, the bureaucratic work-arounds are already in place.

No. The single most effective way for Senator McCain to prevent Trump from resuming torture is to ensure the people he appoints are actually opposed to it.

Already, Trump has named two pro-torture Republicans to top positions: Trump’s Attorney General pick, Jeff Sessions, voted against the anti-torture amendment McCain wrote to try to codify the law. In response to the release of the Torture Report, Trump’s CIA Director pick, Mike Pompeo, declared the torturers “are not torturers, they are patriots.”

McCain — whose comment on torture came the day after Trump named these appointees — has not committed to opposing their nomination. Instead, he just wants to make strong statements that will do little to prevent Trump from ordering Pompeo to resuming the torture.

Maybe that’s why McCain is getting so touchy about the President-elect.

Today, he told two different reporters he didn’t want to answer questions about Trump. Here’s what he said to HuffPo’s Laura Barron-Lopez:

I will not discuss President-elect Donald Trump, ok? And that is my right as a Senator. I do not have an obligation ma’am to answer any question I don’t feel like answering. I’m responsible for the people of Arizona and they just [re-elected] me overwhelmingly.

He said something similar to CNN’s Manu Raju.

Cranky-as-fuck John McCain is ratcheting it up!

But he’s going to need to crank it up even more. McCain, with just two of his colleagues, has the power and moral authority to oppose pro-torture appointees. That would require confronting the leader of his party. But it is also one of the only real ways to prevent the US from resuming torture.

WaPo Cleans Up a False Michael McFaul Allegation about RT Look Closer to Home: Russian Propaganda Depends on the American Structure of...