Vox Media, Where You Can Make $15 an Hour to Insinuate Fight for $15 Is Just about Alliteration

A lot of people are bitching about the sheer snottiness of this passage in a Vox piece arguing that fighting for $15 minimum wage will lead, instead, to the automation of those minimum wage jobs.

The McDonald’s experiment with touchscreen ordering systems illustrates the potential problem with making high minimum wages effective across big states like California and New York — both of which passed minimum wage increases this year. If McDonald’s automates its locations in Manhattan, San Francisco, and Silicon Valley, displaced workers shouldn’t have too much trouble finding alternative work in the booming economies of these cities as barbers, servers at full-service restaurants, nannies, and so forth. With lots of wealthy customers around, there’s a robust demand for unskilled service workers there.

But the outlook might not be so rosy in cities like Fresno, California, or Rochester, New York, where the economy is not booming and average wages are much lower. If a $15 minimum wage causes fast-food jobs to be automated in these cities, workers may not be able to find alternate work. A law designed to put more money in workers’ pockets could wind up putting a lot less money in their pockets instead.

It’s easy to get people fired up about an alliterative slogan like “Fight for $15.” But alliteration isn’t necessarily a good way to choose a policy goal. The implicit idea here — that people everywhere should get the same minimum wage whether they live in a booming, expensive metropolis or a struggling town with a low cost of living — doesn’t make a lot of sense. [my emphasis]

The Fight for 15 has more to do with what is a living wage than poetic devices. Indeed, even $15 actually doesn’t pay enough to rent an apartment, even in the hinterlands.

But I’m just as disgusted by the suggestion that if people live in booming economies, they can get jobs making $15 an hour as a barber or a restaurant server.

They also could, with some prior experience, apply to be Vox’s “race and identities” writing fellow for … $15 an hour. 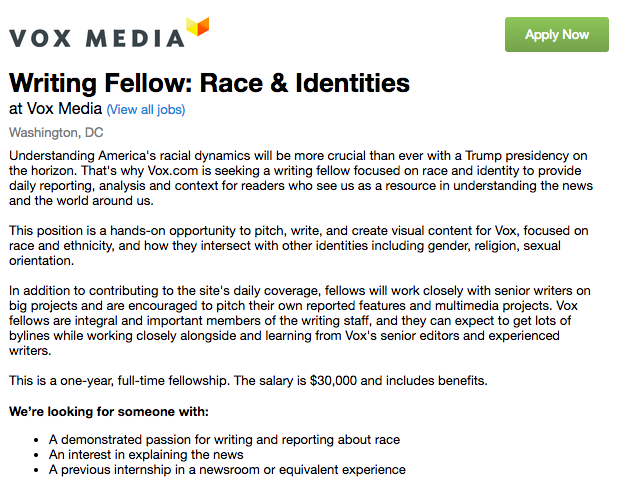 And that’s to live in NYC or DC, cities where $15 an hour is well below a living wage.

Maybe Vox just plans on automating their race coverage if no one will take this job?

Update: Vox’s Managing Editor just announced on Twitter they will be increasing the rate for this and other fellowships. Good!

tweets from our circle
bmaz@bmazRT @doug_ramsdell: Amen. too much glass, too much concrete for bullets to ricochet off. only way the opinion would be worse is if they nati…44 minutes ago23 May 2022
bmaz@bmazHere is Adam Schefter, star "reporter" for @espn once again unabashedly shilling for a gambling business. What a li… twitter.com/i/web/status/1…45 minutes ago23 May 2022
bmaz@bmazCowboy Chuck rides in. This is hilarious: twitter.com/awfulannouncin…55 minutes ago23 May 2022
emptywheel@emptywheelThis sounds like a job for Mike Flynn. twitter.com/pbump/status/1…2 hours ago22 May 2022
RayneToday@raynetodayLOL Perhaps the mythical "single server" the right-wing wanted turned over after the DNC was hacked already resides… twitter.com/i/web/status/1…8 hours ago22 May 2022
Ed Walker 🍞🌹💉💉@MasaccioEWRT @espinsegall: Good morning. So Ginny Thomas was paid for many years to lobby against the ACA while Clarence Thomas on several occasions…12 hours ago22 May 2022
Ed Walker 🍞🌹💉💉@MasaccioEWRT @Artemesia44: We have a SC that is almost entirely right wing Catholic and is trying to impose its Opus Dei, handmaiden cult views on th…12 hours ago22 May 2022
Jim White@JimWhiteGNVWe feast tonight! The butts cooked faster than expected., but will hold safely wrapped in foil and in a cooler unti… twitter.com/i/web/status/1…1 day ago21 May 2022
RayneToday@raynetodayRT @darth: i know this is completely unrelated but imagine spending nine fuckin hours with that guy2 days ago21 May 2022
Jim White@JimWhiteGNVWho’s ready for baseball at the end of the rainbow? pic.twitter.com/QWJZZK5LpC2 days ago20 May 2022
Jim White@JimWhiteGNVMore than fifty folks from the church are signed up to eat pulled pork in my back yard tomorrow evening. Fortunatel… twitter.com/i/web/status/1…2 days ago20 May 2022
RayneToday@raynetodayRT @wyatt_privilege: Not a mind blowing observation but the game now is to send crazy shit upstairs to scotus and invite them to remold, sc…4 days ago19 May 2022
RayneToday@raynetoday~ding-ding-ding~ Accurate. twitter.com/robinmarty/sta…4 days ago18 May 2022

Seven Democrats Write Obama Asking Him to Declassify More Information on Russian... CYBERCOM versus NSA: On Fighting Isis or Spying on Them
Scroll to top