Does Dark Marketing Have a Function in Trump’s Mobs?

As you likely know, Trump has sicced his mobs onto one of the first non-public figures since the election: the United Steel Worker organizer for the Carrier plants affected by Trump’s involvement, Chuck Jones.

On Tuesday, Jones said that Trump “lied his ass off” about the Carrier deal, pointing out the same thing I did: that 300 of the jobs Trump took credit for “saving” were actually white collar engineer jobs. Jones said they were never slated to move to Mexico.

At first, Jones’ comments only showed up in print outlets and Trump had no response. But then CNN ran the comments (it seems, though this is not yet proven, that Trump primarily tweets out when things get on TV). And Trump responded. 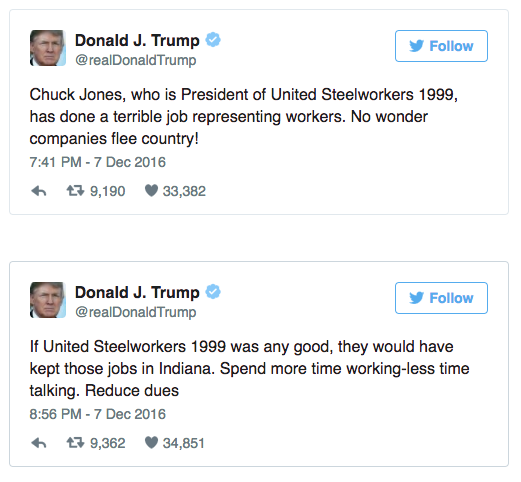 The response, in general, was encouraging: rather than just report that Trump had attacked a labor organizer, several TV programs had Jones on, resulting in giving him even more opportunity to call Trump a liar.

Except then the creepy calls started.

Half an hour after Trump tweeted about Jones on Wednesday, the union leader’s phone began to ring and kept ringing, he said. One voice asked: What kind of car do you drive? Another said: We’re coming for you.

He wasn’t sure how these people found his number.

“Nothing that says they’re gonna kill me, but, you know, you better keep your eye on your kids,” Jones said later on MSNBC. “We know what car you drive. Things along those lines.”

“I’ve been doing this job for 30 years, and I’ve heard everything from people who want to burn my house down or shoot me,” he added. “So I take it with a grain of salt and I don’t put a lot of faith in that, and I’m not concerned about it and I’m not getting anybody involved. I can deal with people that make stupid statements and move on.”

This is, of course, not new with the election. Trump did it all through the campaign, particularly targeting protestors at his events. But this makes it clear he is perfectly happy to target individuals for retaliation when they call him on his lies.

I’ll have more to say about what I think the appropriate response to this is (though as I said, I was reassured by last night’s performance, to a point).

But given the way last night’s tweets led so quickly to threatening phone calls, I wanted to raise this article [This is in German, but an English translation is due soon; I read it using Google translate; I will update with quotes when it is translated], on the psychological approach behind Trump’s Cambridge Analytica work during the election (which were covered in less detail in this Bloomberg article). It describes the model behind Cambridge Analytics, the amount of data it collects, and the kind of accuracy it claims. The article describes how closely the model has been integrated with Facebook. And it describes how CA got bought by Strategic Communications Laboratories, which has been used for things like influence campaigns in Afghanistan. The article then describes CA’s role in Brexit, and how first Ted Cruz and then Trump came to rely on it (partly at the direction of billionaire Robert Mercer. The article then describes how CA uses highly individualized maps of individuals to target advertising.

The success of marketing by Cambridge Analytica is based on the combination of three elements: psychological behavioral analysis according to the Ocean model, big-data evaluation and ad-targeting. Ad targeting, that is personalized advertising, that is advertising, which adapts as closely as possible to the character of an individual consumer.

Nix frankly explains how his company does it (the lecture is available on Youtube free). Cambridge Analytica purchases personal data from all sorts of sources: land registry entries, bonus cards, dial-up directories, club memberships, journal subscriptions, medical data. Nix shows the logos of globally operating data traders like Acxiom and Experian – in the USA almost all personal data are available for purchase. If you want to know where, for example, Jewish women live, you can simply buy this information. Including telephone numbers. Now Cambridge Analytica crosses this number packets with voter lists of the Republican Party and online data as Facebook Likes – then one calculates the Ocean Personality Profile: From digital footprints suddenly real people with fears, needs, interests – and with a residential address.

The article goes on to describe (as Bloomberg had) how Trump used dark ads, targeted to very narrowly tailored groups, to depress Hillary’s turnout.

There are a lot of implications of all this, if the targeting is as effective as CA likes to claim. But I wonder whether Trump intends to use it as part of his governance strategy (there were reports that Steve Bannon only agreed to join the campaign if he got access to the data). Obviously, a Trump Administration could use such an approach to apply pressure on specific legislators.

But people close to Trump (this is all hypothetical, but this is the kind of thing you keep a plausible deniability distance away from the principal) could also use it to rile up anger in response to perceived slights of the President.

Trump has been playing a double game. The firing of Michael Flynn (the son) from the transition team — in part because Flynn had a role in riling up PizzaGate — makes it clear Trump wants to maintain a visible distance from the violence his supporters commit. But Trump has always relied on mobilizing his mob to heighten the illusion that he is under attack, and his persistence in doing so after actual violence shows it is intentional.

So what might Trump’s team do with a proven communication program that can communicate with almost no notice?