Democrats Can Do Better than “Wonk Harder” on ObamaCare Going Forward

Sarah Kliff has finally done what left wonk journalists should have done years ago: go interview people from Kentucky about their understanding of and feelings about ObamaCare. KY is, with WV, the state in which ACA achieved its best results, with the number of uninsured going from 25% to 10% of the state. And yet Democrats in KY have been utterly hammered since ACA passed.

Kliff spent a lot of time actually listening to voters to understand why they voted overwhelmingly for a guy who promises to scrap ACA in its existing form (though he always promised to replace it with something better).

Here’s how she summarizes what she heard.

Many expressed frustration that Obamacare plans cost way too much, that premiums and deductibles had spiraled out of control. And part of their anger was wrapped up in the idea that other people were getting even better, even cheaper benefits — and those other people did not deserve the help

There was a persistent belief that Trump would fix these problems and make Obamacare work better. I kept hearing informed voters, who had watched the election closely, say they did hear the promise of repeal but simply felt Trump couldn’t repeal a law that had done so much good for them. In fact, some of the people I talked to hope that one of the more divisive pieces of the law — Medicaid expansion — might become even more robust, offering more of the working poor a chance at the same coverage the very poor receive.

Significantly, Kliff dispels one explanation always given for why Kentuckians hate ObamaCare so much: purportedly because the state had hidden that the state’s program was actually ObamaCare. All but one of the people she talked with knew they were getting ObamaCare.

All but one knew full well that the coverage was part of Obamacare. They voted for Trump because they were concerned about other issues — and just couldn’t fathom the idea that this new coverage would be taken away from them.

Which leaves the two major complaints with the law: expense and the divisiveness associated with two-tiered benefit programs.

We’ve known since before the bill passed that it was too expensive, such that middle class families would still go into debt even with fairly normal life medical care, including normal childbirth. At the time, the wonk boys were talking among themselves about how they needed to push back against such claims.

But Kliff puts a face to the consequences of that expense, where people use precious disposable income for insurance they know they won’t use.

The deductible left Atkins exasperated. “I am totally afraid to be sick,” she says. “I don’t have [that money] to pay upfront if I go to the hospital tomorrow.”

Atkins’s plan offers free preventive care, an Obamacare mandate. But she skips mammograms and colonoscopies because she doesn’t think she’d have the money to pay for any follow-up care if the doctors did detect something.

Atkins says she only buys insurance as financial protection — “to keep from losing my house if something major happened,” she says. “But I’m not using it to go to the doctor. I’ve not used anything.”

She also focuses on something that got discussed during passage, but not in as much detail: the degree to which the two-tiered method of expansion, with some getting Medicaid and some getting subsidized shitty insurance, would poison the perception of the law, because the working poor would get fewer benefits than people who were or believed to be not working.

“I really think Medicaid is good, but I’m really having a problem with the people that don’t want to work,” she said. “Us middle-class people are really, really upset about having to work constantly, and then these people are not responsible.”

This has long been the basis for (often GOP-stoked) opposition to government support in the US, the resentment that others are getting more, a resentment that often gets racialized via stereotypes about welfare queens.

Importantly, Kliff also dismisses those who complain these rube voters should have known the stakes of voting in Donald Trump, because she didn’t know either.

I spent election night frantically reporting and calling sources, trying to understand what parts of Obamacare Republicans could and couldn’t dismantle. I didn’t know at the time, nor had I devoted the necessary time to learn, until election night.

Mills was wrong about what Republicans would do to Obamacare. But then again, I write about it for a living. And I was wrong too.

In any case, it was a sobering, humanizing report. I hope Kliff follows up on as Governor Matt Bevin makes KY’s ACA worse this year.

Democrats need to learn this lesson because, even if they can’t impose a penalty on Bevin and other KY Republicans for taking away benefits that people currently have, the same process is bound to roll out in states across the country. That is, liberals need to understand this dynamic if they want to reverse the policy changes the GOP are about to roll out.

Unsurprisingly, Democrats are taking away the wrong lesson about ObamaCare from the election. Markos Moulitsas rather notoriously offered this lesson (though not in the context of Kliff’s report). 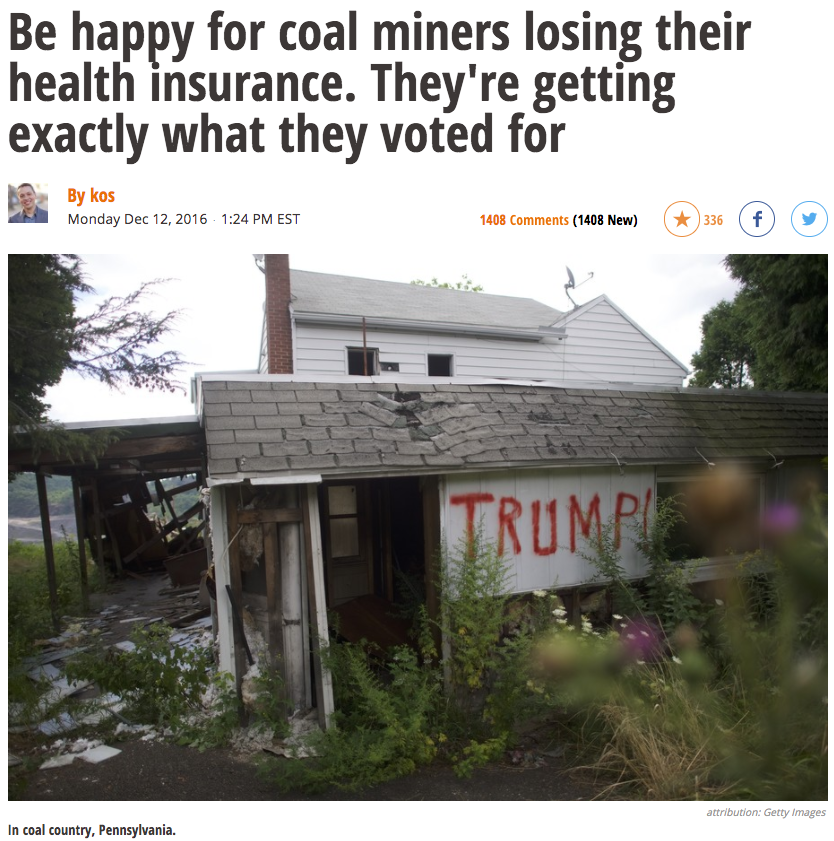 But even Kevin Drum, after reading Kliff’s report, seems to have come up with the wrong lesson.

Obamacare has several smallish problems, but its only big problem is that it’s underfunded. The subsidies should be bigger, the policies should be more generous, and the individual mandate penalty should be heftier. Done right, maybe it would cost $2 trillion over ten years instead of $1 trillion.

Republicans wouldn’t have cared. If this were a real goal—like, say, cutting taxes on the rich—they’d just go ahead and do it. If the taxes didn’t pay for it all, they’d make up a story about how it would pay for itself. And if you’re Donald Trump, you just loudly insist that,somehow, you’re going to cover everybody and it’s going to be great.

But Democrats didn’t do that. They didn’t oversell Obamacare and they didn’t bust the budget with it. They could have. It would have added to the deficit, but that wouldn’t have hurt them much. Politically, the far better option was to go ahead and run up the deficit in order to create a program of truly affordable care that people really liked.

Even setting side whether the problem of providers exiting the marketplace is “smallish” or actually quite big, the one takeaway Drum takes from this article about how a technocratic solution sows hatred for that technocratic solution is just to wonk harder. That is, he wants to keep the existing program, and just throw more money at the providers via subsidies and more penalties at people who are literally choosing between paying for insurance they won’t use or making other choices with limited disposable income.

He ignores entirely how the two-tier system of benefits feeds resentments (not to mention all the unnecessary complexity it entails).

Luckily, being completely out of power, Democrats have another alternative besides just “wonk harder.” Since Republicans will already in in the difficult position of taking away benefits, Democrats can make that much harder — and play to what we’ve learned from the roll out of ObamaCare — by calling for what they should have called for in the first place: something that moves us towards true universal care, rather than just aspirationally universal insurance coverage. Not only is that what KY voters appear to want, but it is a more efficient way of providing health care. Implement it via subsidized Medicare (well-loved because it is universal) buy-in, I don’t care. But this is the opportunity for Democrats to turn the Republicans’ attacks on ObamaCare on their head, and make the policy much smarter at the same time.