Thom Tillis Reminds James Clapper that the US Tampers in Elections, Too 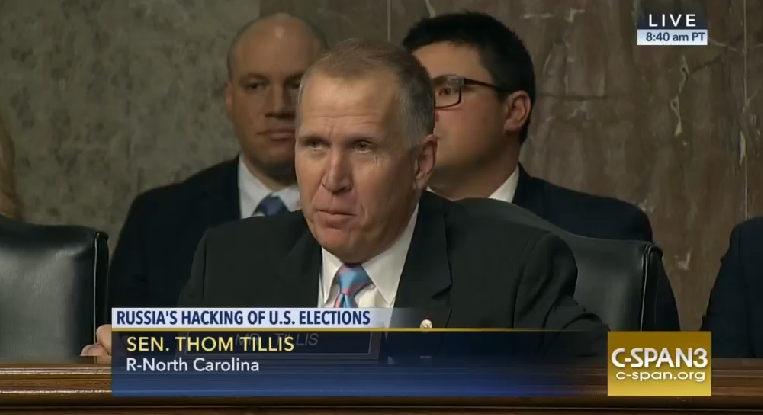 Several times in today’s hearing on foreign cyberattacks on the US, James Clapper explained why he never favored big retaliation for China’s hack of OPM: because he considers it the kind of espionage we engage in too. “People who live in glass houses shouldn’t throw rocks.”

When North Carolina Republican Thom Tillis got his turn, he addressed Clapper’s comment, pointing out that on election-tampering, as with espionage, the US lives in a big glass house.

The glass house comment is something that I think is very important. There’s been research done by a professor up at Carnegie Mulligan that um Mellon that estimated that the United States has been involved in one way or another in 81 different elections since World War II. That doesn’t include coups or regime changes. Tangible evidence where we’ve tried to affect an outcome to our purpose. Russia’s done it some 36 times. In fact, when Russia apparently was trying to influence our election, we had the Israelis accusing us of trying to influence their election.

So I’m not here to talk about that. But I am here to say we live in a big glass house and there are a lot of rocks to throw and I think that that’s consistent with what you said on other matters.

With regards to comparative numbers on US and Russian intervention in elections, Tillis is discussing research published by Dov Levin last year (see WaPo version), who found that either the US or Russia intervened in 11.3% of all elections since World War II, with the US — indeed — intervening far more often (and more broadly) than Russia.

With regards to tampering in the Israeli election, Tillis is probably referring to State Department support for an NGO that worked to oust Bibi Netanyahu.

Curiously, Tillis made no mention of his own state party’s rather spectacular tampering to suppress the votes of African Americans, though perhaps his local experience explains why he presents all this data about American hypocrisy on election tampering as a reality about elections rather than a cautionary tale to be avoided.

Still, even if he’s trying to whitewash Russia’s involvement to help Trump get elected, he does have a point: the US has done this to a lot of other countries.

As Chilean-American Ariel Dorfman put it in an op-ed last year, America’s own election-tampering doesn’t make Russia’s this year’s right, but it should elicit a determination that the US will never again do unto others what we have just had done to us.

The United States cannot in good faith decry what has been done to its decent citizens until it is ready to face what it did so often to the equally decent citizens of other nations. And it must firmly resolve never to engage in such imperious activities again.

By all means, let’s pursue Russia for its intervention in this year’s election. But let’s, at the same time, engage in some accountability for what the US has itself done.

In His Last Words Before Senate Armed Services, Clapper Warns against Congressional... Whither Shadow Brokers in Discussions of Foreign Hacks of America?