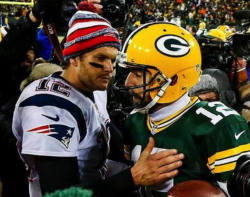 As exciting as the Women’s March was yesterday, and it was stunningly awesome to behold, today we have football. And not just any football, it is Championship Sunday.

First up is Green Bay at Atlanta. The Pack has been on such a roll of late that it is hard to bet against them. But Atlanta has to be favored. They are at home and Matt Ryan has also been on a Rodgers like spree himself. The Falcons also have a better running game. But what really makes the difference is just how banged up Green Bay’s receiving and defensive back corps are. They are running on fumes in both. From the Journal-Sentinel:

Barring any setbacks during pregame workouts, receivers Jordy Nelson (broken ribs), Davante Adams (ankle) and Geronimo Allison (hamstring), and safety Morgan Burnett (thigh) are going to be available, according to a league source. Nelson, Adams, Allison and Burnett all remained questionable after practice Saturday, which means they have a 1 percent to 50 percent chance of playing.

The Packers made one change to their injury report after their Saturday morning practice, listing running back Christine Michael questionable with a back injury.

How bad is it? The Cheese just elevated rookie Max McCaffrey from the practice squad just in case, and he has never played in a real NFL game. Also, Clay Matthews has not been quite the same since suffering a shoulder injury a while back, though he is fully playing. When you get down to it, I just think the Falcons will score slightly more than the Pack, but should be fun to watch. Now if the Pack defense really puts on a game, then all bets are off.

Some healthy scoring and a close game might be on store for Pittsburgh at New England too, though it is doubtful it will be the kind of shootout the first game promises. Big Ben and Tom Brady. Brady is 9-2 against the Steelers and has blistered them in the process. But, as Fox Sports points out, Brady has been rather pedestrian in AFC Championship games:

In 10 appearances in the AFC title game, Brady has a 76.3 passer rating, 12 TDs and 12 INTs. That’s more like Brock Osweiler than Tom Brady.

And for all the talk of Ben, Bell and Brown as an offensive juggernaut, it has been the Steelers defense that has them to this point. The Pittsburgh offense managed just 18 points on 6 field goals last week against the Chefs. But the defense, once again led by the seemingly ageless James Harrison, was tough as nails.

I can’t find a way to bet against the Pats, especially at Foxborough, but this could be a hell of a game. I look for Brady to put up enough points to take this one, and it also should not be forgotten that the Pats are much better than people think at running back, between Blount and Dion Lewis both at full speed. 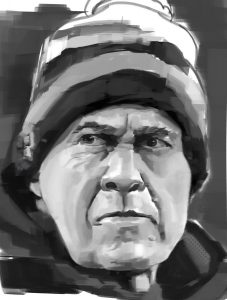 UPDATE: The Steelers were rousted by someone pulling the fire alarm in their hotel as they slept. Authorities have released a forensic sketch of the suspect, and it is attached to the right.

And there you have it. Music today is a brand new song, “Shine” by Pat Benatar done specially for the Women’s March and in support of related causes. It is really pretty kick ass, give it a try.

BuzzFeed Discovers We’re Not the Rubes It Has Claimed, But Insists We... The Problems with Pompeo: A Willingness to Use Information on Americans Russia...