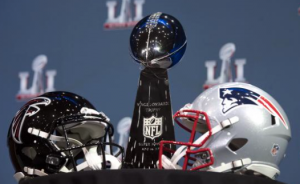 Here we are at the end of another NFL season. And the biggest sports day of the year. As you can see in the title, I have given up on the league’s insistence on Roman numeral designators. We are not in Rome, and they make my head hurt after a while. We are past that while.

The Falcons and the Patriots in Houston. It has, from all appearances, been a fantastic week in Houston, the city has really shined. I am not surprised, Houston has been an under appreciated gem as to municipal government competence and civic activity for quite a while now. And a great town for a wide diversity of excellent food!

A couple of news and notes: Matt Ryan was named the NFL MVP last night, beating out Tom Brady by far more than he should have, but still a fair choice. On a local note, Larry Fitzgerald was made the co-recipient of the Man of the Year Award with Eli Manning. Spidey Fitz is incredible, both here in Phoenix and back in his original home of Minnesota. Well deserved. Also, Kurt Warner was named to the Hall of Fame. Any man that can get both the Cardinals and Rams to the Super Bowl absolutely belongs in the Hall of Fame. Here is a complete list of all the NFL honors announced last night.

As to the game itself, it is quite clear that the politicization from the abject racism and bigotry of Trump, and especially his Muslim ban, are going to spill into the spotlight. Given the publicity platform of an event like the Super Bowl, that is not surprising, but it is stunning as to how much it seems to be so this year. Things are not normal in the US anymore, even if the old “normal” had its warts.

But today’s game is being broadcast by the right wing bastion of Rupert Murdoch’s FOX network. And they are, predictably, censoring the paid advertising content they will show. The video at the top was a 90 second spot that Lumber 84 was desirous of paying full freight for a 90 second ad that bills out at about $5 million per 30 seconds. Would FOX take that money from Lumber 84 for one of the most beautifully produced ads you will ever see? Nope, too “controversial” for the assholes at Fox. Guess they figured their nutjob boy Trump might be watching. Selective censorship.

Interestingly, FOX apparently will air a similarly themed ad from Anheuser Busch, an advertising juggernaut that they cannot risk pissing off. That ad is to the right. Why is it less objectionable than the Lumber 84 spot? Basically because Busch has real ad buying power and Lumber 84 does not. The AB ad is great too, but the complete craven hypocrisy of FOX is on full display here. Can’t have too much advertising space that might upset Dear Leader Donald! I mean, shit, he might lash out in an incoherent tweet!

Alright, to the game. As always, the actual football has been micro-analyzed endlessly for the last two weeks, so I do not have a ton of analysis to add. The focus seems to have been more slanted to the two teams’ offensive capabilities. I will say, I think that is wrong. Both offenses are relatively healthy and potent (except Falcons’ star center Alex Mack will play with a small fracture in his fibula). A decent team matchup rundown from the AP is here.

Instead, I think, as it turns out is usually the case, defense will decide the winner. The Pats have a deceptively decent defense, and, as also is usually the case, they have really gelled down the stretch. The game’s outcome will be decided by how well New England’s defense plays. I have no idea who will win, but I hope it is the Patriots so that the odious Roger Goodell has to hand the trophy to Bob Kraft and Tom Bady.

That is it folks. Eat some food, drink some beer and spirits, and have a ball.