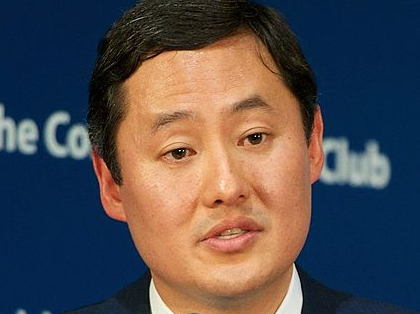 At the end of a John Yoo critique of Donald Trump’s abuses that a lot of people are mis-reading, he says this:

A successful president need not have a degree in constitutional law. But he should understand the Constitution’s grant of executive power. He should share Hamilton’s vision of an energetic president leading the executive branch in a unified direction, rather than viewing the government as the enemy. He should realize that the Constitution channels the president toward protecting the nation from foreign threats, while cooperating with Congress on matters at home.

Otherwise, our new president will spend his days overreacting to the latest events, dissipating his political capital and haphazardly wasting the executive’s powers.

John Yoo is not stating that, across the board, Trump has overstepped his authority. Indeed, the areas where Yoo suggests Trump has or will overstep his authority — exiting NAFTA and building a wall — are things Trump has not yet put into place. His concern is prospective. The only thing Trump has already done that Yoo believes abused power was firing Sally Yates, and that because of his explanation for firing her.

Even though the constitutional text is silent on the issue, long historical practice and Supreme Court precedent have recognized a presidential power of removal. Mr. Trump was thus on solid footing, because attorneys general have a duty to defend laws and executive orders, so long as they have a plausible legal grounding. But the White House undermined its valid use of the removal power by accusing Ms. Yates of being “weak on borders and very weak on illegal immigration.” Such irrelevant ad hominem accusations suggest a misconception of the president’s authority of removal.

Yoo doesn’t, for example, complain about Trump’s Executive Order on Dodd-Frank, which may have little effect.

But what Yoo is worried about is not abuse, per se, but that Trump will “waste the executive’s powers.”

Immigration has driven Mr. Trump even deeper into the constitutional thickets. Even though his executive order halting immigration from seven Muslim nations makes for bad policy, I believe it falls within the law. But after the order was issued, his adviser Rudolph Giuliani disclosed that Mr. Trump had initially asked for “a Muslim ban,” which would most likely violate the Constitution’s protection for freedom of religion or its prohibition on the state establishment of religion, or both — no mean feat. Had Mr. Trump taken advantage of the resources of the executive branch as a whole, not just a few White House advisers, he would not have rushed out an ill-conceived policy made vulnerable to judicial challenge.

Yoo is saying that Trump could have implemented this policy if only he had gotten better advice about how to hide the fact that it was a Muslim ban, in the same way firing Yates would have been fine had Trump offered another explanation for it.

There’s a big rush among those who’ve abused executive authority in the past to rehabilitate themselves by seeming to criticize Trump. Many of them — including Yoo — are mostly complaining that Trump’s bad execution of abuse of executive power might give it a bad name.