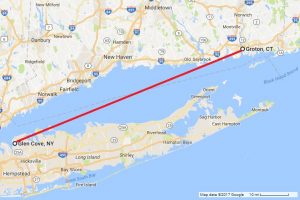 I love maps. They often reveal things quickly and simply in a way text cannot. Like this map I’ve pulled together showing two points recently in the news.

To the right, Groton, Connecticut, where the U.S. has a naval facility

To the left, Glen Cove, New York — the location of a waterfront compound, Killenworth Mansion, owned for decades by Russia. The site was used for electronic spying according to the Reagan administration. A second compound, Norwich House, located five miles away in Upper Brookville, was vacated in December after former president Obama issued new sanctions on Russia in response to alleged interference in U.S. 2016 presidential election.

But none of them mentioned the ship was approximately 60-80 miles from the site of the Russian government compounds.

But is this submarine base more interesting than any of the Navy facilities in Maryland, Virginia, Florida? Not to mention Rhode Island, South Carolina or Georgia. Nor did the spy ship hang around near the other waterfront facility located in Maryland that Russia was forced to vacate in December.

It’s almost if the Russians left something behind on Long Island and were looking for it.

Or listening for it.