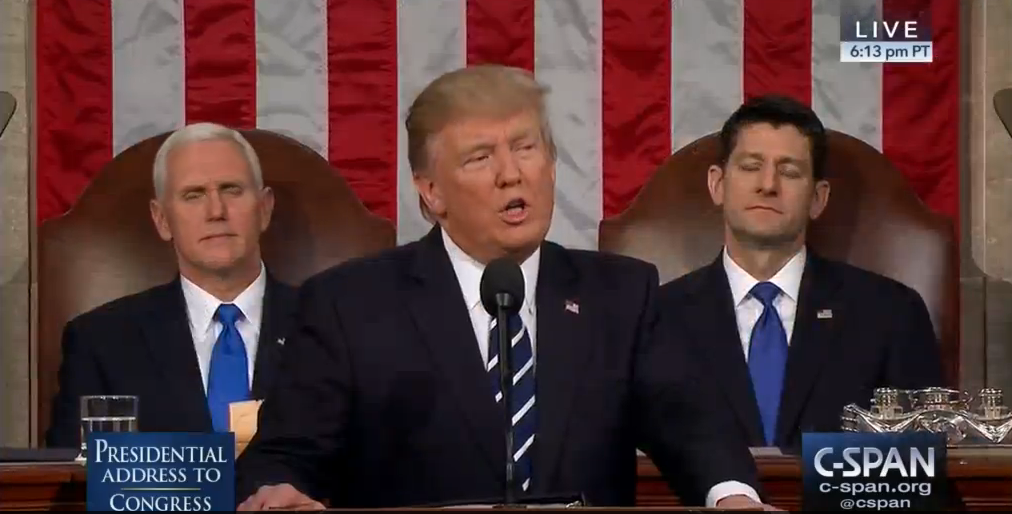 We’ve defended the borders of other nations, while leaving our own borders wide open, for anyone to cross — and for drugs to pour in at a now unprecedented rate.

At the same time, my Administration has answered the pleas of the American people for immigration enforcement and border security. By finally enforcing our immigration laws, we will raise wages, help the unemployed, save billions of dollars, and make our communities safer for everyone. We want all Americans to succeed –- but that can’t happen in an environment of lawless chaos. We must restore integrity and the rule of law to our borders.

For that reason, we will soon begin the construction of a great wall along our southern border. It will be started ahead of schedule and, when finished, it will be a very effective weapon against drugs and crime.

As we speak, we are removing gang members, drug dealers and criminals that threaten our communities and prey on our citizens. Bad ones are going out as I speak tonight and as I have promised.

To any in Congress who do not believe we should enforce our laws, I would ask you this question: what would you say to the American family that loses their jobs, their income, or a loved one, because America refused to uphold its laws and defend its borders? [my emphasis]

But there was one kind of border invasion Trump didn’t mention: that of Russia (and other state hackers) across our borders. In spite of lots of bombast about cybersecurity (and an early focus on a new cybersecurity EO that has apparently been indefinitely delayed), Trump made no mention of cybersecurity.

To be fair, it’s not like the President always mentions cybersecurity. According to my quick review, Obama only did in half his SOTUs.

Third, we’re looking beyond the issues that have consumed us in the past to shape the coming century.  No foreign nation, no hacker, should be able to shut down our networks, steal our trade secrets, or invade the privacy of American families, especially our kids.  (Applause.)  So we’re making sure our government integrates intelligence to combat cyber threats, just as we have done to combat terrorism.

And tonight, I urge this Congress to finally pass the legislation we need to better meet the evolving threat of cyber attacks, combat identity theft, and protect our children’s information.  That should be a bipartisan effort.

America must also face the rapidly growing threat from cyber-attacks.  (Applause.)  Now, we know hackers steal people’s identities and infiltrate private emails.  We know foreign countries and companies swipe our corporate secrets.  Now our enemies are also seeking the ability to sabotage our power grid, our financial institutions, our air traffic control systems.  We cannot look back years from now and wonder why we did nothing in the face of real threats to our security and our economy.

And that’s why, earlier today, I signed a new executive order that will strengthen our cyber defenses by increasing information sharing, and developing standards to protect our national security, our jobs, and our privacy.  (Applause.)

But now Congress must act as well, by passing legislation to give our government a greater capacity to secure our networks and deter attacks.  This is something we should be able to get done on a bipartisan basis.  (Applause.)

To stay one step ahead of our adversaries, I’ve already sent this Congress legislation that will secure our country from the growing dangers of cyber-threats.

Like Trump, Obama didn’t mention cybersecurity the year after disclosure of a massive state-based attack, that of China’s theft of the OPM files.

Still, given how Trump raised the alarm about all sorts of evil infiltrators threatening America, you might think he would have mentioned the Russians (and other state actors) secretly invading and stealing our stuff. “What would you say to the American that loses their credit card number, their identity, their passwords,” Trump might be asked, “because America refused to uphold its laws and defend its borders?”