As long as my schedule permits I’ll continue to post Three Things each day at least through next Tuesday. Here we go…

Day 6: Countdown to Tax Day deadline continues
There’s a clear trend in interest about Trump’s tax returns since the election with a spike reflecting two pages leaked from Trump’s 2005 return on Rachel Maddow’s show last month. Stretching out the Google Trends period to five years and a seasonal bump can be seen each year. This year’s seasonal bump is completely distorted by discussion of Trump’s returns.

59 Tomahawk missiles launched at Syria and a GBU-43/B MOAB dropped on Afghanistan aren’t going to change this picture. Where are your tax returns, Trump?

Bombs away
Speaking of missiles and bombs, I sure hope somebody is watching transactions related to military industrial complex stocks. The image here includes just three companies, one of which is Raytheon, the maker of Tomahawk missiles in which  Trump may or may not own shares. How convenient for shareholders of record last Friday the stock went ex dividend this Monday after a spike in price late last week when 59 missiles were aimed just off a Syrian runway. 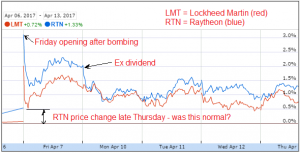 Considering both Russia and Syria knew in advance the US was deploying missiles, one would be foolish not to wonder if any one with vested interest in NYSE:RTN or competitors might also have known in advance to buy before the 01:40 UTC launch with a sell order for Monday’s open. For those of you mentally checking off time zones of key cities and major stock markets:

Get Carter 2
I’d much rather talk about a second installment of the 1971 movie featuring Michael Caine but no, it’s all about Carter Page and his less-than-stellar ability to prevaricate about his dealings with Russians. While quizzed by ABC’s George Stephanopolous about the chances sanctions were discussed by Page and Russians during the 2016 campaign season, Carter replied, “Something may have come up in a conversation…”

Uh-huh. Imagine somebody at the FBI cutting to a taped conversation or two at that point. Page insists he didn’t ask or offer about the sanctions, but he’s wholly unconvincing. It’s no wonder at all known Russian spies in the Buryakov case were skeptical about Page, a.k.a. ‘Male-1’. Whatever Page claims there was enough there to pass the threshold requirements for a FISA warrant.

Why is Page talking to media now anyhow? Is he somebody’s canary-in-the-coal-mine? Definitely not a FISA warrant canary.

That’s Three Things. By the way: about 22 percent of taxpayers wait until the last two weeks before the deadline to file. Tick-tock — only a handful of hours until Day 5 before deadline.