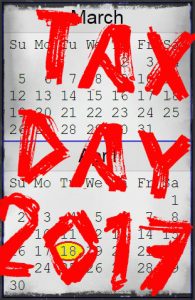 Day 1: Tax Day
You have today until midnight local time today to file your federal income taxes or file for an extension. As of midnight, Trump owes us yet another federal tax return.

And no, Trump’s federal income tax return for 2016 is NOT under audit as the deadline hasn’t even passed. Even if an audit of Trump’s 2016 filing began tomorrow there’s no excuse for not disclosing what has been filed with the IRS regardless of audit status.

What made America great has been its lower rate of corruption and clear expectations of oversight and governance. What makes America less than great is a failure of governance, lack of transparency, and increasing corruption. Why would any foreign individual, or company, or country invest in the U.S. when they can no longer reasonably expect fairness and security from our government? Trump’s behavior (and that of his family and his corporate holding structure) placing himself beyond the law undermines our strength. This cannot continue.

Steve Ballmer’s gift: USAFacts
Admittedly, I was never very crazy about Ballmer as CEO of Microsoft. He continued Bill Gates’ flawed ideology after Windows reached near-ubiquity, suppressing Microsoft’s value and negatively influencing the tech industry for too long. What a pleasant surprise, though, to learn about his retirement hobby: USAFacts, a Big Data initiative tracing the flow of tax dollars using government data.

The project began after Ballmer’s spouse prodded him to do more philanthropically. He resisted because he paid a lot of taxes; weren’t his tax dollars enough? Mm-hmm.

He learned a lot, and I expect we will be, too, as USAFacts matures. Some ugly truths have already been exposed to people like Ballmer who might not otherwise have looked — like the power of the gun lobby to suppress government reporting, or the inability of children to rise from poverty.

Ballmer’s redeeming himself. I only hope his project can get out in front of the Trump administration’s rapid decimation of government reporting.

Microsoft: a very different gift
Systems administrators who manage Windows-based enterprises aren’t very happy with a change Microsoft made to its security bulletins — they’re gone, replaced by a searchable database.

Which sounds all fine and dandy in theory until reality meets the road. Just read users’ feedback and you’ll quickly grasp additional workload has been pushed off onto administrators who already have quite enough to do. SANS Internet Storm Center looked swamped by the change.

Elimination of the security bulletin format had been expected since last November and anticipated for February. It’s not clear if there is a relationship between the unusual patch pushes February and March and this new security updates database.

One meager upside: malicious hackers will have just as much difficulty (or more) determining what was patched as will Windows administrators.

Speaking of hackers, I should note here I may be a minority report on The Shadow Brokers (TSB). The manner in which the last three months of Windows’ security fixes have been handled — which included many key vulnerabilities in advance of TSB’s latest NSA toolkit dump — suggests somebody inside Microsoft already knew what to patch months ago. Perhaps even last year when the change to security bulletins was announced given the amount of lead time needed to fix complex vulnerabilities.

Further, Microsoft had been compromised once some years ago that we know of by a Russian spy. Recall the roundup of the Illegals Program by FBI in late June 2010 when ten Russian sleeper agents including Anna Chapman were taken into custody and deported less than two weeks later in a spy swap. An eleventh agent had been picked up in Seattle where he worked for Microsoft. Reports said he was a only entry-level software tester who had established employment under his real name, Alexey Karetnikov. He first worked as an intern for Microsoft in the summer of 2008, then hired on full time in October 2009 after a gap year in Russia. (Karetnikov wasn’t the only Illegal Program spy in the Seattle area; a spy using the name ‘Tracey Foley‘ had been hired to work for a real estate company’s Seattle branch but had not fully established a presence in the northwest by the time she was arrested. There didn’t appear to be an immediate link between Foley and Microsoft or any Seattle-area technology company.)

What did Microsoft do after they learned about Karetnikov’s presence? When did they learn about him — before his arrest, or only when the arrest took place? How did MSFT mitigate risks, including the possibility there were other undisclosed spies in their ranks? Is TSB really a means by which now-useless or exposed tools are rolled up while being used as a honeypot? Could explain why linguists say TSB is likely English-speaking masquerading as non-English speaker.

We’ll probably never know for sure.

Three Things: Not-So-Neutral, Day 2 and Reading Dana Boente Still Has a Job and Why That’s of Interest for WikiLeaks