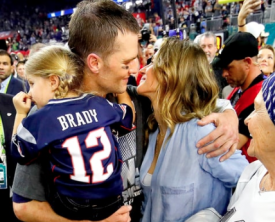 This was “supposed” to be a far better post than you are going to get. But I have had a couple of tough days in court, and this is what you are gonna get! Sorry!

Locally, the question is what will the Cardinals do? Carson Palmer will return for 2017 and, assuming healthy, he is really pretty good. Not inconceivable he plays in 2018 too, zoo a rook may get 1-2 years seasoning from a very good film study and preparation QB. Local chatter is Bruce Arians and Steve Kiem quietly are dying to take Patrick Mahomes from Texas A+M and groom him. Kid has Brett Favre, seriously, potential as to arm strength and play making capabilities. He also has Favre’s gunslinger recklessness. Frankly, I like him and think, if available, the Cards should take him with the 13th pick and hope Palmer can school him up, ala Aaron Rodgers with the original gunslinger, for two years before he takes control. I would also think Davis Webb, with a big frame and big arm, and who grew up as a coach’s son, would be pretty attractive.

Okay, as to other teams, I was FORCED into being a Patriots fan, not by the lady of the house Marcy, but by the jackass of the world (other than Trump and whatever gel headed midget is running North Korea currently), Roger Goodell and Deflategate. As the last Super Bowl proved, in stunning fashion, Bill Bel, Tom Brady and the Pats are still here. They arguably have already won the offseason by incredibly shrewd free agent dealings, but they don’t have a ton of high draft slots.

As to the rest of the teams – I think, despite the attempts at misdirection, Cleveland will take Myles Garrett at number one. Is that the right choice? Eh, I dunno, but it is probably a safer bet than Mitch Trubitsky, who has started a grand total of 13 games in a weak college football conference. Will the Brownies use a few of their famously accumulated draft picks to move up and take both Garrett and Trubitsky? Now that is a good question.

Where will the other QB’s go? Deshaun Watson, DeShone Kizer, Patrick Mahomes and my favorite sleeper…..Davis Webb of Cal? That will be fascinating to watch.

Where will Leonard Fournette and Dalvin Cook go? Dalvin Cook, as great as Fournette looks, may actually project better into the pros because of his pass catching and ability to make space on the fuel happen in an instant. Ezekial Emanuel to the Cowboys last year showed just how fundamentally a great dual purpose running back can still alter the game.

Besides Garrett, on defense, Reuben Foster, even if a bit of damaged goods, seems like the real deal for a linebacker. The kid out of Temple though, Hasson Reddick, is a HUGE sleeper. Watch out for this guy for a loooong time to come.

All right, gotta fly for now. Enjoy the draft, and chip in before, during and after. Listen, the NFL is all about money, so how about a song about the original Money Honey. We just passed, a couple of weeks ago, the 16 year anniversary of Joey Ramone’s death. Where the fuck did the time go? It, seriously, seems like yesterday. So, here are the Ramones with “Maria Bartiromo”. If this doesn’t light you up, you might be dead already. And, yeah, Maria thought it was awesome too. Keep on keeping on folks.